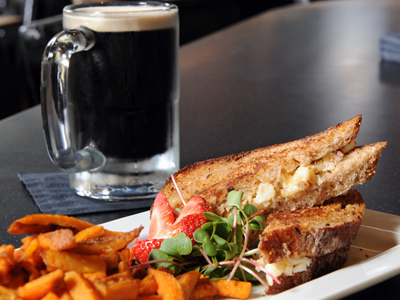 Don Wilson and Tina Luciani certainly know how to make their mark wherever they go.

It's been the couple's penchant to open restaurants. And with their recent move to Oakville, from Vancouver, they have continued this pattern.

The Gingerman Social Eatery opened in October, in the Kerr Street Village.

It's a name they had registered a long time ago. “I like the term “˜social eatery' for its unobtrusiveness and broadness,” Don says. “It lends itself to a diverse menu.”

Don and Tina teamed up with Chef Bradley Taylor, who was keen to come back to Oakville after hurricanes in the Caribbean wiped out restaurants he owned in the island countries of Grenada and St. Lucia.

“He brings a nice colour, flair and taste profile to the menu,” says Don. Taylor creates it all from scratch, from homemade sauces and desserts. “He's capable of everything,” adds Don. Chicken, fish, steak, burgers, tenderloin and pastas are all recreated with Taylor's culinary magic.

Gingerman's eclectic menu is attracting a wide and travelled clientele from young families to the work crowd to the senior's set all across town and beyond the local borders; from those looking for a quiet lunch with friends, to the sports crowd keen to watch the game to couples out on date night.

“It's like fine dining in an easy, relaxed atmosphere for foodies,” says Don who has been in the restaurant business all of his working life.

Just as soon as he finished university he was in business. With two friends, he opened Benny's Bagels in Dallas, Texas back in 1994. The New York-style boil and bake bagels became a whopping success growing to 30 stores in major cities across the state over five years.

Don moved on to Vancouver where the entrepreneur opened another eatery. This time it took the form of a sports bar with live music in the mix. Called the Copper Tank Grill it would prove to become a success in more ways than financial. This is where Don met Tina. Their wedded bliss would inspire a second Copper Tank location to open just seven years after the first one. The couple ran both for three years but when Don and Tina's two little girls were born, the pull to be closer to family overpowered. So the Ontario natives packed up and headed east, to Oakville last November. In less than a year The Gingerman Social Eatery was born.

The interior has had a complete facelift and all furniture has a west coast influence, of solid wood, repurposed brick, frosted glass and stainless steel, thanks to Don and Tina's design input. Patrons can even peek into the gleaming stainless steel kitchen from the dining room to watch Taylor and his team at work.

The vault of the former bank is now a private room for up to 10 friends, coworkers or family to hold a meeting, game or intimate celebration. A 62-inch plasma television is here too, with a large table and its own distinct menu items. Pre-booking is required and there's no charge for the room use.

Weekend brunch is in the plans, as well as a patio for next summer.

There's an interesting lineup of microbrews on tap to impress any beer connoisseur, even one Don couldn't part with when he left the west coast called Granville Island Pale Ale. Single malt scotches and an extensive wine list fill out the bar selection.

Coffee is served in bodums at the table to ensure freshness.