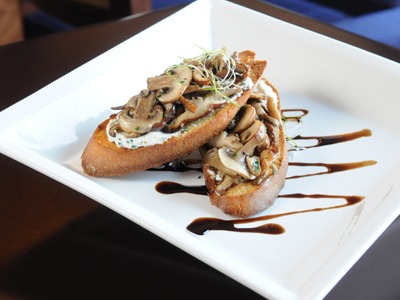 What exactly, is a gastro pub? It's a question often asked by first-time visitors to Burlington's first and only restaurant of the kind.

Scottish-born Edward Catley is the man behind bringing the concept born in Britain to Dundas Street West near Walkers Line, home to the Purple Heather Gastro Pub. Pick up a menu and you'll find the answer to that often-asked question: Gastro is short for gastronomy, which is the art and science of good eating.

“In essence what it really means is we put an emphasis on our food,” says Catley, the restaurant's owner and a long-time Burlington resident who now calls Hamilton home. “It's not just about alcohol for us; it's really about food. We recognize that food is the engine of all restaurants, and we're operating with that focus here.”

Conventional pub fare like fish and chips, macaroni and cheese, and burgers are all available at Purple Heather, but in a gastro pub, as Catley puts it, “we have taken pub food to a new level.”

All the food is made from scratch, it's fresh and much of it is local. “Most pubs obviously have fish and chips,” he explains. “We still do that, but we raise the bar and we also do things like beef bourguignon, our shepherd's pie is actually braised lamb and bison. We even have tapas and charcuterie, and we cure our own meats.”

The macaroni and cheese? It comes with lobster. That dish, along with the shepherd's pie, is a favourite for the restaurant's regulars. After opening its doors last December, Purple Heather has already attracted a crop of regulars among residents living in the neighbourhood who, before it opened, did not have a pub to call their own.

“The community at large has opened their arms to us, and we're very pleased with the response,” Catley says. “We're hearing people say, “˜We've been waiting for a place like this we can walk to, a place we can call our own and go to with friends and family.'”

It's why Catley ““ also owner of the Queen's Head and Slye Fox Pub in Burlington, as well as Oakville's Abbey Arms ““ decided to go with the gastro concept at the Purple Heather.

“There was nothing around the area that intrigued me in terms of food,” he explains. “We just couldn't find it, so we built something we knew would appeal to those foodies and winies. Foodies like us because the food is fresh, it's splendid. Wine people like us because we have not only a large array of wine, but some exclusive, neat different wines that not a lot of people have tried before.”

The restaurant features a back bar in a rich, dark mahogany wood that measures 35 feet in length. Much of the décor is gold and deep purple, the latter in reference to Purple Heather. The restaurant is so named for the purple heather that decorates the hillsides of Scotland.

Other Scottish lore you'll find at the pub includes a popular non-traditional haggis prepared with duck, lamb and bison. There are a number of pies including a classic Scottish meat pie, as well as a selection of single malt scotches and Scottish beers. Among the musicians who play Friday and Saturday nights is a Scottish Gaelic entertainer who plays the bagpipes.

The entertainment is a hit with the restaurant's customers, as is the patio that seats 60 on warm summer days.

“In a very short period of time we've created a very large repeat customer base that regularly comes in, and brings friends,” Catley says. “We've been very lucky in that people have embraced us so quickly.”