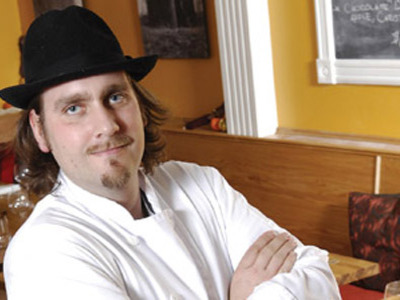 For years the seasoned chef travelled outside of his newly adopted hometown of Burlington to work because he couldn't find a restaurant closer to home that offered the type of menu that captured his interest. So, nine months ago, he decided to do it himself.

The Red Canoe Bistro is the result of his endeavour.

Pohl-Weary said he found the “perfect” location downtown and the “perfect” space at 398 John Street. A quaint restaurant on the main floor, and event space that holds more than 70 people on the second floor, are fast becoming popular venues, as word of Red Canoe travels across the area.

Pohl-Weary describes his cuisine as “modern Canadian” and the name of his restaurant pays homage to that.

“The canoe is a solely Canadian emblem,” he says, although he admits the watercraft he owns is actually green.

But amid this fine fare casual comfort is key.

“I don't want a stuffy environment, I want a restaurant where the food, wine and service is unmatched, and unparalleled and the atmosphere is relaxed.”

As far as the décor goes, it is replete with nature's resplendence of oak, birch and cedar wood. Lining the shelves are jars of house-made preserves that carry the locally grown bounty of summer's fruits and vegetables, as does a bevy of expertly selected wine, spirits and beer chosen by Red Canoe's Sommelier Kelly Saunter.

“She has a brilliant understanding of the craft,” says Pohl-Weary, who describes the collection as one-third old world, one-third new world and the remainder Canadian vintages, including local micro-breweries.

The word “˜local' is part of the daily lexicon at Red Canoe with the majority of the ingredients for the entrees, appetizers and desserts being culled from area crop and cattle livestock farms. The menu is influenced by years of experience in the field. Born in St. Catharines and raised in Toronto, his classical training began early, at age 16. He began his apprenticeship at Toronto's King Edward Hotel. The young chef later continued his apprenticeship at finer restaurants all across the country and for seven years he travelled the world developing his technical prowess in the kitchen.

Along the way he met world-renowned Canadian Chef Michael Stadtlí¤nder. Well ahead of his time the trailblazing “localvore's” latest claim to fame is his 100-acre farm in Georgian Bay called Eigensienn. It's a German word that means single-minded, and describes his passion for creating a closer connection to all that we eat.

This philosophy fits well with Pohl-Weary's love of the outdoors.

As much as technical skills can take a chef far in the restaurant world, knowing how to choose the best ingredients takes a meal to the next level, he says. “Properly cooked and raised beef and even potatoes taste better when they are gathered from the right sources.”

On the last Thursday of every month (and on special occasions) Pohl-Weary and Lalonde put their creative talents to the test, concocting seven-course tasting menus (smaller five-course versions are offered nightly) to keep the menu interesting and remain true to the Canadian and local focus of Red Canoe.

“Our goal is to serve food as perfectly as possible and the staff here are all experienced foodies who also put as much care and attention into the whole gastronomic experience as I do.”