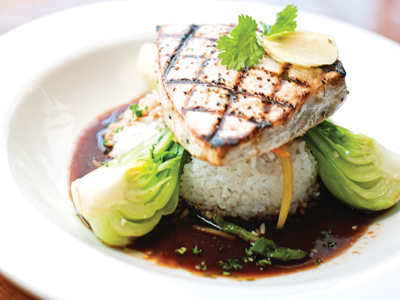 “When we first opened Walkers Fish Market in Burlington almost three years ago, we didn't plan on opening more in the area,” Bell says. “But now there are four.” Walkers Fish Market is part of The Pepperwood Group, a regional independent restaurant company competing with corporate-owned chains popping up on every recently developed corner. Even though the company is also responsible for La Costa Nuovo, The Big Tomato, Pepperwood and Rosewood Bistro, it's Walkers Fish Market that's proving to be, well, the big catch.

Why? First, Leslie attributes a trend towards healthy eating responsible for turning people's attention towards fish as a desirable option. Second, from a food management perspective, seafood is not the easiest product to deal with. “It has a short shelf life,” he says. “By opening four fish restaurants, we go through a lot of fish so we are now able to buy in larger quantities from our supplier. We only use fish from sustainable stocks. For instance, there are parts of the world where sea bass is plentiful, and we don't serve controversial dishes like shark fin soup.”

While there are many menu standards that don't change between the Walkers' menus, the list of fresh catches and oysters do. And the list of options changes daily (every menu is dated and handed out like sheets of paper from a pad), and it can vary between restaurants depending on seafood supply, local demand and the individual chef's preferences. Executive Chef Michael Levin oversees the general direction of Walkers' menu, and he works out of the Milton restaurant so that's ground zero for dish design and direction. For instance, one day in late November saw Costa Rican Tilapia, Ontario Pickerel and Louisiana Catfish on the selection list alongside Hawaiian Ahi Tuna, Icelandic Arctic Char, and Nova Scotian Atlantic Salmon. Each is prepared to customer taste: steamed, grilled, broiled or bronzed (a spicy Creole sauce).

Milton may be landlocked, but thanks to modern transportation methods, the saltwater bounty is at the doorstep. Walkers Fishmarket is, according to the menu, “committed to providing our customers with the freshest fish and seafood from around the world.”

And just when you might be thinking this is too rich for your (or your kid's) tastes, both Bell and Leslie admit Walkers' Fish and Chips (haddock coated in a signature Pepperwood pale ale beer batter) is still the number one seller at all locations. “We might look like an upscale restaurant,” Bell says. “But that's one comment we get a lot: this is a very appropriate restaurant for families and most like our kids' menu.”

The Milton location, near the newly opened Longo's, is definitely more of a dinner draw than other locations closer to office buildings, and being beside the Galaxy Theatre means a crowd before and after movies, especially if blockbusters are playing. But that doesn't mean people in this city of 70,000 (and growing) don't like to unwind ““ kid free ““ especially after work. “Late afternoon, oysters are popular especially on Thursdays when they are free with a drink purchase in the bar from 4 to 6 p.m.,” Leslie says. “We call this Happy Thursdays.”

While raw bars are trendy in major cities located closer to ocean edges, they're scarce as pearls west of Toronto. Oyster variety, however, is more plentiful than most know, and savouring the diversity of flavours can be similar to wine tasting. “There are more than 200 varieties of oysters in the world,” Leslie says. Walkers Fish Market always offers Malpeque and two or three other options. “People like to sample the different tastes. Like cheeses.” he says. “Oysters are shucked in front of the customer and sit on ice on the raw bar. They pair well with white wines like a Sauvignon Blanc, but they are also great with beer. On Thursday night, we have an Oyster Caesar drink ““ it's a shot glass of spicy Clamato-based cocktail with an oyster in the bottom.”

Leslie is most enthusiastic when discussing the restaurant's menu, inspired by travels he's taken around the world. “We offer a fabulous traditional cream-based East Coast clam chowder,” he says, “but we also have a San Francisco Ciopinno because the West Coast is often associated with a healthier lifestyle.” The Ciopinno, unique to the Bay City, is a tomato-based soup, almost like a bouillabaisse. “It's a great deal because it's full of fresh fish. We butcher our own fish here and the smaller pieces go into this fish soup along with shellfish like mussels, shrimp and clams.”

For land lovers who prefer their meals raised rather than reeled in, Walkers Fish Market offers sirloin, filet mignon, striploin and hamburger from the grill. But why miss the boat? Walkers brings the world's oceans to you.