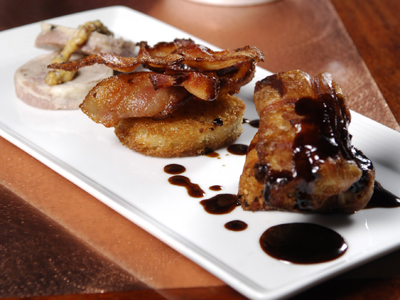 Matt Kershaw is that new breed of 30-something chefs and restaurateurs: easy going, understated, and remarkably confident that his innovative ideas about dining out and foodie tastes will be successful.

There's a remarkable lack of pretension at The Alex, Kershaw's dinner/bistro blend restaurant on Brant Street in downtown Burlington ““ somewhat surprising considering frogs legs, pickerel cheeks, braised lamb shank and ox tails are practically staples on the menu. Some might say this former Hamilton Golf and Country Club chef who apprenticed at the Royal York in Toronto followed in the footsteps of his brother, owner of the posh Rousseau House in Ancaster. But food lovers would likely argue that he's forged his own path, rejecting stemware and table clothes for a down-to-earth love of all things perfectly peeled, poached and prepared.

The Alex is about loving to eat ““ not scarfing down large quantities ““ and savouring smaller portions for reasonable prices, allowing patrons to sample a number of offerings, tapas style, rather than committing to one entree per evening. Now the meat-centric Rapscallion, a self-proclaimed “rogue eatery,” on Young Street in Hamilton further embraces Kershaw's culinary passionate and irreverent dining concept.
Considering you grew up in Hamilton and worked as a chef in Toronto, why choose Burlington as the site of your first solo endeavour?
The Alex has been in Burlington for about two years. I first wanted to open in Hamilton. When I was looking for locations, I sat in my car for hours watching people go by and asked myself, “Can I picture these individuals walking into my restaurant?” It wasn't encouraging. Then I came to downtown Burlington and realized this is a happening place. I did the same thing: watched everyone walk by and realized about nine out of ten people I saw would walk into the type of restaurant I had in mind. So I renovated an existing space, keeping the booths to maximize seating. I did end up opening Rapscallion in Hamilton as well, primarily because the buildings there are so affordable.

When you eat out, what do you order?
When I go to other restaurants I look for something I haven't had before, or something prepared in a different way. I have a tendency to choose the meatiest, fattiest dish that is most unhealthy like short ribs or anything with bacon. I'm not kidding.

What is your favourite dinner party dish?
I don't get invited out for dinner much. People seem to think my expectations will be too high. But the truth is, I grew up on over-cooked lamb with potatoes and gravy and that's still one of my favourite dishes. So is macaroni and cheese… When I cook for people at home, I don't care about burning anything. It's more about having fun. The first time I invite people over they might expect an over-the-top menu, but they soon learn it's more about the company.

Have television shows improved customers' food education?
Definitely. Yes. I literally have kids come into the restaurant and order medium rack of lamb and know what they're talking about.

What was the most important lesson you learned at chef's school?
I'm not a fan of going to school to learn how to cook. Are you the right person for the job? Do you love food? Who did you cook under? These are questions asked when hiring chefs… Do you have a natural love for food and ““ it sounds corny ““ but can you add that ingredient to the dishes you create? School is ok, but you only do everything once. I encourage people to get paid to learn, because if you've done something for 10,000 hours, you know how to do it.

What's next?
Possibly a food truck. I'm going to Niagara Falls next week to look at one. Will it happen? I don't know. But I love the idea.
RECIPE: Bacon-Wrapped Bacon Trio