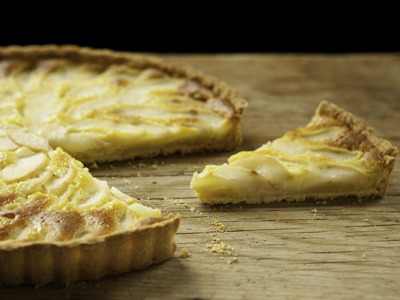 There is no tree among all those planted which abounds so much in kinds of fruits as the pear tree, whose different sorts are innumerable and their different qualities wonderful”¦. so excellent are the fruits that an orchard would not be worth while in a place where pear trees do not thrive.” ““ Le Theí¢tre d'Agriculture (1608) by De Serres, the French father of agriculture

During autumn in Ontario, the last of the tender fruits to come to season becomes available: the pear.

Thought to be one of the first fruits brought to North America from Europe, pear trees were growing in Massachusetts 350 years ago. In Ontario, the most popular variety ““ Bartlett ­”“ is in season through mid-October, making a perfect addition to your fall dishes.

The pear originates in Asia and Europe and is from the genus pyrus. There is no exact date as to when the pear came into existence, but looking to past texts, paintings, and artifacts has lead to a general timeframe. In Switzerland, dried pear slices were discovered in cave dwellings from the Ice Age, which took place between 60,000 and 30,000 BC. In 1749 when Pompeii was unearthed, paintings featuring pears were discovered in the ruins. Pears are also mentioned in Chinese writings that are up to 3,000 years old, and can also be found in Ancient
Roman texts.

By the end of the Endo period (1603-1868) there were an estimated 150 pear cultivators in Japan alone. During this period pears were placed on the corners of property to ward of misfortune, and were also considered a delicacy for the wealthy in Asia. Additionally, pears have been featured in many religious renaissance paintings such as the 15th Century painting Madonna of the Pear by Giovanni Bellini, and are called “the gift of the gods” in Homer's The Odyssey.

Healthy Pears
One pear contains 100 calories and is rich in vitamin C, dietary fibre, potassium and folacin. Due to their high level of dietary fibre, pears are linked to a reduced risk in colon cancer, and general colon health. Pears are also fat, cholesterol, and
sodium free.

Selection, Storage, and Preparation
Pears are available all year in Canada as they are shipped in from other countries, but are best in August and September when they are in season. Select pears with a firm body and little to no bruising, scratches, or cuts, which are the right colour for their variety.  Ripen pears at room temperature, or speed up the process by placing pears in a plastic bag with bananas. When pears are ripe, wrap individually in paper towels and place them in a plastic bag in the refrigerator.  Use pears within the next couple of days.  Pears absorb surrounding scents so be sure to place far away from items such as onions when placing pears in the fridge. Freezing pears involves selecting ripe, good-quality pears to guarantee a good final product.  If pears are over-ripe they will become mushy with freezing, or they will stay hard if they are unripe. After selecting your pears, peel and seed them, then cut into halves or quarters.  Blanch pears in boiling lemon water for a few minutes, then drain and cool under cold water.  Your pears should keep for six months to a year.

Did You Know?
– Pears are part of the rose family
– Pear are made of 83 per centwater
– It takes six to eight years for a pear tree to produce fruit after being planted. Some pear trees can take up to 15 years to reach full fruit production.
– Most pear trees need a “friend,” another variety of pear plant, to be planted in close proximity to them to help with cross-pollination.
– Pears are often recommended as the first fruit to introduce to babies as they have an extremely low risk for allergic reaction.

Pear Varieties
There are five main pear varieties that are grown in Ontario: Bartlett, Anjou, Bosc, Clapp's Favourite, and Flemish Beauty. Of all pears, the Bartlett (Williams in Europe), is the most common pear in the world.  But that doesn't mean there aren't many other important and popular varieties. There are thousands of pear varieties worldwide; here are just a few of the most popular, edible, pear varieties.

Red Anjou: Similar to the Anjou, the Red Anjou becomes sweeter as it ripens and has maroon skin.

Asian Pear: Much like apples, Asian Pears are round and crisp with pale yellow to golden skin.

Bartlett: Bell-shape, sweet and versatile, with green skin that turns yellow as it ripens.

Bosc: Standard pear shape with a long neck and russet coloured skin, the Bosc pear's flesh is crunchy yet smooth.
Clapp's Favourite: Bell-shape, with sweet white flesh, and golden yellow skin.
Comice: More rounded, this green-yellow pear with an occasional red blush has a fine grain texture that yields a smooth, sweet flavour.
Concorde: Bell-shape with a very long neck, yellow-green skin and sweet, juicy flesh with a hint of vanilla.
Starkrimson: Bright red skin, smooth in flavour, and very juicy, best eaten while firm.
Flemish Beauty: Large, green to clear-yellow blushed skin with white flesh that is juicy, and buttery yet sweet.
French Butter: Light green to pale yellow in colour, with a  shape similar to that of the Bartlett. Soft, rich flesh with a hint of lemon.

Seckel: Small, but slightly larger than the Forelle, with a round body, very short neck, dark green skin which often has a maroon blush, and sweet grainy flesh with a subtle hint of spice.