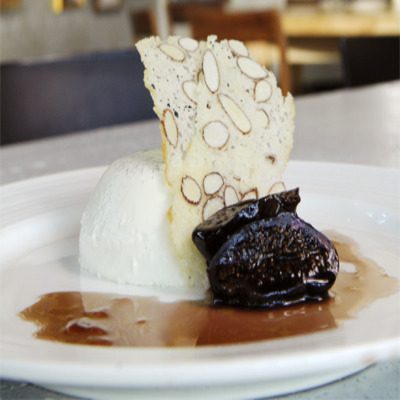 Reduce the wine, sugar and cinnamon by half on high heat. Lower the heat, and add the figs. Keep them moving in the pot on a low simmer until they are tender to the touch, this will take about six to eight minutes. Place them in the refrigerator to cool. They will keep for three to four days. Add gelatine to milk. Heat the cream, sugar, vanilla and lime zest but do not boil. Let the flavours infuse for eight to ten minutes then strain. Whisk in the gelatine and milk while still warm. Add Frangelico. Cool the mixture in an ice bath while continually stirring until it has thickened but not quite set. Gently fold in the whipped cream. Fold the mixture into 4oz ramekins and let them set in the refrigerator overnight. Serve the panna cotta and figs with biscotti or some amaretti cookies.