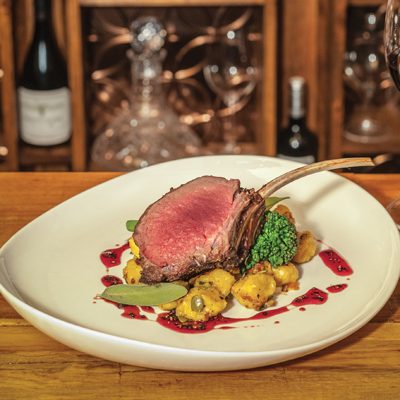 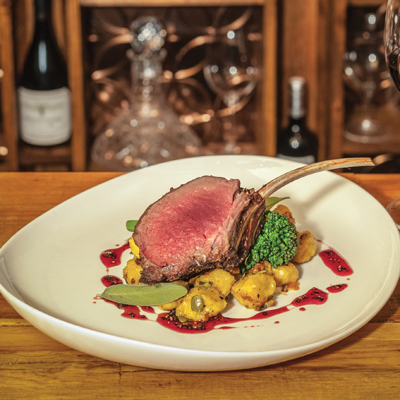 -courtesy of Enver's of Morriston, Morriston

One day in advance, combine the olive oil, parsley, thyme and two cloves of garlic with the venison and marinate in the fridge overnight.

For the gnocchi:
Preheat oven to 450°F. Cut the butternut squash down the centre from top to bottom and scoop out the seeds. Place the squash, cut side down, on a lined baking sheet and put it in the oven for 45 minutes or until it is fully cooked and easily pierced with a knife. Scoop the roasted flesh from the squash shell and discard the skins. Place the flesh in a food processor and purée until smooth. Remove the flesh to a bowl. Season liberally with salt and pepper. Add ½ cup of cheese, eggs and flour and mix well. The consistency should be that of mashed potatoes. Cover and allow the dough to rest for 20 minutes. Meanwhile bring a large pot of water to a boil and season with salt. Place the dough in a large piping bag. Prepare a bowl of ice water and keep it close by. Start piping the dough into the boiling water cutting it off with a knife every one inch. As the dough cooks it will rise to the surface of the water. At that point scoop it out with a slotted spoon and into the ice water. Continue this until all the dough is cooked.  Strain off the gnocchi and lightly oil it. At this point the gnocchi can be held in the refrigerator covered for up to three days.

For the glaze:
Combine the pomegranate juice and honey in a non reactive pot and reduce over medium heat until thick and syrupy. Add the peppercorn and set aside.

For the venison:
Heat a large ovenproof pan over high heat. Remove the venison from the marinade and season with salt and pepper. Sear the rack in pan until browned on both sides. Place the venison in the oven and roast for approximately 25 minutes turning over once. When the venison reads an internal temperature of 135°F, remove from the oven and allow to rest in the pan for 15 minutes. While the meat is resting, heat a large non stick fry pan over medium-high heat and add three tbsp of olive oil. Add three cups of cooked gnocchi to the pan and allow it to brown, tossing occasionally. Add the shallots, and minced garlic. Cook one minute and add the white wine. Cook one minute and add the stock. Toss in the cranberries, pepitas and cheese. Season to taste and divide amongst four plates. Cut the roast into chops and put two chops on each plate. Drizzle with the pomegranate reduction and serve.