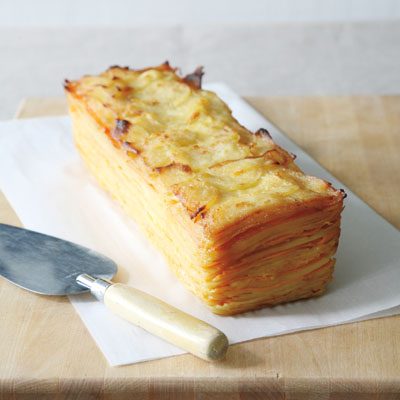 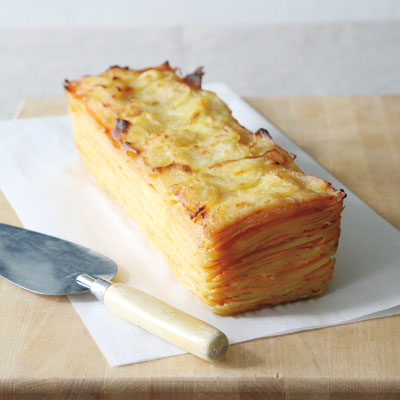 -recipe and photo courtesy excerpted from

“I serve this beautiful layered terrine whenever the occasion calls for something special. It gets its distinctive shape from the mold, but a loaf pan does the job as well, if you don't mind a squatter, more rustic version. The terrine is straightforward, but it takes time to assemble. A mandoline or hand-held vegetable slicer makes slicing a breeze. Once the terrine is baked, it can be refrigerated for up to 3 days. It can be reheated in its container, or sliced as needed and heated in a hot skillet until the edges are crisp and the centre warm.” Makes 1 terrine (8 to 10 servings).

Lightly butter an ovensafe 11x 3.5-inch terrine mold or an 8- x 4-inch loaf pan, then line it with parchment, leaving an overhang of a few inches on each side. (The butter keeps the parchment in place and the overhang is handy for releasing the potatoes from the mold.)

Slice the regular and sweet potatoes in uniform slices, about 1/16 to 1/8 inch thick; keep covered with water and pat dry before using.

As you assemble the terrine, press down on the potatoes occasionally to ensure the layers are even.

Layer the terrine as follows: begin with three layers of potato, brushing each layer lightly with melted butter. Drizzle every third layer with 1 tbsp cream and sprinkle evenly with 1½ tsp Parmesan cheese. Add one layer of sweet potato and brush with a thin layer of melted butter, sprinkling evenly with a pinch of kosher salt. (Only the sweet potato layer will be seasoned with salt; you'll need no more than 2 tsp kosher salt in total, for a large terrine.) Repeat the layering until the terrine is filled.

Brush the final layer with 1 tbsp cream and sprinkle with 1½ tsp Parmesan.

Place the terrine on a large foil-lined baking sheet (the cream may spill over) and bake, covered, for one hour. Remove the cover and continue baking for about 30 minutes, or until the potatoes are tender when you've tested them with a knife.

If you don't plan to serve the terrine immediately, leave the potatoes in the mold and cool to room temperature before refrigerating. It lasts up to three days refrigerated.