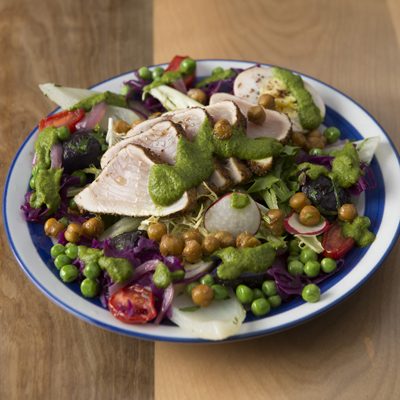 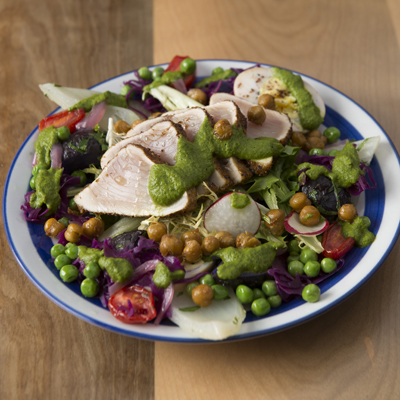 Add salt and coriander to a plate and mix until incorporated. Crust tuna in the spice and salt mixture. Move the tuna to the fridge and let the spice and salt marinate into the flesh for at least one hour. Heat a 10-inch nonstick skillet up with a thin film of oil. Once the oil is almost smoking, add in the tuna and sear very briefly on all sides. Make sure the tuna is still completely raw on the inside. Carve the tuna with a very sharp knife into very thin strips. This can be done well ahead of time.

For the tomatoes:
500 grams halved cherry tomatoes
5 grams salt
10 grams chopped fresh thyme leaves
To prepare the tomatoes, toss the tomatoes with salt and thyme leaves and spread evenly on a baking sheet. Set the oven to the lowest setting, around 100°F, and dry them for about three hours.

Add ingredients to a food processor. Blend until smooth. You will need to add water to get the mixture moving. The finished consistency should be pourable, but still chunky. The capers should provide enough salt, however you may need to add more salt to your taste.

To plate: toss together potatoes, fava beans, tomatoes, lettuce, and cured tomatoes in a large mixing bowl. Season with salt, olive oil and lemon juice. Arrange the salad between four plates. Cut the poached egg in half and season the yolk with salt and pepper. Place one piece of egg on each side of the salad. Lay the sliced tuna across the salad and spoon the cilantro pistou liberally on top.