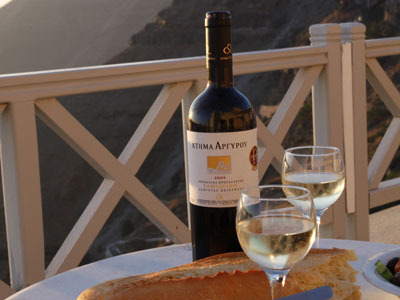 On the island of Santorini, winemaking dates back about 3,500 years. Viticulture here is the oldest in all of Greece and the reflection of its terroir to the glass has vinted some of the country's most popular wines.
Santorini is the most unlikely place to find a thriving wine industry. The island is near baron, except for the green vineyards dotting the view on all sides. The soils range from black volcanic rock to grey pumice sand that is sculpted into terraces cascading down to the sea. All of the vines are trained into a unique basket-like shape to protect the grapes from northern winds so fierce they would effortlessly decimate a normal vineyard.
The climate is for the most part dramatically inhospitable with an annual rainfall of only 6-inches and summer shade temperatures that touch the 90s. The vineyards are not irrigated, instead the vines draw moisture from the porous volcanic rock that drink up the morning dew while the cool north winds prevent the grapes from baking in the hot sun.
Most grape vines wouldn't survive under such harsh conditions, but the white grape varieties of Assyrtiko (90 per cent of the island vineyards are Assyrtiko), Aidani and Athiri are right at home here. These particularly tenacious vines love the hot, dry conditions and have roots that dig themselves deeper than three metres in search of moisture.
It makes sense that Santorini is best known for it's stunningly brilliant white wines that quench a thirst on a hot day and are a perfect partner with light to medium dishes.
On the edge of Fira is Boutari Winery, a modern white domed architectural wonder that sits surrounded by vineyards. Their flagship wine is Santorini Boutari, one of Greece's most popular white wines.
Santorini Boutari is made from a blend of Assyrtiko, Aidani and Athiri. The results are sublime and each sip rewards you with a feminine body of ripe pear layering into white peach and lemon blossom flavours. Its strong backbone of acidity makes it one of the most beautiful wines with the island's traditional dishes, and like many Santorini wines it offers a long finish of grapefruit, wet stone and lime.
There are 13 wineries on the small island from small family owned operations such as Gavalas Wines to the large cooperative, Santo Wines. Santo represents more than 1,000 members (total island population is 12,000) including all of the vineyard owners. The retail outlet is perched on a high point overlooking the centre of the volcano offering up a compelling view of the sea and the caldera.
Inside is one of the largest selections of Santorini wines as well as the famous Santorini tomato products. Santorini tomatoes are known throughout Europe as the sweetest and for having the most flavour. Like the grapes, these little red globes grow without any water and because of the decline of the canning factories, they're now processed at Santo Wines.
One abandoned tomato factory in Exo Gonia has been converted into the impressive modern Gaia Winery. Owner and oenologist Yiannis Paraskevopoulos is credited as being the champion of modern Greek winemaking and his wine Thalassitis is one of Greece's most acclaimed wines. Made from 100 per cent Assyrtiko, the wine is full of island minerals such as stone and chalk laced with ripe fruit and lemon peel.
Paraskevopoulos takes a completely different approach to Assyrtiko, with his Wild Ferment. The grapes come from an upland vineyard in Pyrgos that produces a more robust and aromatic Assyrtiko. The wine is powerful, rich and intense with elements of chalky minerality, grapefruit, lime and integrated nutty oak (rated 94, Wine & Spirits Magazine).
The entire island is moving towards a vineyard organic designation. The harsh conditions are a deterrent to most pests including phylloxera; the sap-sucking louse that decimated vineyards around the world in the late 19th century. However, like many winemakers, Paraskevopoulos likens organic winemaking to “putting angel wings on the devil,” the challenges are just too great.
Santorini boasts the most expensive vineyard land in the world with prices that range from 300,000 to 450,000 Euros ($420,000 to $630,000 CDN) per hectare. Estate Argyros has vineyards throughout the island that total more than 55 hectares (approximately 121 acres) with vines as old as 150 years. They produce 10 wines under two different labels. The Atlantic brand is produced in larger quantities for dependable export, while the Argyros brand is for smaller batches and often times experimental wines.
The barrel cave, carved into the side of a mountain is more than 300 years old. It's here in the cool cellar where the Santorini (made from 100 per cent Assrytiko) ferments and ages in French oak barrels. The wine has a big toasty nose and flavours of ripe apple on the mid-palate that ebb and flow with pineapple, pear, fresh fig and green tea. It's a great example of how rich and lush Assrytiko can be.
Santorini wines are just beginning to make it onto the LCBO shelves, look for wines from better wineries such as Boutari, Sigalas, Gaia, Argyros and Gavalas. In the meantime contact the agents for availability. Santorini is clearly dominating the race to become Greece's best wine producing region.

Lynn Ogryzlo is a food and wine writer and author of Niagara Cooks, a farm to table, and international award-winning cookbook. You can reach Lynn for questions or comments at niagaracooks.ca