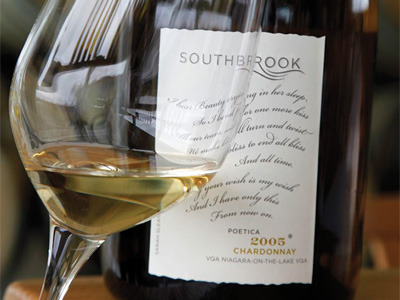 Britain is the epicentre of the wine universe. It's true, they only have a tiny domestic industry, but the worlds most respected and powerful wine writers and publications exist there. When Hugh Johnson, Jancis Robinson and Oz Clark speak, the world listens. Like a restaurant critic, these mighty wine writers have the power to create heroes out of obscurity and command the attention of the vinous masses.

So when 21 Ontario wineries decide to organize a wine tasting of their own at Canada House in Trafalgar Square, London, England, it becomes a big deal. While our local industry has promoted icewine as the signature product from Canada, these wineries have instead decided to showcase cool climate VQA Chardonnay from Ontario.

Chardonnay is the most widely produced VQA wine in Ontario. It offers the greatest variety of styles available to a winemaker, has an appealing personality, is versatile with food, ages well and is offered in a variety of price points. That the best Chardonnays are profound examples of place makes it one of the few truly great wines.

Chardonnay is all about the flavours in the skins, that's why it's often left on the lees. Some of the greatest Champagnes are made entirely from Chardonnay grapes and while Chardonnay grows in many regions throughout the world, it makes the best wines when planted in cool climates.

Chardonnays from Ontario tend to be reminiscent of fine white Burgundies; higher in acidity and lower in alcohol than their warmer climate Californian and Australian counterparts. Generally speaking, cool climate Chardonnays offer elegant crispness accented by notes of citrus over ripe apple layered through hints of vanilla, butter and biscuit.

The lighter weight and freshness of the Ontario versions allow the wines to be paired with more delicate foods.
Chardonnay as a wine established its reputation when it rose to international fame in the 1976 Paris Tasting, when Chateau Montelena's 1973 Chardonnay from the Alexander Valley (California) bested several prestigious white Burgundies.

While besting French white Burgundies is not the ambition of the Canada House tasting, folks from Ontario are hoping for an equally astonishing success. Bill Redelmeier, owner of Southbrook Vineyards in Niagara-on-the-Lake initiated the tasting, saying he came up with the idea for the British media tasting after Niagara's Le Clos Jordanne won a prestigious competition last year in Montreal pitting French wines against wines from the United States.

Le Clos Jordanne's Chardonnay served as the “ringer” in the contest and emerged victorious in the category.

Hearing Le Clos winemaker Thomas Bachelder say in a radio interview that any number of wineries in Ontario could have won the contest, Redelmeier came up with the idea of promoting Ontario Chardonnays as a group effort on an international scale.

British wine writers, Canadian wine journalists and the wine trade will gather at Canada House on May 17 to sample a select group of Chardonnays. The tasting will feature 34 of Ontario's top Chardonnays from 21 wineries, all chosen by a panel of Ontario judges; a panel that reads like the who's who of the Canadian wine world.

Reidelmeier will be opening bottles of his 1998 and 2005 Southbrook Poetica as well as the Southbrook Triomphe Certified Organic 2008. Bachelder will show his 2006 Le Clos Jordanne LCJ Vineyard and 2007 Talon Ridge. Other wineries like Tawse, Lailey Vineyards, Flat Rock, Hidden Bench, Coyotes Run and Henry of Pelham will represent Niagara while Closson Chase, Rosehall Run and Huff Estates will represent Prince Edward County.

Just to add more diversity to Chardonnay, Pilliterri is showing their Chardonnay Icewine. It's sure to please the Brits. You can access the full list of wines to be poured at Ontario House at coolchardonnay.ca.

As I sit here sipping on a glass of Peller Estates Signature Series Chardonnay Sur Lie, I wonder how much longer it will be before Ontario Chardonnay becomes a staple in every self-respecting wine cellar. I have no doubt from the flavours on my palate that they are already world class and right now, they're only available in Canada; I think the Brits would say, pity!

Lynn Ogryzlo is a food and wine writer and author of Niagara Cooks, a farm to table, and international award-winning cookbook. You can reach Lynn for questions or comments at niagaracooks.ca