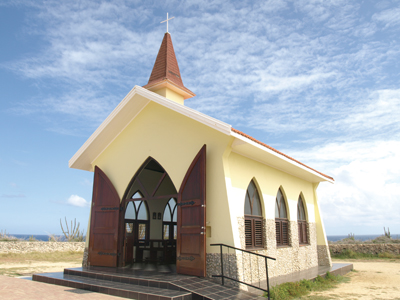 It would take some effort to get lost in Aruba. The odometer barely clicks a few miles and there'd be another coastline on the horizon. Thin and sleek ““ at just 32 kilometres long and 10 kilometres wide ““ Aruba is the A in the “ABC” islands; grouped with Bonaire and Curacao, the trio sits at the western tip of the Caribbean's Lesser Antilles, just a hop off the coast of Venezuela.

Being tucked out of the way has been a tourism blessing. The ABC islands sit far west of the hurricane path and ““ with a low chance of rainfall and a high chance of sunshine ““ are considered a reliable bet for postcard perfect weather. Add in a multicultural mix ““ Aruba is made up of 40 per cent Amerindian, 40 per cent European, 20 per cent African-Caribbean ““ and what blooms is a vibrant mosaic of languages, foods and cultural traditions. Both Dutch and Papiamento have official status as the languages of trade, but most Arubans converse in Papiamento ““ a dialect nicknamed “the people's language” ““ a popular way for those from diverse backgrounds to communicate and understand each other.

Relaxation is big here. With such a small land footprint, the choice of activities is limited, although there's enough to fill several days with culture, shopping and touring. The rest of the time? Grab a page-turner and a fruity drink, snag some shade under a beach umbrella, and feel the stress peel away.

DAY ONE
MORNING: Do. Absolutely. Nothing.
Low-rise resorts line the quiet part of the island along Eagle Beach, a long stretch of white sand and turquoise waters. This is getaway central ““ a tropical address for those who crave downtime, reading, relaxing, swimming and walking the beach. The adults-only Bucuti & Tara Beach Resorts can link guests up to offsite activities like mountain biking, sailing and diving, but the mantra onsite is unscheduled. Bucuti exudes a European flair (the owner was born in Austria but is a long-time resident of Aruba) with a healthy respect for environmental sustainability, cutting-edge technology (guests are given iPads to use during their stay) and a respect for privacy. Beachfront loungers are spaced just a little more so, watercraft that roar are a no-no and finding a private corner of the outdoor bar is as simple as sinking into a curved lounger under a palm tree and waiting for another spectacular sunset.

AFTERNOON: Get moving with an island tour
Small island. Just two cities: the historical Dutch capital city of Oranjestad and smaller San Nicolas. Locals joke that outside of the urban areas, every 10 houses is a new town. Navigating the island routes is not complicated and car rentals are available through any concierge, but those who want to gawk rather than steer can hop onto a luxury 4WD jeep safari tour for an overview of highlights from the pure white beaches to the rugged offroad trails of the national park.

EVENING: Dine at a national monument
Aruba thrives on the influence of European tastes and sensibilities. Settled by the colonial Spanish, who deemed the arid land to be of little use, the Dutch explorers followed, putting down roots and bringing with them a passion for gouda, chocolate and condiments. The new Quinta Del Carmen blends an eclectic mix of dining traditions in a menu with both Caribbean and European pizzazz. Starters like the Caribbean Seafood Soup move to entrees like Shrimp Pií±a Colada ““ shrimp stir-fried with chunks of pineapple and tossed in a warm coconut-pineapple sauce ““ and finish with a traditionally Dutch Stroopwafel Parfait. The best seats at the restored farmhouse ““ cunucu ““ turned restaurant are on the back patio, under a canopy of twinkling white lights stretching from palm tree to palm tree to palm tree.

DAY TWO
MORNING: Wilderness hike
Close to one-fifth of Aruba is protected under the umbrella of Arikok National Park, a habitat of xeric shrub land: desert with very distinct wet and dry seasons. Stone pathways snake past thorny acacia bushes and tall stands of organ pipe cacti (and yes, the park is home to rattlesnakes, cat-eyed snakes and boa constrictors). Mounds of black volcanic rock mark the aftermath of a millennia-old explosion. “The park protects the flora and the fauna, but it also protects ancient rock art,” says national park guide Rodney Yarzagaray. The polychrome ““ red and white ““ Amerindian rock paintings are rare in the Caribbean, making those in Aruba's national park special. The view from the top of a cluster of house-size boulders looks out over both long coastlines. It's a quiet spot on a tranquil island; shared with hummingbirds, mockingbirds and the occasional wild goat.

Not far from the park is Aruba's first Roman Catholic church, the tiny Alto Vista Chapel. Perched on an arid high point above the north shore of the island, the bright yellow church has unbeatable views of both sunrise and sunset. The vista is great, the setting contemplative and, should you want to sit a spell, there's a local vendor out front selling fresh coconut water.

AFTERNOON: Slather on the aloe
Not much grows on Aruba ““ unforgiving desert and all ““ but the aloe vera plant seems to thrive in the arid climate. Aloe grows wild along roadsides and hiking paths but the best way to learn about taking those thick, fleshy leaves and squeezing the gel out is at the Aruba Aloe museum, factory and tour. Row after row of aloe vera plants ““ a.k.a. “lily of the desert” ““ line their its fields. Inside the museum, displays show how the outer leaves are harvested for the precious aloe gel at the centre. Aloe was carried to the New World by Spanish explorers, although its virtues have long been celebrated by Egyptian, Persian, Greek, Italian and Indian civilizations. By the turn of the 20th century small and large aloe plantations were sprouting up across Aruba, covering almost one-third of its landmass. A small shop sells aloe products from shampoos and conditioners to after sun care.

EVENING: Stop the activity and bring on the tropical drinks!
Bucuti's oceanfront Elements restaurant and toes-in-the-sand SandBar blend low key beach life ““ lots of comfy places to settle for a pre-dinner cocktail while catching a front row seat as the sun pops below the horizon and the stars pop out overhead ““ and sophisticated dining with the sound of the waves creating the background soundtrack. Palm trees are wrapped with coils of shimmering white lights and coloured glass accent lamps glow on tabletops. The restaurant aims for the delicate harmony between sophisticated and laidback ““ a  balancing act that's performed flawlessly from the kitchen to the tableside service. Although it's not “of the sea,” the Skirt Steak entrée is top-drawer. Both dinner and lunch menus offer a wide selection of vegetarian, seafood and organic dishes. Romantic dining can be reserved in a private cabana on the beach.

DAY THREE
MORNING: Indulge in a culture hit
In a renovated, historic cunucu building in downtown Oranjestad, the National Archaeological Museum turns on interactive and archival exhibits to tell the rich cultural history of Aruba's Amerindian people. The displays of tools, ceramics and spiritual artifacts are arranged thematically, covering 5,000 years of Amerindian habitation. It's an engaging way to understand the cultural underpinnings of Aruba's harmonious multicultural society.

AFTERNOON: Shopping, shopping, shopping
Downtown Oranjestad has enough duty free and luxury shops to sooth the untamed soul of any shopaholic. A new hop-on/hop-off tram runs along the main street, making the weight of those bags just a little more bearable. Duty free (and no sales tax) goods from Europe are especially attractively priced.

EVENING: Sizzling nightlife
After a few days of decompressing along the low-key, low-rise stretch of Eagle Beach, some might feel a yearning for a little party scene. A little further to the north, the Palm Beach high-rise area is home to watercraft rentals, shopping malls, karaoke bars, trendy eateries and casinos. As the sun goes down, the nightspots crank up the action with everything from fireworks to vibrant salsa and merengue beats.

If you go
Aruba is served by direct flights by Air Canada; American Airlines via Miami.

The island is divided into two very different hotel regions: the low-rise resorts on quiet Eagle Beach and the high energy, high-rise developments on Palm Beach.