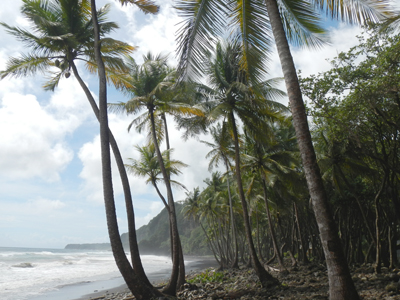 There are worse places to be stranded than on a Caribbean island. Not Robinson Crusoe-type stranded. Rather, the type of schedule hiccup that happens when a tropical storm rumbles through. It begins with some local chatter about the possibility of big weather moving in. The wind slowly picks up and soon every television in every bar and lobby is locked onto the weather station. Skies darken, gusts  intensify and the lanky coconut palms whip back and forth. Then the rain begins. And oh, how it can pour.

When Mother Nature reveals her tempestuous side on a small island like Dominica, there is no choice but to stay put. The airport is bantamweight, with just one runway ““ a rather short one at that ““ not long enough to service jets, so everything that lands is powered by propeller. Dominica is so impossibly hilly that from above it looks like backhoes carved a swath out of the rolling green in order to create enough flat space for a runway.

This sort of remoteness, this undiscovered quality, is what plays havoc with my travel schedule, but it's also what makes Dominica so alluring. Relatively untouched by mass tourism, it's known as The Nature Island. The jungle-like tropical forests are so thick they create the backdrop for films like Pirates of the Caribbean. Eco-enthusiasts come to tackle the island's hiking trails, snorkel in secluded coves and soak in the hot springs. There are no high-rise developments, no chain resorts and not even a whiff of a casino. Dominica is the way we picture the old Caribbean, before development grabs hold and creates change.

Moments after pulling away from Melville Hall Airport, my taxi whizzes along a twisty roadway lined by small squares of rich earth planted with crops like bananas, and long stretches of jungle green, stands of bamboo and tall coconut palms. There's a roadside supermarket splayed out before me: bananas, cinnamon, dasheen, cocoa, mangoes and lemongrass. Agriculture is number one here, even trumping tourism. At one time the island relied so much on bananas that locals nicknamed them “green gold.” Snaking along the east coastline, my driver touches the brakes and weaves around the occasional goat or brood of chickens. “Small roads. High speeds,” he surmises, as the windshield wipers slap back and forth, portents of the downpour that's approaching. I hold tight to my armrest.

When Beverley Deikel arrived on Dominica, she saw potential. “I fell in love with the nature of the island and the nature of the people,” explains the ex-pat entrepreneur who transformed an overgrown coconut plantation into the Rosalie Bay Resort, an award-winning eco-boutique getaway. “We're not pretentious. That's not us and it's not Dominica.”

Built where the Rosalie River spills into the Caribbean Sea (it's one of the island's 365-plus streams) the property was built from the ground up with a sustainability ethos. The furniture ““ from four-poster beds to porch swings ““ are made locally from red cedar. A large windmill cranks out electricity. Dozens of solar panels feed power into the grid and heat water for domestic use. And it's all tucked along a beach of dark, volcanic sand; a lush property filled with almond and mango trees as well as the island's trademark coconut palms. Dominica has more palms than any other island I have visited.

There's a sweetness and an authenticity to Rosalie Bay and I cannot help but think that it wears its heart on its sleeve: a genuine commitment to sustainability, to creating local jobs, to serving healthy foods created with local ingredients, to the sense of joy and calmness that envelopes the property.

As night falls and the tree frogs let loose with their earnest chirping, things rapidly sink into real darkness. There's a short break in the gathering clouds and I can spot the Pleiades overhead. We stumble along the rough, oceanfront pathway behind the single bobbing flashlight beam held by Simon George, coordinator of Rosalie Bay's sea turtle conservation program. The program is so popular that guests regularly ask to be roused in the middle of the night should hatchlings be spotted making for the sea.

“The season starts in March with the leatherbacks,” Simon shouts above the crashing waves. “Community groups monitor beaches around the island and report turtle activities. The greens and hawksbill turtles follow soon after and between laying and hatching the season stretches well into October. If all goes well, a nesting can take several hours and after that it is the end of the turtle's parental responsibility. The hatchlings are on their own. And that's if all goes well.”

The celestial cluster brings us a stroke of luck. We may be too late for the actual moment of hatching ““ we count the remains of six-dozen hatched eggs ““ but there are two tiny turtles still struggling to escape the nest's sandy depression. We give them a little boost, setting them on the black sand. Each seems programmed to know its mission and they scamper toward the waves. Simon explains how it is important to let them make the trek from sand to water. “It's part of the imprinting process. Even if we need to provide some help, we make sure they crawl along the sand to the ocean.”

The island-wide program ““ spearheaded by Rosalie Bay more than a decade ago ““ protects nesting turtles and the nesting habitat, cares for the eggs, even relocating a nest if it is too close to the ocean, and watches for signs of hatching, doing whatever is needed to help create a safe transition to the saltwater. The turtle tours are a very popular part of the Rosalie Bay experience.

The next day I don a rainjacket and head for a half-day hike along a coastline segment of the Waitukubuli National Trail. I quickly learn why Dominica gained the moniker, “The Nature Island”: almost two-thirds remains untouched, blanketed with dense mountain rainforest. There are three large national parks and two protected forest reserves, crisscrossed by 500 kilometres of hiking trails. Much of it is virgin wilderness, so guides are recommended. Trails lead to waterfalls, along oceanside cliffs and into the island's interior, to the world's second largest boiling lake. It would take weeks and a Herculean effort to hike them all.

Our route is wet and slippery, cassava and tall stands of thin lemongrass crowd the pathway. My guide, Derick, is surefooted on the glistening mix of red mud and wet leaves. This segment of the National Trail is significant because it passes through the communities of the Kalinago, the name given to the indigenous people ““ formerly known as the Caribs ““ who were the first inhabitants on Dominica before the arrival of the Europeans.

“During colonization our people were driven into the interior,” Derick explains. “In 1903 the territory along the east coast was set aside for the Kalinago. Here we have our villages, we plant small patches of yams, potatoes and cassava. We protect our traditions.”

We stop for lunch at the small interpretive centre where a hut is filled with displays showing traditional life in pre-Columbian times. Three women sit under a thatched roof, chatting as they weave baskets from larouma reeds. The long green reeds are collected from the forest, washed, dried to brown and then soaked in mud for five days to dye them black. Then the weaving process begins ““ it takes two full days of work to create a basket the size of a bread loaf. It is a creative tradition of great pride.

In the morning I open my shutters to a different Dominica. The tropical storm has blown through, the clouds have parted and the sky is an azure blue so clear it almost hurts to look. I have mixed feelings. The break in the weather means flights will be back on schedule. Rain and sun, Dominica has seduced me with her charms. I know the time to leave has arrived, but I can think of nowhere else I would rather be stranded.

If you go
Like many things worthwhile, getting to Dominica requires some extra effort with no direct flights from North America. Connecting flights are through Antigua, Barbados, St. Maarten, Puerto Rico, Guadeloupe and Martinique. Airlines include LIAT, BVI Airways, Seaborne Airlines and Winair.