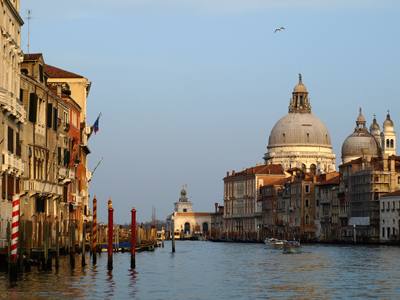 There's a pleasing ritual that happens when travelling by European train. It begins with a stance at the base of the station's enormous electronic timetable, gazing upward with a look of awe that will be repeated many times through the trip: at Notre Dame Cathedral in Paris, San Marco Basilica in Venice and the Colosseum in Rome. But in a train station, this neck craning is a different kind of cultural worship. For me, this is the way the voyage must begin.

If I could rewrite my own history, I would be born in a railcar; brought into this world, perhaps, at the moment crossing borders from one country to another (how cool would that be), then rocked to sleep in the giant bassinet on steel rails. It's a contemplative grasp at feeding what my husband delicately calls my “Europhile leanings.” Any train, any city, any schedule and I am on board, if not physically, then spiritually. Europe by rail is my illicit love affair.

For such a love affair, there is no better spot to begin than Paris, the City of Love.

Paris is filled with architectural treasures, including icons of the 18th and 19th centuries, a time when moneyed North Americans embarked on a Grand Tour, travelling by rail between Europe's cultural capitals, purchasing furnishings, fabrics, art and décor by the crate load. It is home to some of the world's greatest galleries, building triumphs and most refined shops.

On the ground in front of Notre Dame Cathedral ““ a symbol of Paris ““ is a large, round marker, sunk into the surrounding concrete plaza. It is France's mile zero, the point at which all mileage is measured radiating outwards from this very spot. More proof, the French like to point out, of all that exudes from this grand city. The towering Gothic church is a natural starting point for any exploration of Paris ““ its commanding location is on the íŽle de la Cité, a small island in the centre of the River Seine, the ribbon of water that made the city. In medieval times, the Seine was a conduit for trade ““ wine, lumber, trading goods were floated up and down the river. A small community grew into a market stop and eventually into one of the world's great capitals.

For Terrance Gelenter, an ex-pat guide to the city, everything in Paris begins with the café. It is the centre of daily life in Paris, with its roots back in the early 1800s. “It is an integral part of the way we live,” he explains, sipping an espresso in a Saint Germain café. “And when it comes to cafés, we stress fidelity. Here we sit over a cup of coffee, have a conversation, do some reading. We learn to relax and move at a certain speed.”

A smile and a bonjour open doors to conversations with Parisians. “We're less involved in transaction here than in the experience. Look around you at the uniformity of the skyline. There's a beauty, a symmetry and a tranquillity to the way the city has been laid out.”

Later, I walk a route connecting the city's architectural landmarks: from the Place des Vosges in the chic Right Bank Marais district, to the Pont Neuf where lovers clamp locks to the city's oldest bridge in a quest to mark their passion immortal, the Louvre, the Arc de Triomphe and finishing at that most Parisian of the city's symbols, the Eiffel Tower.

With a bit of Parisian neck craning, my own Grand Tour begins to take shape. Onward to Italy.

Sweeping her gaze around Piazza San Marco, Venetian-born guide Daniela Cominotto is giving me a visual tour of her home city. Pointing to San Marco Basilica, a glass, marble and gold masterpiece, she rolls off a list of architectural styles: “Byzantine, Gothic, First and Second Renaissance, Baroque. You are in one spot and you see the evolution of style in Venice. It's absolutely gorgeous.”

The oldest part of Venice is like an island in the middle of a lagoon; a village founded by poor fishermen that became an epic crossroads of trade. “The most important of our merchants was Marco Polo ““ during the 13th century he exported goods to the rest of Europe. There was a monopoly of trade, until the discovery of America changed trade around the world and the ocean became more important than the Mediterranean Sea.”

In modern times Venice has attracted a new sort of trade: the tourist. Best avoided in the busy summer season, the city shines in the spring and fall, ideally explored using the method of getting lost.

“When you cross a bridge you go from one island to another,” says Cominotto. “In Venice there are 118 islands separated by about 100 canals, connected by 417 bridges. It is an open-air museum. Get lost in town.”

This turns out to be the best advice of all. The tiny printing on the city map involves much squinting. The laneways of the car-free, old city centre twist and turn with no apparent logic. I ask locals for directions. “Just a bit further ahead,” they say, waving. But it never is.

Abandoning the map, I drift into a world of gondolas bobbing in saltwater canals, Turkish-influenced architecture captured by the distinct points atop narrow Byzantine arches, small shops where the smell of leather wafts from the doorway, gelato stands and pastry shops with windows stacked with treats like pinoli and tiramisu. Venice is a place to teeter on sensory overload, a stepping-stone to prepare for Rome.

There is much made of driving in Rome, but I have decided that this city is home to the continent's best. It's a nonstop cacophony of horns honking, screaming from car windows and boorish gesturing, but an Italian driver can shoehorn any car into an impossible space ““ while in motion or parking ““ with the agility of a gazelle.

The old city core ““ most of it not less than four centuries old ““ was never designed for modern traffic. “It's an enclosed city of buildings and little alleyways,” explains Stuart Harvey, a professional guide with an encyclopaedic knowledge of all-things Italian.

Rome is best appreciated as an exquisite arc of time, with a window into both the ancient and modern worlds. Around every corner is a treasure: clues to the village of seven hills that began as a trading post in the middle of the River Tiber; the era of the ancient Roman Empire, when titans like Nero, Augustus and Hadrian ruled; the rise of Christianity as the power of the church rolled over, and obliterated, the pagan Roman Empire,  building churches on the foundations of Roman temples, sometimes simply removing statues of Roman gods and replacing them with Christian statues.

It would take Harvey weeks, perhaps months, to explore and explain this timeline of ancient to modern history. But with only an afternoon to cram in a crash course, the Pantheon is a logical place to begin.

“This is the only place you can come to see the original decorations from Roman times. Across most of the city, the pope, the cardinals and the aristocracy destroyed almost all of pagan Rome,” he says as we stand on the steps of the ancient temple-turned-church.

“Decoration-wise, this is what ancient Rome looked like. The word pantheon means “˜all the gods' and in Roman times this was a temple dedicated to the entire pagan religion. What makes this building so important is that it is intact. And it's intact because it was changed into a Christian church in 609 A.D. and has remained a church for 14 centuries.”

In a city of extraordinary architecture ““ consider St. Peter's Basilica, the Colosseum, the Roman Forum and thousands of other sites ““ Harvey calls the flawlessly proportioned Pantheon “genius engineering and the most important building in Rome.” The dome is a perfect hemisphere and daylight streams in from the oculus above, splashing the marble floor with   a beam of sun. From the enormous columns towering outside, to the modest interior sarcophagus of the artist Raphael (together with Michelangelo and da Vinci considered the most important artists of the time), the Pantheon is a diary of the city's history.

It was under the rule of Emperor Constantine that Rome underwent an earth-shattering shift in 313 A.D. “He made Christianity legal. So, after 250 years of on and off persecution of this strange, unusual monotheistic religion, Constantine makes Christianity legal and Christians can build churches.”

This intersection of history and architecture makes Rome such an enticing sell. Underneath Christian churches and buildings everywhere, archaeological digs have uncovered the ruins of Roman-era temples and homes. Simply strolling the core of the old city criss-crosses these history-soaked sites: the unearthed ruins at Largo Argentina, where Julius Caesar was assassinated on the Ides of March; the remains of the old stadium at the atmospheric, cobblestone Piazza Narvona; the Basilica St. Clemente where 2,000 years of history are on display. There are too many to list.

As with all great cities, there is never enough time. My Europhile senses are tingling. The rails will bring me back again.

If you go
Eurail Group
eurailgroup.org
North American travellers must purchase their rail passes before arriving in Europe. The new Rail Planner is a free and convenient app that provides offline access to the European train timetables.