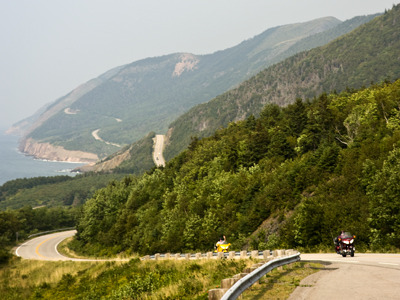 It's been a quarter of a century since I last walked the wharves lining the Halifax waterfront and I was knocked out by the stunning makeover the city has given itself since then.

What struck me most was the fact that the city managed to maintain such a strong maritime feel while going completely uptown. Along with the occasional navy ship heading toward its home base in Bedford Basin the waterfront is crowded with good restaurants, harbour cruises and a ton of interesting museums and markets.

The latest addition to the harbour region is the new Seaport Farmers' Market. The Halifax Farmers' Market is regarded as the oldest in North America opening shortly after the city's founding in the 18th century.

Along with fresh produce and seafood, the new building, located on Lower Water Street, is the country's greenest in more ways than simply offering an abundance of broccoli and asparagus. Spectacular solar atriums, photovoltaic cells and mini-wind turbines power the building keeping vendors and shoppers happy and comfortable. There is also a totally green roof planted with grasses and other vegetation and a living wall on the inside to provide natural insulation and help replenish oxygen.

The Seaport Farmers' Market is also one of the places to go to try out the product of the budding Nova Scotia wine industry. Vintners like Jost, Annapolis Highland and Blomidon Estate all have kiosks set up in the market.

A short walk along the wharf from the market takes you to two museums that educate you about the soul of Halifax.

Adorned in its wartime dazzle paint, the corvette H.M.C.S. Sackville is tied to the dock enjoying a well-deserved old age. The ship is the last of the Canadian corvettes that offered protection to the lifeline of convoys carrying supplies and munitions during WW II.

H.M.C.S. Sackville is open to the public every day and with canons, depth charges and machine guns is the kind of living museum that is a hit with veterans and kids.

The other museum is the Marine Museum of the Atlantic. The centerpiece of this museum is the C.S.S. Acadia. This Canadian survey ship measured the country's northern waters from 1913 until she was decommissioned in 1969.

Her lines are very elegant making it easy for this beautiful ship to overshadow the other exhibits in the museum. Moored beside the Acadia are several smaller wooden boats. Some of these are racing/cruising yachts donated to the museum by local amateur sailors while others like the yawl MMA were built by the museum's own shipwrights.

For anyone interested in messing around in boats, the Marine Museum of the Atlantic is a great half-day adventure. It contains some very fine examples of working fishing boats that were built up and down the coast from Sydney to Yarmouth. There is also a curious chunk of steel that was found after the Halifax explosion.

Being one of the world's great harbours, Halifax has a long history of shipwrecks and disasters. The most famous of these is not usually associated with Halifax because it happened nearly 600 miles northeast of the city.

When the R.M.S. Titanic hit an iceberg and sank in 1912 the closest land-based rescuers were in Halifax. Searchers returned with 209 victims. One hundred and fifty unclaimed bodies are buried in three cemeteries around the city and are a popular, although macabre, tourist attraction.

The easiest way to get to the Titanic graves is to hop a Greyline Tour bus at the harbour near the foot of Prince Street. The driver, a kilted raconteur named Ian, provided a splendid commentary on everything from the explosion to the eerie coincidences surrounding the bodies of the Titanic victims.

But Nova Scotia is more than cosmopolitan Halifax. There are dozens of small fishing villages lining the Atlantic and Fundy shores.

Peggy's Cove and Lunenberg are probably the easiest to visit. With a rented car, they are an hour's drive down the Eastern Shore.

Lunenberg is famed as a fishing port and homeport to the Bluenose. The town, which once sought to rival Halifax, is terminally cute. Like Halifax, it has successfully made the transition from fishing port to international tourist destination and UNESCO World Heritage Site.

History envelops you in Lunenberg. Homes like the Kaulbach House, now an historic inn, line the gentle streets and squares.
We booked into another historic inn, the Mariner King's Inn.

Built around 1830 as a home for one of the town's successful ship captains, the Inn has been beautifully restored without losing the essence of its original comfort. It's a small inn concentrating on quality and service so rooms are limited. What isn't limited is the friendliness of the staff and the excellent food prepared by Chef Konrad Haumering.

Before setting out for the day, we stopped in the dining room to have breakfast. The menu is created by Chef Haumering to make use of as much of the local produce as possible. Not many visitors know that Nova Scotia is a major farming as well as a fishing province.

I almost asked to move in when I sat down to breakfast. Placed on the table before me was the most exquisite Eggs Benedict I have ever eaten. Waving at me from the Hollandaise was the tip of a fresh lobster claw.

Our first stop were the wharves along Lunenberg Harbour. The brilliant scarlet Adams and Knickle Ltd. (pronounced Ke-nickel) store and warehouses mark the exit from the tourist world and entrance to the maritime.

Fishing trawlers still tie up here and Canadian single-handed sailboat racer, Derek Hatfield used the harbour as a base while preparing for the current around-the-world-alone race.

This is where Capt. Angus Walters also raced a sailboat from. In 1921, just a few hundred metres up the shore from the Adams and Knickle shops, a deep blue schooner slid down the weighs of the Smith and Rhuland shipyard. Bluenose went on to beat every contender the American fishing fleet could offer for the International Fisherman's Trophy and was so renowned she still graces the back of the Canadian dime.

Tied up to the wharf is another schooner ““ the Theresa E. Connor. Although no longer a sea-faring ship, the Connor is an example of a “salt banker” or ship that fished the Grand Banks. She is one of the vessels belonging to the Fisheries Museum of the Atlantic.

The Fisheries Museum is one of those places to take the kids and become a kid yourself. Besides their collection of ships, the display hall is full of interesting things to see, touch and do ““ like launching a model schooner or visiting the wheelhouse of a trawler to talk to an actual fishing captain.

Renting a car in Nova Scotia if you didn't drive your own is a great idea, especially if you want to roam further afield to the Fundy shore or Cape Breton.

Cape Breton is a world of its own and worth the time to visit.

We began to feel the Scots influence as soon as we crossed the Canso Causeway.  But before we opened the haggis sandwiches, we took a side trip to Isle Madame to visit another culture you don't hear as much about.

Cape Breton is Evangeline country. Before the arrival of the Scots, the French Acadians had a vibrant culture and many place names along the Southeastern shore ““ Grandique, Grand Anse, D'Escousse ““ reflect this.

The Acadians were the original European settlers in the Maritimes. Distinctly different the Quebecois, Acadians still consider themselves a separate culture.

In the mid-1750s many Acadians were rounded up by the British and deported to Louisiana where their name and culture gradually evolved and they became the Cajuns.

The Louisbourg National Historic Site near the northeast tip of the island is one of the best uses of taxpayer dollars that I've seen in a long time. Louisbourg is a reconstruction of the French fortress built to guard the new colony and to protect the French cod concession.

Not many central and western Canadians understand it wasn't the fur trade that was so economically important, but the cod fishery. It provided large chunks of cash to the French king.

Parking in one of the big lots servicing the site we boarded the bus that carries tourists out to the fort. Once at its gates, two 17th century French Marines ““ Linda Kennedy and her fellow historic re-enactor Nancy Richard, challenged us at musket point.

The pair is part of the garrison of re-enactors ranging from bakers and kids, to musicians and soldiers. Louisbourg is living history.

Louisbourg was first settled in 1713 and was built up over the next 45 years. Then in 1758 British forces captured it, finally blowing it up in 1760.

All that remained was rubble and foundations. In the 1960s, the government decided to restore the town and battlements, and today there are more than 25 buildings completely restored.

With demonstrations, tours and exhibits plan to spend a day in Louisbourg alone. Wear good walking shoes and bring a fleece and umbrella because the weather can turn quickly. There are restaurants, bakeries and a coffee shop onsite.

By day's end we were tired and hungry. All the way up the island we had been seeing signs for lobster suppers and this was the day we decided to go for it. We pulled in at the Beggar's Feast in the town of Louisbourg proper (just outside the Fortress). We were expecting a meal, but got an entire show with costumes to wear, music, dancing wenches and of course fresh lobster.

For four more days we meandered around the island wandering from the Acadian shore to the Gulf of St. Lawrence where the road swoops and soars up and down a thousand metres along the Cabot Trail. You could spend a profitable lifetime getting to know this one little piece of the world intimately.

Scottish tradition says life is nothing without “uisge ban” (Gaelic for waters of life) and the Glenora Inn & Distillery was our final overnight on the island.

The distillery is the only single malt whisky distillery (note whisky spelled in the Scots manner without the “e”) in North America and a must for connoisseurs. Even more delightful, you can do your sampling after you've finished driving. The Inn has its own pub and musical entertainment for the evening ahead of you.

Marine Museum of the Atlantic
museum.gov.ns.ca/mmanew

Fisheries Museum of the Atlantic
museum.gov.ns.ca/fma