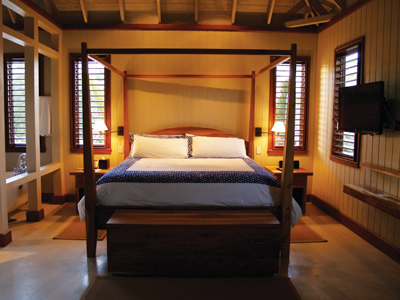 Three miles an hour. That's the speed my inner tube is being pulled along by a lazy current, interspersed by the occasional flurry of small rapids. And there aren't even a lot of those on Jamaica's White River ““ just enough to elevate my heart rate from lackadaisical to chilled out.

This ““ my chatty guide Ovan tells me ““ “is the real Jamaica,” high into the hills above Ocho Rios and its boom of tourism. From the exclusive resort of GoldenEye (built by 007 creator Ian Fleming) our jeep follows corkscrew turns along a narrow ribbon of asphalt. I don't see one road sign that tells me where we are; just the enormous leaves of the banana plants lining the single lane route. At the upper reaches of the river we stop by the 17th century Old Spanish Bridge, the starting point for our float. Inflated inner tubes bob by the shoreline, struggling in the current to launch a Michelin Man getaway.

With a flash of a smile, Ovan unties the ropes and we push off. At the first bend in the river, my inner tube gets caught in the twist of a slow eddy. For a moment I wonder if I am destined to see the same stand of royal palms over and over and over again.

Its name aside, the White River is a place of colour: the intense blue of the water (it's due to high limestone content) and the lush greenery of banana plants, almond and mango trees, punctu- ated by spikes of red and pink ginger. There are stands of giant bamboo, stretching 10 storeys toward the sky. I'm told that young bamboo grows up to a metre a day. “This forest is a very special place,” says Ovan, pointing out the orange flowers of the African tulip tree. “We call this the flame of the forest. From the air, when it is blooming, it would look like the forest is on fire.”

It was this Jamaica ““ the real Jamaica ““ that hooked Commander Ian Fleming when he visited in the early 1940s and fell in love with a piece of overgrown land that was once a donkey racetrack. The author built his minimalist-style home on the piece of beachfront and penned all 14 James Bond novels while living at the villa GoldenEye, named after a Second World War secret mission. The tropical birds, the scent of the flowers and the tug of nature may have spoken to Fleming's soul, but they were a distraction when it came to creating the suave and skilled Agent 007. He wrote with the shutters of the huge windows closed and his desk pushed against the bare wall so the outdoors would not divert him from the task before him.

After Fleming's death, the property changed hands and was bought in a serendipitous twist by Chris Blackwell, founder of the highly successful Island Records and the music producer responsible for introducing the world to the sounds of Bob Marley, Traffic, Cat Stevens and U2.

“In 1976 I talked Bob Marley, to whom I'd just paid $70,000 in royalties, into buying GoldenEye,” Blackwell recounts. “But then he got cold feet, said it was too posh. So the next year, when I was flush again, I bought it myself. The original For Sale document said Bob Marley and we crossed that out and wrote in Chris Blackwell.”

Blackwell wanted to create an exclusive resort where guests would feel they were visiting the home of a good friend. He added three well-spaced villas along the waterfront (the secluded five-bedroom main house is still the heart and soul of the property) with winding pathways and tall shrubbery to create a sense of privacy. Another 17 luxury waterside villas and cottages and a beachfront bistro were added in a 2010 expansion.

A trinity of seasonings
As dusk falls, staff appear to light the candles and torches lining the walkways and the villa patios. I sit on the dock of my cottage and dangle my feet in the warm water. The nighttime chirping of the tiny Caribbean tree frogs starts ““ an announce- ment of the dinner hour. I reluctantly pull my feet from the water, towel off and head for The Gazebo, the treehouse-style restaurant perched on a cliff overlooking a crescent of sand beach and a turquoise sea.

“People used to come to Jamaica and only try curried goat or jerk chicken,” says Conroy Arnold, GoldenEye's “born “˜n' bred” Jamaican chef who learned to cook at his grandmother's apron strings (and expanded that training stateside at the Culinary Institute of America). “I'm trying to introduce some new flavours to the menu.”

Chef unapologetically embraces the island's Scotch bonnet pepper, one leg of the seasoning trinity of Jamaican cuisine (the other two being scallion and thyme). “I'm trying to keep it traditional while introducing some new, fresh flavours. It's all about finding a balance.”

Arnold knows his way around chiles. Everywhere on the menu is a hint of the fiery pepper, without it being overpowering. There's a pulled-from-the-sea-fresh ceviche with the sparkle of lime and a slight burn of the pepper oil. A dinner plate of sweet, white, pan-seared parrotfish drizzled with a Scotch bonnet-infused sauce. For dessert, warm bread pudding and a scoop of coconut sorbet (no peppers here). His kitchen is supplied daily with fruits and vegetables from the resort's own farm fields; local fisherman bring their daily catch for the chef's inspection. Chef is a stickler for freshness.
At the home of a friend
I fall asleep to the sounds of the tree frogs, the swoosh of water lapping the shore and the sooth- ing breath of a tropical breeze. My shutters are open to let in Blackwell's ethos: staying in harmony with nature and always appreciating the beauty surrounding the property. It has a calming effect on my psyche.

The next morning there's a soft tap at my door. A carafe of Blue Mountain coffee is delivered to my cottage. I can start my day slowly, soaking it all up: the stunning beauty of this remote sea of calm, white tablecloths fluttering in the breeze, perhaps a rejuvenating massage scented with coconut oil, pimento and ginger. There's a cadence here that causes people to slow down.

I pour myself a steaming mug, relax and take in the view, soaking up the mojo of GoldenEye. This secluded spot isn't a place to escape the world; it's a place to embrace it.

If you go
Air Canada (aircanada.com) and WestJet (westjet. com) offer flights from Toronto to Montego Bay. It's a 90-minute drive east to GoldenEye at Oracabessa. Helicopters from Montego Bay (25 minutes) land at the property's helipad. Private and charter airplanes can land at the new Ian Fleming International Airport, just minutes from the resort's front gates.