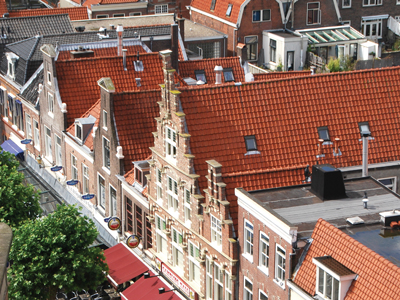 Sometimes the best way to experience a country is to take advice from someone who lives there. Preferably someone who grew up there and has all the insider knowledge of a tour agent, but steers you away from run-of-the-mill tourist traps. Sometimes you have to listen to that person and trust that the bus they tell you take from the airport is the right one, even if it's going away from where everyone else is headed. Sometimes the risk is worth it.

This is precisely how I ended up spending a delightful three-day diversion in Haarlem, Holland. I veered off the road more travelled on my way to Amsterdam and didn't regret the detour for a minute. And it's not a big detour.

About a 20-minute train ride from Amsterdam, Haarlem is the town many of Amsterdam's workers, employee and professional people call home, making it an interesting, easy to navigate suburb of its larger, busier cousin.

The best way to get to know this close relative is aboard a Haarlem Canal tour run by Jeroen Hagen. Like Amsterdam, Haarlem canals dominate the town. A tour with Hagen feels like a day on the water with an acquaintance you've known for years, and it doesn't hurt he has the striking good looks of a Hollywood actor, combined with the welcoming charm of a hospitality veteran.

Unlike some of the touristy boats that load people in, give you electronic translators to listen to a pre-recorded tour (effective but generic), Hagen tailors his tours to his audience, welcoming riders to the boat he is clearly proud to own. He specializes in small groups, and tour and lunch combinations (soup and sandwich at a local café before the ride). The day I cruise, he volleys between English and Dutch, exchanging stories with guests, including some locals wanting to spend a relaxing afternoon on the canal.

Travelling to Amsterdam is like going to a party where no one knows you. Travelling to Haarlem  is like visiting a friend who shows you a night on the town.

Haarlem is Amsterdam light, all of the charm of a canal town built on the affluence of 17th century trade and prosperity and none of the trappings of a tourist town surging with people, tram bells and red lights. Its compact old town area, radiating from a central church and Grote Market courtyard, has been hosting merchants for centuries.

The courtyard is an easy starting point. The Gothic Grote Kerk Protestant church is central to the market, but it's important for more than navigational reasons: inside is a historically significant organ and pride of the city. Built by Christian Muller in the 1700s, when completed it was the largest organ in the world with 32 feet-high pedal towers. In 1766, it was touched by the hands of a 10-year-old Mozart, and is still played today.

Despite the cobblestone streets, the remarkable lack of traffic (other than bikes), and the towering pre-Victorian canal homes built during a century when the waterways were the primary source of transportation and beermakers were the richest men in town, Haarlem today has just the right amount of contemporary trappings. Boutiques dot city streets and street cafés are filled with people ordering pizza, sushi, fries and anything not uniquely Dutch. Among the centuries old architecture, a couple of boutique hotels, like the Amrath Grand Hotel Frans Hals, keep the city European current.

This hotel is easy walking distance to the Grote Market. Every day, fleamarket-like vendors set up tents and tables fulled with imported bead jewelery, cotton scarves, buttons and sewing notions and flowers in the shadow of the Grote Kerk, only to tear them all down six hours later.

The church bell rings on the hour, and gaggles of commutors head to the train station daily. None of this seems to interfere with the streets and streets of shopping: Asian home décor items, eco shoes, trendy skaterwear, endless boutiques of dresses, shirts, and narrow leg jeans. Hip residents walk, or more likely peddle, by café patrons wearing narrow pants and short or high boots ““ always boots ““ summer, fall or winter.

Shopping is clearly the vice of choice here. Don't start early, though. Most shops don't open until noon or even 1 pm so you have plenty of time for a leisurely café visit. There's a tiny red-light district tucked out of view a block behind the church, lit with a glowing ruby light or two, and a couple of discrete coffee shops with wafting smoke, but nothing distracting from the charms of old town.

However, if you're here for more than people watching and getting your shopping fix (prices are generally better than in Amsterdam), there are two museums on the must-visit list: The Teylers Museum and the Fras Hals Museum. Neither takes an entire afternoon to enjoy.

The curious Teylers Museum, the oldest in the Netherlands, is a point of pride for the 150,000 residents of Haarlem, primarily because it's been a landmark along the waterfront ““ in the same building outside and wood paneled display cases inside ““ for 225 years. Opened in 1784 and dedicated to scientific artifacts, it's named after an 18th century merchant who willed his entire fortune (vast for the time) to the “advancement of art and science.” Hence the eclectic collection of older inventions, tools, minerals, fossils (significant because only in the 18th century did we accept the idea that now extinct fauna once existed), medical and scientific instruments and art ““ including 12 prized Raphael drawings from the early 14th century.

The Frans Hals museum celebrates the art of the country's favourite son in a house with residential rooms hung with paintings, rather than stark galleries. You walk from room to room in this museum, as though taking a tour
through an art collector's home, and everyone stops at the dollhouse exhibit representing a trendy upper-class hobby of the time.

I wouldn't suggest Haarlem is an alternative to Amsterdam, unless you've done Amsterdam to death. However, it is an ideal warm up and charming alternative for a day or two prior to the big visit. Get your shopping done easily here before gearing up for Amsterdam's many, many museums, gardens and even downtown zoo, and dodging bikes, traffic and throngs of certain tourists Haarlem doesn't seem to attract.

While Amsterdam is exciting and titillating, Haarlem is hip but demur, existing as much for the pleasure of residents as visitors, though the latter are encouraged especially if you book a canal tour with lunch.

If you go
General infornation for visitors:
visithaarlem.org