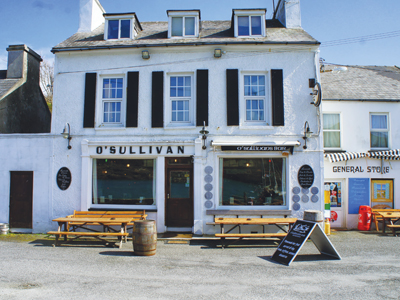 I have become a believer in the luck of the Irish.

On a recent tour of the southwest of that green island, I lost a 20 euro bill, and found it stuck inside my touring map. A random choice of pubs for lunch in Glengarriff resulted in the best seafood chowder  I have ever enjoyed, and, against all odds, I snapped a photo of an Irish castle that will forever be my tangible memory of Ireland.

I had been trying to get a good photograph of historic Dromoland Castle but every time I reached for my camera, the sun disappeared and it would begin to rain. Not rain exactly, more like a light mist, what the Irish call “˜soft' weather.

So I had little hope as I headed out in the fog to tour the grounds. An hour later, returning to the castle via a curving path that wound around the famous golf course on the property, I emerged from the trees at the exact moment that the sky cleared and the sun lit up the castle. The light lasted only long enough for me to take a few pictures, before the clouds descended again.  I felt I had been in the right place at the right moment ““ Irish luck.

Even in the mist, Dromoland Castle Hotel is dramatic. This five star property is a short 12-kilometres from Shannon Airport and the perfect place to unwind after a long flight.  It's also an ideal starting point for a driving tour of the southwest of Ireland.

Driving the Irish roads is less intimidating than it used to be ““ many roads have been widened, and there are modern multi-lane highways that can get you where you want to go quickly and easily.

But in Ireland, getting there is not the point, and the Ireland you want to experience won't be found along the freeways. You need to take the winding roads that lead you along the coastline, through the mountains, and into the villages where pubs lure you into stopping for a pint or two and lush gardens seduce you into long walks.

On a drive along the Irish coast from Shannon to Cork City, I followed the quieter roads.  With minimal planning and some Irish luck, these roads took me to seaside towns that each possessed a character and a story.

Knightstown, on Valentia Island, partway along the Ring of Kerry, is a tidy little village that borders the harbour. This is a summer holiday place, with water sports, fishing and boating. It is best known as the place where the Transatlantic Cable was completed.

You can take the ferry from Knightstown to the Skellig Islands, with Skellig Michael being particularly interesting. Rocky and forbidding, this jagged island was home at one time to a group of ascetic monks who craved the isolation and austerity that the islands promised, for their spiritual health. The remains of their monastery, abandoned in the 12th century, are a compelling and sobering vision of the monastic life that would once have been lived here, but the climb up rocky steps can be challenging, and the trip out to the islands can only be made in good weather. The island is a Unesco World Heritage site.

After an island adventure, The Moorings in Portmagee is the place to warm up by the fire. You can spend the night in a room with a harbour view, enjoy great seafood and maybe spend a few hours in the Bridge Bar listening to the locals make music while you savour a glass or two of Guinness. You could even join in, if you know a song or can carry a tune.

Waterville is a small town further along the coast that boasts one of the best golf courses in the country. Tiger Woods comes here to golf and fish. Silent film star Charlie Chaplin lived here for years, Barack Obama has visited and Richard Nixon hid out in Waterville House after his disgrace.

“Seventeen U.S. presidents have roots in Ireland,” my Irish friend Will tells me.

I think a few Canadian Prime Ministers have had Irish connections too.

Kenmare is a serene town comprised of quiet streets lined with colourful shops and cottages. There is a stone circle and a haunting fairy tree, under which unbaptised babies were traditionally buried in the past.  Visitors still leave little tokens tied to the trees for luck, and to appease the fairies.

“Be careful to speak quietly when you are near the tree ““ the fairies don't like to be disturbed, and they are notoriously dangerous when they aren't happy,” Will warns me.

In the centre of town is the Park Hotel Kenmare, whose grounds are a gardener's delight, with green sloping lawns leading down to the bay and paths lined with rhododendron and azalea.

For an inland diversion, head out from Kenmare through Moll's Gap to Killarney National Park, where you can boat along the lakes and hike the McGillycuddy's Reeks, or take a jaunting car through the Gap of Dunloe.

East along the coast from Kenmare is Baltimore, where the town's castle is worth a tour, to hear the story of Barbary pirates who raided the village in 1631. If you take the local ferry out to Sherkin Island, you can tour the ruins of a Franciscan abbey, walk the island or visit one of the two pubs.

In Bantry Bay, in the sheltered harbour of Glengarriff, you'll find Garinish Island which is home to a subtropical garden property. The gardens were designed by Harold Peto and are lushly beautiful in every season. In springtime, the rhodos and azaleas are in full bloom.

A few miles from the coast, in the country near Skibbereen, is Liss Ard, another hotel gem with famous gardens. This estate, a remarkable mash-up of classic country house design and contemporary aesthetics, is known for its extensive gardens that occupy 150 acres around the hotel. The centrepiece of the gardens is James Turrell's Sky Garden Crater, a green experience that is both memorable and almost surreal. If you descend the crater and lie on your back on the stone plinth in the centre, your view of the sky and the grassy bowl of the crater's sides is otherworldly, especially at dawn or dusk.

I stopped in Kinsale to visit the wine museum in Desmond Castle and to sample the seafood and then headed for Shannagarry and Ballymaloe House.

This lovely property near the end of my drive is a quiet retreat, a country manor that feels like home, or how home would feel if mommy were Lady Ballymaloe. Each room in the hotel is different and unpretentiously comfortable. I'm in the Flower Room, with a view of the walled garden. The big draw at Ballymaloe is the dining room, renowned for its cuisine and for its dedication to local products and producers.  The hotel is run by Allen family. Just down the road is the Ballymaloe Cookery School, run by more Allens, cookbook author and chef Darina and her daughter Rachel. You can take cooking classes, walk in the extensive grounds, enjoy peaceful hikes to the coastal cliffs or plan a visit to the Jameson Distillery for a whisky tasting.

For a change of pace, spend a day or two in Cork, a bustling and prosperous city with its awell known English Farmers Market. The Hayfield Manor Hotel is a serene pocket of gardens and sophistication in the middle of the city, situated next to the university where guests are welcome to walk through the quadrangle and enjoy the campus. Blarney Castle and the Titanic Museum are nearby.

If returning to Shannon, arrange to spend a night at Ballyfin, just a 90-minute drive from the airport. This 600-acre estate hotel was named best new resort of 2012 by the Robb Report. A ten-year renovation has brought the venerable property from near ruin to near perfection. It is gorgeous, authentically furnished with period antiques but possessing all the modern luxuries.

High tea in the conservatory at Ballyfin, with scones, cream and jam, is a winsome way to bid goodbye to Ireland's green gardens and stately castles.

And with a bit of Irish luck, you will come back again.

If You Go
While you could depend on Irish luck to help you find your way, the Irish Tourist Board has excellent maps and driving routes, complete with not-to-be-missed highlights, dining suggestions and available accommodation choices.
Visit ireland.com for more information.
dromoland.ie
moorings.ie
parkkenmare.com
lissardestate.com
ballymaloe.com
hayfieldmanor.ie
ballyfin.com