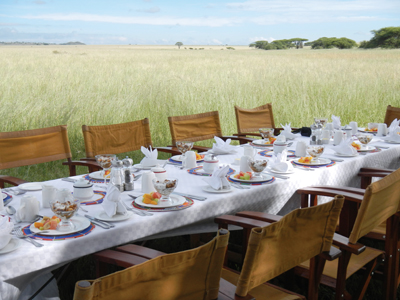 The grass landing strip at the Chyulu Hills is lined with animal skulls, bleached white by the unrelenting African sun. It's one of the first things you notice as you bump along the runway. It's generous to call it a runway, really, more of a drop spot in a wedge of land between three of Kenya's national parks: Amboseli, Tsavo West and Chyulu.

Besides the skulls, I make out one tattered windsock and two Maasai warriors leaning on the hood of a Toyota Land Cruiser. My ride is here.

This is not a landscape for the timid; for those who find a sense of security in neon lights, interlocking paving stones and streets peppered with bistros, boutiques and parking meters crying out to be fed.

This is an African landscape of savannah grasslands dotted with thorny acacia bushes, rolling out as far as the eye can see, until they are abruptly interrupted by the Chyulu Hills to the north and Mount Kilimanjaro to the south. We are used to mountains that bunch in groups, scrunched together, creating a continuous, sinuous barrier. But Kilimanjaro stands alone, rising from the empty plain. It is, according to my Maasai safari guide, Jonathan Konee, “the highest free-standing mountain in the world.”

The screen-saver backdrop of Kilimanjaro can be a bit distracting. But, bags loaded into the jeep, we weren't far along the dirt track before attentions ricocheted from the snow-topped peak to a “journey” of Maasai giraffes ““ six-month-old babies and several adults in rather casual nanny roles (allegedly, mother giraffes are like the Paris Hiltons of the savannah world ““ all fluttering eyelashes but not so reliable at staying on task). Jonathan cuts the engine and we settle in and watch as the lanky creatures pull leaves from the upper branches and languidly chew and chew and chew until all is gone.

The Chyulu Hills are well marked on any map of Kenya. Look them up and you'll be tricked by what looks like nothingness on the page. It's certainly the last place one expects to find a Relais & Chateau property, the ol Donyo Lodge, a clustering of 10 luxurious thatched-roofed, adobe villas where guests check in for assured anonymity and a menu of game-related activities including hiking, biking, bush walks and safari drives. ol Donyo is encircled by a thin line of electric fence to keep roaming elephants at bay (the scoundrels will trample everything beyond recognition), although other game like cheetah, dik-dik and impala can come and go as they wish. In the evening, Maasai guides accompany guests along the stone pathways to and from their cottages. In this place, we are the enclosed ones, although it feels like the furthest thing from entrapment. Being here feels like complete freedom.

In this ancient and fragile place, you are frequently on the lookout for wildlife. It's a tightrope strung between thrill and terror; the knowledge that creatures with the ability to kill are roaming at will. It doesn't seem to faze Jonathan who grew up steeped in the Maasai culture, one where young men made the transition into manhood by killing a lion in the bush. By themselves.

Traditionally this is true, he tells me, but with lion populations under threat there's been an attitudinal shift to have young warriors prove themselves through sports instead ““ spear throwing, running and the effortless leaping they are known for. On this 275,000-acre community ranch, hunting had whittled down the lion population to five in 2003. A decade later, there are now 35 resident lions living in the ranch's protected territory. It's another example of the delicate cultural transition from the old ways to new.

This statistic calms me (from an eco-balance perspective) but tinges me with unease, as the next afternoon we head out on a dusk game drive.

It's a vast landscape and we don't have a year to explore every nook and cranny of the smorgasbord of ecozones: bush, rolling grassland plains, mist forest and ragged, volcanic hills. Our 4WD jeep sticks to the lower savannah, the tall grasses riffled by the whiffs of breeze from the west.

Without a doubt, whatever wildlife is out there knows we are coming long before we arrive ““ we've signalled our presence as the jeep's gears grind along rutted tracks in the dirt and we emit a continuous click of camera shutters. Yet, it doesn't seem to interrupt the flow of the creatures roaming the open savannah. Here, they rule.

Our first encounter smacks of civilization but is very typical of the Maasai culture in this part of Kenya: a large herd of cattle being tended by young men wrapped in the shíºkí , the traditional robe made of red checked cloth.

“We are nomadic movers in search of water and grasslands,” explains Jonathan. “These cattle belong to many families ““ they gather together and pay one herder to take care of the cows.”

Cattle are integral to the Maasai culture. Their diet includes the blood of the cow, milk and meat . . . and not much else. No regular intake of veggies, no fish and certainly no chicken. (“I tried it once ““ don't tell my mother,” Jonathan confides.) A man's wealth and status is determined by the size of his cattle herd and traditional marriages are arranged based on the number of cows that are at the centre of the transaction.

The jeep inches along the dusty ruts and the herd of cattle barely gives an inch. They open to let us pass, moving fluidly around us, like a school of fish. It must be something about the African setting ““ even a herd of cattle becomes exotic in this place.

And so I find myself with my camera always at the ready, having adopted the mantra that in this setting, even the ordinary is somehow transformed into pure magic. We explore and graduate from cattle to another journey of several dozen giraffes and large dirt mounds teeming with termites. We come across the dusty prints left by elephants in the dirt ““ the giant beasts that have managed to elude us so far. I am taking photos of prints. Not elephants yet, but prints. And even the prints in the dust are thrilling and exotic.

As the sun begins to drop in the sky, splashing everything with that delicious warm hue that photographers coin the “golden hour,” a herd of elephants appear on the horizon. How is it possible that these massive creatures came out of nowhere?

We race to get closer and at a respectful distance Jonathan stops the jeep so we can sit and watch in silence. The elephants don't seem pleased by the intrusion ““ the adults quickly form a defensive circle, sheltering the month-old babies in the centre. Message received.

The only sound is the soft wind across the savannah and the seemingly endless press of camera shutters. Aware that I am at risk of experiencing this only though the camera lens, I beat back temptation and force myself to put my camera away and watch with my own eyes.

That night, on the open terrace at ol Donyo, we compare the images captured by our digital viewfinders. But, this is the thing about Africa ““ it's those memories that cannot be pressed onto film that make their way into your heart: the way the sky looks in the morning, the way the soft colours shift on the grasslands, the warmth of the Maasai smiles and the sounds of creatures that fill the nighttime air. Many of these things are not tangible, but they are all deeply touching.

The next morning we leave this remote but special place. Mount Kilimanjaro still commands the view in the distance. The pilot revs the engines, we rise into the air and I look out through the small scratched window of the plane. I see miles of green savannah, a windsock and two, tall Maasai warriors leaning on a jeep.

If you go
June, July and August are the best time of the year to see wildlife. During this dry season, animals tend to migrate to sources of water, making the chance of sightings much better. While this part of Kenya does not match the intensive game sightings of Maasai Mara National Reserve, you will still see plenty of game, including impalas, giraffes and elephants in an uncrowded, remote setting.
MagicalKenya.com

The ol Donyo Lodge overlooks the savannah and the twin hills of El Mau. Each cottage has bedrooms opened to the elements on one side, outdoor and indoor showers and rooftop decks with star beds (thick beds topped with luxury linens, enclosed by mosquito netting and open to the star-splashed African sky). Stays begin at $455 per person/night (low season) and include meals, luxury bush breakfasts and all activities, including
game drives.
greatplainsconservation.com