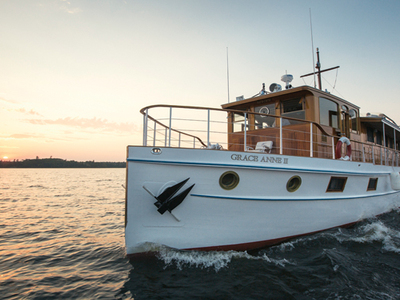 Life aboard the stunning, antique yacht, Grace Anne II, is gracious and the company most definitely charming as I find myself the only male passenger aboard during a Muskie fishing expedition to Lake-of-the-Woods. The other passengers are a group of young women from Toronto and San Diego willing to try for a big fish from a big lake.

The 85-foot (26-metre) yacht was the last boat built by the Ditchburn Boat Building Company during the height of the Great Depression. She was ordered by Winnipeg department store magnate John Forlong as a family cruiser for exploring Lake-of-the-Woods on the northwest edge of Ontario. She was the last boat built by Ditchburn. By 1931 the company was floundering and had two contracts: a 117-foot patrol boat for the Canadian government and the Grace Anne II.

It took the Ditchburn craftsmen at the Orillia plant nearly five months to build the luxury yacht and her final price tag was reported to be $75,000.  The hull was constructed with oak frames and planked with mahogany over cedar.

Following the delivery of the Grace Anne II to John Furlong, Ditchburn went bankrupt in 1932.

Delivering the yacht created its own engineering problems. The boat was launched in Orillia and made its way to Port Arthur. She was hauled with a crane and laid onto her side aboard a purpose-built rail car, then shipped to Rainy River at the south end of Lake-of-the-Woods.

Before her railroad voyage, CNR track engineers built a scale model of the route to make sure the vessel would fit through all the tunnels and bridges. At one point the fit was so tight on the #681 Bridge near Fort Frances, there was only two inches of clearance.

Grace Anne II changed hands a number of times, but the owners responsible for this beautiful ship's longevity had to be the 3M Corp. of Minnesota who used it for executive retreats and sales promotions over the following 40 years.

The vessel is still operated on the lake as a charter vessel by the Chia family of Winnipeg.  It still sounds its whistle when passing various landmarks and local kids run down to the shore to watch her pass.

Grace Anne II is í¼ber luxurious. On my first night aboard, I manage to lay my head on the pillow, but I can't bring myself to turn out the light. My stateroom seems to emit its own warm glow from the beautifully varnished mahogany bright work to the pleasantly soft, sconce lighting.

We'd been up since shortly after dawn, but there was so much rain sunrise wasn't a factor. It was that kind of a summer in central Canada. My fishing partner, Josie ““ a novice at any kind of fishing ““ so to her it was all fun.

Fortunately my frustration (and neither was my lowly muttered language) wasn't registering on her as she was intensely focused on her own casting and retrieving.

Winding up and hurling the bait toward a patch of weeds I was hoping to break my Muskie jinx by cranking a big ““ hell any ““ Muskie out from under the lily pads.

After a couple of hours of this strenuous exercise our guide Chris Batiuk, the Grace Anne II's Lead Recreational Guide, announced, “it's probably best if we head toward a pickerel hole closer to Big Narrows [base for the Queen Anne II]. It's been producing regularly all through our weather-funny summer.”

Pickerel are the fall back when the Muskies don't appear. During our three days of fishing, we pick off enough to make a shore lunch feast. We also catch several big pike a handful of other species.

At one time the lake was the second biggest producer of caviar that was shipped to Russia, but overfishing killed the trade. Today the sturgeon that produce the precious eggs are starting to make a comeback.

One of the great treats of fishing in the Canadian North is the legendary “Shore Lunch” made from the morning's catch. It always consists of fish fried over an open fire and lots of fresh cut potatoes cooked in the same pan. Pickerel is the mainstay of these lunches.

Food aboard the Grace Anne II and at the shore-side lodge came as an utter surprise.

The yacht has its own French chef: Nicky Dartiailh from Bordeaux. He is classically trained and produces miracles, like rack of lamb, poached lobster, Chilean sea bass and a range of soups in the tiny galley then sends them up to the main deck dining room in a dumb waiter that also doubled as thrill ride for the Forlong kids when the family owned the boat.

In the down season ““ winters are long here ““ Chef Nicky doubles as a shipwright and works with Captain Pat Howard doing refits on the boat and refinishing the bright work.

Chef Nicky is also the executive chef for the land-based part of the operation. He prepares the food for the guests of the main lodge with the help of Chef Jason McIssac.

The 7,000 square-foot (3,000 square-metre) luxury lodge sits on a five-mile long (eight-kilometre) private island. Unlike most fishing camps, this one contains a 1,000 bottle wine cellar and cigar humidor and offers outdoor showers, a hot tub, sauna, ping pong table, clay and skeet shooting, golf driving range, kayaking and stand up paddle boards for up to 20 guests.

Although you can book the yacht as an individual or couple, you'd better have an Arab Oil Sheik level credit card. Guests at the lodge however, are welcome to go out on the evening appie and cocktail cruises. Most of the bookings for the yacht are corporate or family get-togethers.

There are patrons who return time-and-again to the lodge and yacht. One Finnish repeat customer is known to bear hunt in Russia one day then to fly to the lodge the next in his private jet.

Lake-of-the-Woods is an eye-opener. The quantity and diversity of bird species is impressive. I've already made a mental note of the mixed deciduous and coniferous forest that is prime partridge and grouse territory, but it's two unexpected species that surprise me.

Coming from the deep south of Ontario, pelicans are beyond my ken. So are bald eagles.

This far north, Lake-of-the-Woods becomes the eastern edge of the Mississippi Flyway ““ the continental avian super-highway ““ that hooks off to the west as it heads toward the arctic regions. Further south, on the lower lakes, it nudges Lake Erie. Which is why Pelee is such a terrific place to check out birds. It extends from the Alaskan coast of the Beaufort Sea to the tip of Patagonia making it the longest in the western hemisphere.

For sheer numbers, the species we encounter over just three days is impressive. There are great blue heron; kingfishers; crows; herring gulls; ring-billed gulls; arctic terns; double crested cormorants; and warblers. This is also the eastern range of the American white pelicans, but the most fascinating story is that of the local population of bald eagles.

During the 1950s DDT killed a lot of birds by poisoning the food chain. This drove many species, like the peregrine falcon, to the edge of extinction and bald eagles weren't far behind. Scientists soon saw the problem and in a rare move; the government listened and banned the pesticide.

In Southern Ontario the move did not come a moment too soon. There still aren't any vast numbers there. However, Lake-of-the-Woods proved to be a different and successful story. Eagles thrive on the lake because of the abundant fish and today Chris Batiuk estimates there are at least 80 resident nesting pairs of the birds.

They're more aloft than aloof. When we toss the hook out to fish two pair settle on to a tree above our heads and scream un-eagle like squawks.

As well as deep pickerel holes and submerged rocks, the lake has an incredible number of islands ““ generating 65,000 km of shoreline without factoring in the islands and a whopping 105,000 km when you do. Locals brag this lake has the longest shoreline of any in Ontario ““ including Superior.

The region has been a trade hub for almost 7,000 years. Archaeologists have found seashells from the Mississippi Gulf Coast; volcanic glass from Mt. St. Helens and copper from nearby Lake Superior.

Sites at Rainy River contain the oldest burial mounds in Northwestern Ontario. There are 15 burial mounds and the remains of two-dozen village here. These and the large number of pictographs (rock paintings); petroglyphs (rock carvings) and petroforms (where rocks were used to outline images) found throughout the area, have encouraged the federal government to make Manitou Mounds a National Historic Site.

In recent history three main tribes shared the region: the Ojibwa, Cree and Sioux.  Constant battles raged throughout the region among the tribes and with white explorers. More than one geographic name, like Massacre Island and Aulneau Peninsula reflects these battles.

The first recorded European visit to the region was by the Jesuit Jacques de Noyon in 1688 and he managed to survive quite nicely, but a while later Pierre La Vérendrye was massacred here along with 19 others on an island in the lake.

Despite the killings the fur trade could not be stopped and the region became an important waypoint in westward expansion. Lumbering and mining eventually took over. In the early part of the 20th century the lake boasted the largest mine in Northwestern Ontario ““ the Sultana. The Sultana yielded a million dollars worth of gold bullion when a million was still a number to be reckoned with.

At this time the town of Kenora did not officially exist although there were three villages clumped closely together ““ Keewatin, Norman and Rat Portage. The main settlement was Rat Portage.

Ever mindful of the negative image Rat Portage portrayed to the region's new and burgeoning tourist trade, the town fathers got together in 1905, synthesized a new name and rechristened the three as Kenora. “Ke” for Keewatin, “No” for Norman and “Ra” for Rat Portage.

It was around the turn of the 20th century that John Forlong, the man who had the Grace Anne II built in Muskoka and named for his wife, came onto the scene and Lake-of-the-Woods became his summer playground, as it did for so many others of the near west's wealthy.

If you go
Kenora is five hours west of Thunder Bay on the Ontario Manitoba border. Winnipeg is three hours to the north. Lake of the Woods is accessible by car or air.

Westjet and Air Canada fly into Winnipeg and there are shuttles available. The Grace Anne II will pick you up in the Empress, a luxury limo-bus outfitted with TV, DVDs and wireless Internet.

Porter Air flies into Thunder Bay and links up with Bearskin Airlines (807.548.2087) which is the only airline flying into Kenora.

Lake of the Woods Tourism
lakeofthewoods.com

Ontario Sunset Country
For a complete list of lodges and fishing camps:
ontariossunsetcountry.ca