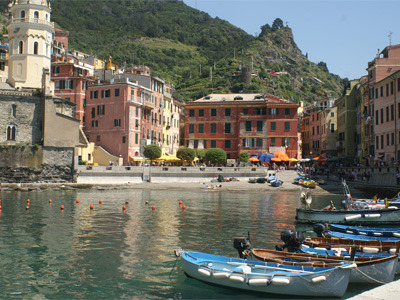 Taking a cruise along the Mediterranean coastline of Italy and France allows you to experience a different interest, at a different port, everyday. Enjoy wine tasting in Tuscany and alfresco dining at a charming fishing village in Cinque Terre. Wander the poignant streets of Pompeii and be amazed by the antiquities of Rome. Be rendered speechless during a drive along the dramatic Amalfi Coast and wowed by the multi-million-dollar yachts in Saint Tropez.

Royal Caribbean Cruise Lines (RCCL) has deployed more ships than ever  to Europe to meet the interests of
vacationers who want to sample many highlights of the region in a short period of time, without spending Euros, renting a car or taking a train.

While there are currently eight RCCL ships sailing this year, that number will grow to 11 ships in 2011. The line is also touting many new shore excursions and customized tours where up to 10 guests can travel in a private vehicle with a guide, rather than a large tour group.

Betsy O'Rourke, senior vice president of marketing for RCCL says, “If you've been waiting for the right time to cruise in Europe, it has arrived. With so many great itineraries and ships, RCCL cruises and cruise-tour land packages offer the best value for vacationers to experience vibrant cultures and compelling destinations. Get onboard, unpack once and enjoy royal treatment while you cruise the Riviera.”

Here's a sampling of shore excursions:

NAPLES, ITALY: Be driven along the spectacular Campanian and Amalfi coasts by a driver who knows how to navigate hairpin turns and avoid sheer drop-off cliffs. With its ocean views and beautiful vistas, this drive is one of the most breathtaking routes in the world and will leave you gasping at each bend.

Arrive in the cliff-top town of Sorrento, a popular resort due its charming atmosphere, spectacular location and local cuisine. Visit a local farmhouse nestled in the hills. The family-owned farm produces mozzarella cheese, fresh vegetables, olives and lemons. Visit the antique wine cantina and learn about the production of olive oil and hand-made mozzarella. After the tour, taste the fresh cheese, juicy tomatoes, salami and bread in a peaceful setting of lemon and olive trees overlooking the town.

After lunch head to Pompeii. Enjoy views of Mt. Vesuvius, the still-active volcano located about 15 miles southeast of Naples. Pompeii is one of the most famous excavation sites in the world. Once a thriving city about 2,000 years ago, it was devastated by the eruption of Mt. Vesuvius in 79 A.D. when 30 feet of volcanic ash and pumice stone covered it.

Explore the temples and porticoes that lay beneath the ash for centuries. The baths, theatres, wrestling ground and villas stand eerily empty, yet there are still many echoes of Pompeii's daily life. Visit the wine shop and bakery and see mosaic floors and brilliant frescoes on walls. The plaster casts of the victims are particularly poignant.

LIVORNO, ITALY: Travel through the Tuscan countryside and admire the soft rounded hills, medieval architecture of the villages and the silver green of the olive trees that mingle with the dark green of the cypress trees. On reaching a family vineyard, the process of winemaking and the traditional methods of bottling are explained while you tour the premises. Enjoy a tasting of several wines produced in the area accompanied by meats and bread.

GENOA, ITALY: Drive south along the coast passing the city of La Spezia and arriving in Manarola, gateway to Cinque Terre, a national park and territory protected by UNESCO. This region is characterized by steep slopes cultivated with vines thanks to man-made terraces. The coast falls sheer to the sea, making the cliffs into works of art. The five quaint fishing villages you'll see and visit have been untouched by modern times.

Walk along the Path of Love, a spectacular path along the seaside where graffiti features romantic poetry and vows of undying love. Board a motorboat for a short ride to Vernazza, one of the five villages to explore the tiny shops and enjoy a cold, delicious gelato. Admire the colourful fishing boats and watch children playing on the pebble beach.

ROME, ITALY: Explore the famous ancient ruins, reflecting 12 centuries of Roman cultural, political and religious history. Walk to the Trevi Fountain and capture the essence of the city's grandest fountain and a masterpiece of Baroque Rome. Follow tradition and toss a coin into the fountain to ensure your return to Rome.

You'll also visit the Roman Forum, the heart of ancient Rome, where the creation of the Roman civilization is reflected in the vast ensemble of ruins. You'll walk through Via Sacra (Sacred Way), the route followed by religious and triumphal processions. The imposing triumphal Arch of Titus was erected in AD 81 by the Emperor Domitian in honour of the battle victories of his brother and father in Judea.

The Roman Colosseum, symbol of the Eternal City, is one of the most important monuments of ancient Rome. A masterpiece of classical architecture, the Colosseum is an enormous amphitheatre where gladiators, Christians and wild beasts once battled to the death in front of 50,000 spectators.

You will also see the impressive Arch of Constantine. After lunch drive to the Vatican City to visit St. Peter's Basilica, the largest church in the world. Among the many fine pieces of art on display are Michelangelo's “Pieta” and the beautifully carved Bernini Pulpit.

SAINT TROPEZ, FRANCE: It was in the 1950s that the little port of Saint Tropez, originally just a simple fishing village, became fashionable by attracting the literary set from St-Germain-des-Pres in Paris and many actors and actresses such as Brigitte Bardot. It is still a crossroads where photographers, writers, artists and celebrities mix.

Enjoy walking along the waterfront and seeing the multi-million dollar yachts, yellow and red Lamborghinis and black and silver Maseratis. The neighbouring cobblestoned streets feature pink and yellow houses that have been converted into cafes and pastry shops, luxury boutiques, galleries and antique shops. Be sure to see the Place des Lices, where many celebrities are seen playing petanque, a game similar to bocce.

Be sure to budget for shore excursions. They range in price from about $56 for a two-hour hike in Naples to $223 for a 10-hour tour of Rome, per person. Customized tours start at about $1,800 for a van that carries 10 people, for a full day tour that meets your personal interests.

Many of RCCL's new tours focus on families such as Pasta Making in Tuscany, Taste of Rome for Families and Biking and Ice Cream Tasting in Medieval Tarquinia. Visit rccl.com.