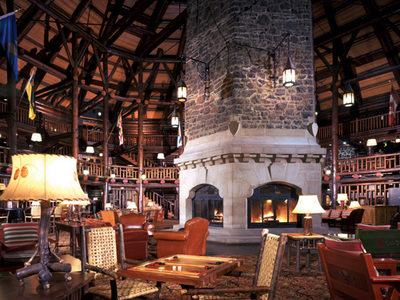 There's a vibe in Montebello that has me thinking: food family. Not as in groups under the Canada Food Guide. More like the way growers, producers and chefs in the tiny Quebec village an hour outside Ottawa have pulled together like a “food family.” They're crafting menus, aging cheese and brewing beer to fill plates and top up glasses for everyone from discerning locals to day-tripping locavores. Best of all, they're a spirited family, cooperating to create taste and harmony.

Jean-Franí§ois Fortin is no newcomer to the restaurant business. The Executive Chef at the Fairmont Le Chí¢teau Montebello is passionate about supporting the producers of the Outaouais region, and his faithful farm-to-table philosophy has been a first step in how local food stops have been cross-pollinating each other's offerings.

“Montebello and the Outaouais have so much to offer,” says Fortin as he strolls through the small Jardin du Chef on the grounds of the chí¢teau, Canada's historic red cedar lodge. “You can't just say it, you need to live it and do it for real. So, I don't only buy local, I also promote the local farms.”

Three times a week, resort guests can meet the chef in the garden to learn about the partnership he's developed with local organic farmers who provide him with specific seeds and assist with the planting of his small garden. For Fortin, it's a hands-on way to interact with guests and explain about the products he sources from the farmers and how he uses the ingredients in his kitchen. Visitors who opt for the resort's daylong Chef to Farm package get to spend time with Fortin, touring local producers and then eating an evening meal built from ingredients bought along the way.

“This is local cuisine,” Fortin explains. “It's a partnership. When I cook I want it to be fresh and simple. People want to be able to identify the flavours on their plate. It shows respect for the product and respect for the producer. It's a relationship you build. Montebello is a small town and we all need to work together.”

One look at Fortin's speed dial tells the whole story. On a weekly basis he's on the phone with almost a dozen local producers ““ from those who grow root veggies to the artisanal cheesemaker ““ staying on top of what's new, what's at its peak and how they can show the best of their own backyard.

The dishes Fortin creates show this commitment. Cheeses from a stone's throw away, at the Fromagerie Montebello, pop up on the menus at the chí¢teau's Restaurant Aux Chantignoles. A deliciously creamy Mushroom Risotto entrée incorporates the fromagerie's award winning Rebellí­on 1837 blue cheese, adding kick to the meaty shiitake and king mushrooms. The mild Tete í  Papineau cow's milk cheese is melted into mashed Yukon Gold potatoes and served alongside showstopper slices of roasted lamb. The Outaouais Cheese Plate appetizer features cheeses ““ goat, cow's milk and sheep ““ that come only from the region's four artisanal cheesemakers. When the terrace grill is open in summertime, Fortin uses the fromagerie's white curd to top burgers and poutine ““ that oh-so signature snack of Quebec.

Rarely does a new venture hit on all cylinders when the doors first open, but Les Brasseurs de Montebello has nailed it right out of the gate. Brewmaster Alain Larivií¨re shares Fortin's vision for working together, like a family. Since hanging out his shingle on Montebello's main street, things have been hopping. The interest in local, small-batch crafted beers is strong.

“We only carry Quebec beers,” Larivií¨re explains, pointing at the 20 taps mounted on the shiny metal checkerplate behind the thick, pine bartop. Sturdy feed lines go directly from the checkerplate to the chilled kegs. “Two are our own that we brew in Saint-Polycarpe just an hour away.

“The beer comes cold from the fridge, right into your glass. That's very important because heat will change the taste. The fridge is always at three degrees and the beer comes out at four or five degrees.”

It wouldn't be a stretch to while away a summer's afternoon on the terrace at Les Brasseurs, nibbling on a cheese tray from Fromagerie Montebello and sipping your way through glasses of beer. A standout is their own La Reine du Mont Vinoy, a smooth blonde ale with the aroma of local honey. Larivií¨re has also designed “the world's first EPA ““ í‰zilda, Pale Ale,” a blonde beer with a hoppy scent he's named Le Fantí´me d'í‰zilda, after the alleged ghost who wanders the halls of the Manoir-Papineau, a local National Historic Site.

“There are just four basic ingredients to make beer ““ water, hops, malt and barley,” says Larivií¨re. “But the possibilities are endless. We also have a raspberry white wheat beer, a cranberry beer and a spice beer that leaves you with a peppery taste in the throat.”

There's been a little cross-street collaborating on Montebello's rue Notre-Dame, the main street. Larivií¨re and owner Luc Gielen of ChocoMotive (Montebello's go-to centre for anything with a whiff of cocoa bean) are planning a dark beer that incorporates the rich flavours of dark chocolate. Originally from Belgium and trained in pastry making, Gielen and business partner Gaí«tan Tessier are renowned for their high quality indulgences, made from fair trade, organic chocolate imported from Panama, Peru and the Dominican Republic. “Grown in the south, consumed in the north,” states the sign in their shop.

ChocoMotive is part of the provincial artisans at work program. Store shelves are filled with chocolate products of all kinds ““ from a rich hot chocolate mix to bars and chocolates infused with flavours including blueberry, quinoa, hazelnut and maple syrup. Visitors press their noses against the glass window of the open kitchen, mesmerized by the round-and-round of the mixer tempering the melted chocolate. Chocolate moulds are in the process of being filled, tapped to release air bubbles and then placed aside to set. It's a process that is repeated over and over by the chocolatiers.

“Tasting chocolate is like wine,” Gielen suggests, “best done in steps.” A small tray appears and I am instructed to taste beginning with the sweetest (a white chocolate and pecan morsel), working up the scale with bitterness. A caramel and sea salt centre dipped in 70 per cent dark chocolate leaves me jonesing for more of the delicate salty hit that enhances the praline effect.

And, this is what I love about Montebello: you get close to things, whether it's talking chocolate with the man creating the sweets, walking the garden with the chef, or sipping beers with the master brewer. There is a revival happening in the small village of Montebello. And they all have time to include you in the tasting.

Fairmont Le Chí¢teau Montebello is the perfect four-season resort destination. Located on the banks of the Ottawa River and surrounded by hardwood forest, it boasts all the luxe resort amenities: golf, spa, cycling, swimming and tennis.
fairmont.com

Just minutes from the village are a landscape of pristine lakes, craggy Canadian Shield and the call of the loon. Kenauk Nature (formerly a Fairmont property, now part of the Nature Conservancy of Canada) rents 13 luxury chalets on private lakes. It is the place to unplug and unwind. Fishing, hiking, skeet shooting, wildlife watching.
kenauk.com