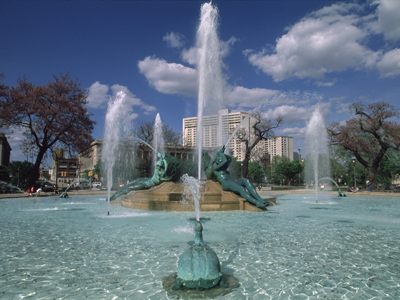 It was a fine sunny afternoon that I arrived in Philadelphia. The kind of day easily spent at the beach, but having never visited before, I was eager for the 20-minute ride from the airport to the city centre to pass. Philadelphia, you see, is a city steeped in history, stacked with art and architectural gems; not to mention thriving tree lined neighbourhoods dotted with bistros and boutiques.

Home base for this weekend in Philly is the Four Seasons Hotel Philadelphia, and with an address of 1 Logan Square, my expectations are high. Logan Square (or sometimes Circle, my guide tells me) is the starting point for exploration of the Benjamin Franklin Parkway, a mile long stretch of real estate meant to impress; lined with museums, galleries and impressive public spaces on all sides.

As expected, the Four Seasons does not disappoint with a shiny-capped doorman, all smiles as he holds the taxi door and whisks my bags inside. But the view from the room is the real gem, six stories up with an unparalleled vista across Logan Square, its stunning fountain and all the way up the Parkway to the Philadelphia Museum of Art. The hotel is perfectly situated for a walking tour of the city and the Parkway, and I can see the route I will travel ““ as soon as I get into walking shoes ““ from my hotel suite.

The collections of the Philadelphia Museum of Art (PMA) are among the largest in the United States as the third largest art museum in America and its assets are actually housed at the Perelman Building on nearby Pennsylvania Avenue, the Rodin Museum, in two 18th-century houses as well as in the main building on the Parkway.

Even from my vista at the Four Seasons up the tree-lined avenue, the PMA is impressive. The building is constructed on a massive scale covering more than 10 acres and housing 20 galleries, rising up like the Parthenon at the top of the hill. It is considered a crowning achievement of Philadelphia's “city beautiful” movement in architecture of the early 20th century.

There really is simply too much to describe about the PMA. Any art lover would want at least a day to wander through its massive collection that includes Renaissance, American, Impressionist and modern art. Even a novice of art appreciation will understand the impressive pieces that include works by Cézanne, Monet, van Gogh, Renoir and Picasso. Two of the museum's greatest treasures include van Gogh's “Sunflowers” and “Large Bathers” by Cézanne.

I would be remiss not to mention, that the building has also more than a little celebrity. The east entrance of the PMA is where you'll find the infamous set of steps that Rocky Balboa ascended in the movie, and people flock to the location to follow in his footsteps and take a photograph with his bronze likeness. The Rocky Statue is one of the most famous pieces of public art ““ of a rather large public art collection in the city ““ and was donated by Sylvester Stallone in 1980 after filming completed.

Once out on the Parkway, the first stop has to be Swann Memorial Fountain at Logan Square. The fountain is the work of Alexander Stirling Calder, and captures large Native American figures to symbolize the area's waterways. Large swans, turtles, fish and a frog spout water toward the main water feature: a 50-foot geyser in the centre.

What is striking about the fountain and the square ““ aside from its stunning scale and beauty ““ is the activity in the square. Everywhere you look there are children playing (even in the fountain), office workers enjoying lunch under a shade tree, joggers, dog walkers and people simply enjoying the space.

This is not by accident. Philadelphia's five squares, (Centre, Franklin, Logan, Rittenhouse and Washington) and much of what is wonderful about the city today, is thanks to the vision of William Penn, and his surveyor Thomas Holme, who drew up a plan of streets on a grid, separated by orchards and green spaces.

The namesake of the state of Pennsylvania, Penn believed in religious freedom and many of the democratic principles he set forth served as inspiration for the United States Constitution.

Off the Parkway, but a short walk from Logan Square, a statue of Penn is perched atop City Hall, created by Alexander Milne Calder. At the time of its installation, there is said to have been a gentlemen's agreement that no building would be erected higher than “the brim of Billy Penn's hat.” Of course today, a handful of buildings have surpassed that limit, but you can enjoy the view across the city from the tip of Penn's toes.

For those that love to explore old buildings, a trip to the top of City Hall is a must. Book your ticket in advance, as entry to the tiny, antique elevator is limited. A creaky ride to the top of the tower offers the finest view across the city to be had, as well as an up close look at the sculptural wonder that is the 36-foot tall, 53,000-pound likeness of William Penn.

The sculptor, Alexander Milne Calder, also created most of the other 250-plus sculptures that adorn the massive building.

Continuing along the Parkway, a stop at The Rodin Museum is a must. This is a small space in comparison to the vastness of the PMA main building, but it's quiet and reflective, perfumed by the lavender plantings surrounding a reflecting pool beyond the entry gate.

The next stop for art and history lovers is The Barnes Foundation. This is a unique collection, amassed by Dr. Albert C. Barnes between 1912 and his death in 1951, originally housed and displayed in his own unique style in his mansion in Lower Merion.

The new Barnes Foundation is a clean-lined modern masterpiece on the outside, cleverly juxtaposed to a faithful recreation of the installation of the original Barnes.

To add to the impressive collection of architecture, art and history on every corner, the City of Philadelphia has a colourful collection of public art installations, and an active program to jury, collect and select placements for new works.

One of the most unique initiatives is the Mural Arts Program, which sees walls throughout the city transformed into murals that capture and captivate the neighbourhoods in which they are placed. Over the 25 years of the program more than 3,000 public works have been produced. Keep an eye open for pieces as you explore the city, or take a trolley tour via Philadelphia Trolley Works.