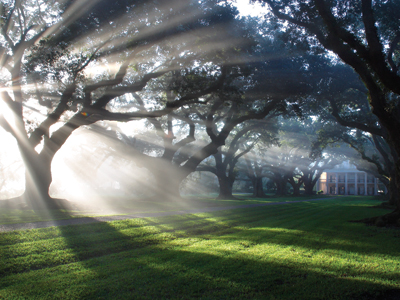 Visiting Louisiana for one of its most boisterous attractions ““ the storied city of New Orleans ““ is certainly worth the trip, but so many secrets lay just beyond. Century-old Cypress trees, moss-laden Oaks, eerily still swamps and swish old estates hold the secrets of a time gone by, and lay just a short trip down the Mississippi.

The area referred to as “Plantation Country” encompasses three parishes: St. Charles, St. John and St. James, placed neatly between New Orleans and Baton Rouge. There are 10 properties to explore, each with its own unique tale to tell. Many, you may already have caught a glimpse of as a supporting character on the big or small screen.  During our Louisiana long weekend, we visited three, for a tantalizing taste of classic southern hospitality.

OAK ALLEY PLANTATION
This is surely the grand dame of the plantations of Louisiana. The vista looking down the long walkway to the two-storey, columned porches of Oak Alley is surely one you'll remember from the silver screen. Live oaks line both sides of the walkway, their arms outstretched and forming a living embrace that graciously welcomes visitors through the gate and to the front door.

The distinguished row of trees for which the home is named, are more than 300 years old. The iconic quarter mile is made up of 28 Virginia live oaks, planted in two equal rows, 80-feet apart. The live oak, noted for its hardiness and stately stature, is so named because it is an evergreen, shedding its leaves only as new ones emerge. It is considered one of the most beautiful trees in North America, and is a symbol of the elegance of the old south.

This is the panoramic view you will have noticed as Brad Pitt rode his mount under the trees in Interview with the Vampire; and it's Oak Alley's own trees and sugar cane fields that played stage to Mathew Mcconaughey and Woody Harrelson's characters in True Detective.

Oak Alley was built in a time when the sugar industry was booming, and sugar cane plantations and their stately homes lined the Mississippi River. One of the plantations in St. James Parish originally owned by the Roman family, Oak Alley has had the good fortune to have fallen into hands over that years that saw her refurbished and updated, while maintaining all the historic detail and charm she had when she was built. Now cared for by a trust, you can explore the “Big House” as well as recreated slave quarters, paying homage to the reality that made plantations like this prosper. A popular tourist destination, you can also experience recreations of a Confederate officer's tent and 25 other self-interpretive areas. Tours of the “Big House” are ticketed and guided, arrive early to buy your ticket, so there's time to indulge in a pre-tour Mint Julep at the cafe.

HOUMAS HOUSE
While the home at Houmas is surely beautiful, you can spend your entire visit here exploring the lush gardens.

The current owner is Kevin Kelly, a man who fulfilled a lifelong dream by acquiring the property in 2003. He has carefully cared for Houmas House, so that the mansion today reflects the best parts of each period in its rich history alongside the big bend in the Mississippi River.

By the time of the Louisiana Purchase in 1803, the plantation was established and producing sugar. Construction on the mansion began about 1810 and was completed in 1828. By that time Houmas House began to increase land holdings, eventually growing to more than 300,000 acres.

Described in its heyday as “The Sugar Palace,” an original French Provincial style home that was erected on the property became living quarters for the staff that served the great house. Connected by a carriageway to the mansion, it is but one of many features of the property to explore.

The Gardens of Houmas House Plantation are where the tour begins and ends, are of course a popular spot for photographers and demand a leisurely stroll, at the pace demanded by a sultry southern afternoon. The gardens boast a lush 38-acres, dotted by fountains and statues, ponds and exotic plants. You'll likely come to pass by the gardener if you stroll the right path, undoubtedly followed by one of the owner's dogs.

If you want to retire for the eveing in the style of a sugar baron, you can spend the night at Houmas. A row of cottages are nestled along an alley of ancient oak trees with a view of the world famous gardens, the breeze from the Mississippi cooling the night air.

WHITNEY PLANTATION
Opened in 2014, the Whitney Plantation is the only plantation museum that tells the story of the slaves of Louisiana.

There is a hushed reverence to this place, unlike the bustle of the other plantations. The tour begins at the simple, white painted church with a film about the history of the place and the lives of those who worked its fields. Inside the Antioch Baptist Church, donated to the Whitney Plantation, is where you will first see one of the 40 statues of slave children that inhabit the Whitney. The statues, created by artist Woodrow Nash, depict the reality that many children were among the slaves, and serve as a reminder that slavery effected families and generations of those who helped make plantations thrive.

The Whitney property includes a restored “Big House,” in French Creole style, and is one of the best preserved Creole plantation houses standing on River Road.