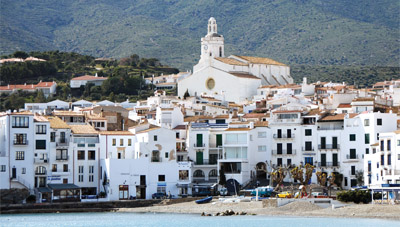 More than 20 years after his death, Spain's most notorious contribution to the art world is suddenly a very hot commodity.

Salvador Dalí­, the Catalan surrealist, is showing up everywhere.

The world has always been beguiled by the man with the pointy moustache, but his popularity has never been greater than it is right now. Twilight heartthrob Robert Pattinson portrayed him in last year's film, Little Ashes. The world's sexiest man, Johnny Depp, is rumoured to play Dalí­ in an upcoming movie, as are Al Pacino and Peter O'Toole.

How do you explain that kind of attention? Perhaps it is because both the man and his art leave so many questions unanswered.

Was he insane or brilliant or both?

While Dalí­ is only one of many famous artists to be produced by Spain, he was arguably its most controversial. At a Surrealist exhibition in London in 1936, for example, Dalí­ decided to give his lecture dressed in a diving suit decorated with plastic hands, with a radiator cap on his helmet while holding two Russian Wolfhounds on leads.

There was the time he showed up for a lecture in Paris in a white Rolls Royce filled with 500 kilos of cauliflower, or the time he declared that he loved his wife Gala so much that when she died he would eat her.

If the mystique of the most inscrutable artist of the 20th century intrigues you, then a visit to Catalonia is something that will help you to find, if not the answers, some newly engrossing questions. A visit here, where he was born and where he returned as often as he could, helps to explain something of the painter and his work. In this unspoiled and ruggedly beautiful corner of north eastern Spain, the traveller with an eye for art and a mind for history can follow the story of this mustachioed artist and the audacious life he led with Gala at his side.

It's a bonus that the area is also home to some of the best gastronomy in Spain, charming and virtually undisturbed medieval towns, excellent wines, and historic hotels.

The rocky outcrops of the Costa Brava coastline frequently appear in the work of this Spanish surrealist painter. Look closely at his most famous painting, The Persistence of Memory in the collection of the Museum of Modern Art in New York. Beyond the improbable melting watches and the ants lie the realistically rendered golden contours of his beloved Catalonia.

It is here in Catalonia ““ in Port Lligat where he lived and painted ““ in the castle in Pubol which he built for Gala, and in Figueres where he was born and is buried that you can grasp something of this haunting, and haunted artist.

These are the three properties in the Alt Emporda area on the Costa Brava that form the Dalí­-Gala triangle. They are close enough together that each could be a comfortable day trip, combined with stays in some of the excellent hotels in the area. And since this is a part of Spain that is justly proud of its cuisine and local wines, you will dine well.

Begin your journey with a visit to Dalí­ and Gala's home, the most personally revealing of the three locations. In the spring of 1930, Dalí­ and Gala bought a small fishing hut in Port Lligat, a sparsely populated fishing community. It's a short distance along the coast from Cadaques, the fishing village-turned-artists-retreat on the Bay of Roses where Dalí­ had summered for many years with his family.

Even today, it is possible to sit with a glass of sangria and a plate of tapas on the beachfront at Cadaques and, if you shape your fingers into a rectangular viewfinder, you can see the exact reality of Salvador Dalí­'s painting called Port Alguer. The scene is almost unchanged since he painted it in 1924.

The house in Port Lligat is a record of Dalí­ and Gala's time together and a window into the artist's working life. It opened to the public in 1997 as the Casa-Museu Salvador Dalí­ and has since become a popular destination for Dalí­ aficionados.

The whitewashed and drystone walls of the museum sparkle against the backdrop of blue skies and clear light that Dalí­ painted so often. The golden rocks of the coastline were eerily familiar. Small fishing boats, red, blue and green, lay on the sliver of beach, just as they did during the years when Dalí­ was here.

I found it a wild and wonderful house, with unexpected and amusing details in every corner. Visitors are greeted immediately upon entering by a stuffed bear holding a tray, a gift from the British writer Edward James to Gala. There are several child-sized chairs that Dalí­ collected, oddly dressed mannequins and four stuffed swans, Dalí­'s pets that he had stuffed when they died. The walls of Gala's dressing room are completely covered with photographs of the Dalí­'s posing with the celebrities who visited them.

While the pair led a very public life, a tour of their home reveals a desire for privacy as well. The rooms are touchingly personal. I felt almost like an intruder visiting their bedroom, with its royal blue and red canopies over their beds, their slippers set out and their bathrobes hanging on hooks.

The studio reveals much about how Dalí­ worked. He was an obsessive craftsman, working for ten to 12 hours a day, week after week.  His chair, with his long brushes and paints beside it, is in the exact position from which he used to work. Port Lligat glimmers in the sun beyond his window.

Sitting on the terrace of the Hotel Aigua Blave after my visit to Dalí­ and Gala's home, and still under the spell of the surrealist, I enjoyed a dish of suquet, a hearty fisherman's stew made from fish, tomato, garlic and potatoes with a chilled glass of the local cava, a favourite of Dalí­. As the setting sun coloured the cliffs, I felt I could understand why this place drew the pair back, no matter how far they travelled.

The next point on the triangle is Gala's Castle in Pubol, 80 kilometres from Port Lligat, a gift from Dali to his wife in 1970. Gala was reputed to have a voracious sexual appetite well into her eighties, and thus the necessity for the castle. Close enough to their house in Port Lligat that Dalí­ could visit, (only, he insisted, when he received a written invitation) but far enough away that Gala could entertain her lovers in discrete privacy.

The castle at Pubol is a satisfying visit even without the scandalous nature of its onetime owners, but Dalí­'s touches make it unique. From the outside it is a well-restored medieval building that dates from the 11th century. There are three floors arranged around a narrow inner courtyard. Inside, each room is decorated with paintings, drawings and artifacts that Dalí­ installed.

It was only when I found the display of Gala's “gala” dresses that I realized what a tiny woman she was. The gowns, flamboyant and expensive, designed by Chanel (a great friend), Dior, Cardin, and some designed by Dalí­ himself, suggest an almost childishly small figure. In the garden, Dalí­'s long-legged elephants rise above the hedges, and the pool is surrounded by busts of Richard Wagner, one of Dalí­'s favourite composers.

Gala was buried in the crypt of the castle when she died in 1982 at the age of 88. That night I stayed at the Mas Salvi, a restored 17th century farmhouse, once the country home of Formula One driver Paco Josa, and now a luxury hotel in the countryside just outside the medieval city of Pals. The dining room is superb and a favourite of local diners and weekenders from Barcelona. Young Chef Fernando Andreu has adopted some of the influence of Ferran Adria, the famous Spanish chef at El Bulli in nearby Roses, who champions molecular gastronomy, but Chef Fernando uses his own knowledge of seasonal produce and fresh local fish and seafood to produce beautiful dishes.

If the timing is right, enjoy some deep fried calcots, the lovely wild onions the Spanish are crazy for, and that are only available for a few brief weeks in the spring. Dalí­ had a special weakness for calcots. From the simplicity of one perfect fat Spanish olive stuffed with cream of anchovy, beside a tomato-filled puff topped with a curl of local jambon, to the complexity of artichokes, wild mushrooms and anemones with Cadaques cod served en papillote, accompanied by an Adria- inspired celery foam, every dish is fresh and exquisitely detailed. The cellar houses an amazing selection of excellent local wines.

The final point of the triangle is 40 kilometres from Pubol, in Figueres. The Dalí­ Museum is the second most visited museum in Spain, next only to the Prado in Madrid. The outside of the building has pink walls adorned with little sculptures of the local bread, and large smooth eggs on the roof.

In the centre of the inner courtyard is his installation piece, Rainy Cadillac, and in the 22 rooms of the museum are some of his most impressive works.

Don't take a guided tour of this museum and don't try to follow a preconceived route.  Dalí­ wanted you to discover and engage the art organically. That is the best way to discover works like the May West room, or the Palace of the Wind room. When I was there, the museum was very crowded, and the corridors are narrow. I'd recommend going early in the day, or on one of the evenings when the museum stays open late. Dalí­ is buried in a crypt in the museum.

The Dalí­-Gala Triangle could conceivably be covered in one day, but that would be a crime. Each site merits at least a day, and for truly committed art fans, repeated visits.  They are close enough together that the driving involved is minimal.

Dalí­, with his enigmatic female svengali at his side, lived a deliciously scandalous life, and left an indelible mark on 20th century art and culture. A visit to the Dalí­-Gala Triangle gives a glimpse into how this genius was forged and reveals the fierce beauty of the Costa Brava.