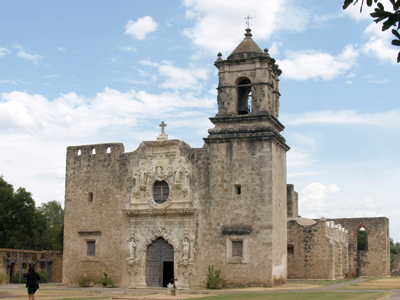 Bless the city that can do more than one thing, and do it well. San Antonio, Texas ““ the state's second largest city ““ fits that bill. Most people come to the city for the Alamo (it's the state's most-visited attraction) and the picturesque River Walk, the 25-kilometre waterside footpath with shops, restaurants and quiet nooks that can be explored by strolling or aboard a riverboat. The River Walk may be the golden thread that knits together the downtown core but San Antonio satisfies on many fronts: it satiates the craving for history, fills the belly with a happening culinary scene, and calms the soul for those seeking an arts and culture moment. Explore San Antonio; three ways are better than one.

AN HISTORICAL TREK
It is impossible to ignore the Alamo, the shrine of Texas liberty. The photogenic Spanish Colonial building sits in the heart of downtown as well as on the front of t-shirts, mugs and ball caps everywhere. For Texans, the sentiment of the Battle of the Alamo cannot be overstated. “The bravery it took to stay in here against overwhelming odds is why we remember the Alamo,” says National Park Service guide Martin Vasquez, a self-professed Alamo enthusiast.

In 1836 a revolution of just 189 men ““ led by David Crockett, Jim Bowie and William Travis ““ held their ground for 13 days before succumbing to 3,000 troops under the command of Santa Anna, a Mexican general who considered himself the Napoleon of the West. According to legend, Travis drew a line in the sand with his sword and asked the men to step across to join him in fight for freedom that would mean certain death. All but one joined the cause. What remains of the original complex are the mission chapel and a part of the Long Barrack, but the displays are artefact-rich, in part with 250 pieces donated by musician Phil Collins, a dedicated Alamo enthusiast. Displayed with reverence are Crockett's vest and a lock of his hair, a genuine Bowie knife and a Spanish cannon used in the battle.

In 2015, five San Antonio Missions ““ including the Alamo ““ were named a UNESCO Word Heritage Site, in recognition of a history that resonates worldwide. Park Rangers like Anna Martinez-Amos at Mission San José (the largest of the five missions) lead walking tours to explain the Spanish Colonial impact of this part of the world.

“These missions first served as waystations for travellers coming from the interior of New Spain ““ what today is Mexico ““ on their way to east Texas. The idea was to establish missions here to build up a community, to teach the indigenous people the Spanish way of life for the purpose of becoming Spanish citizens. Those Spanish colonies would claim this land for Spain.”

For the indigenous Coahuiltecans, the move behind the massive, protective stone walls of the Spanish missions entailed a complete shift in lifestyle from nomadic hunter-gatherers to embracing skill sets needed in a stationary community.

“A mission is like a vocational school,” explains Martinez-Amos, pausing in front of the tall limestone church dominating the complex. “It's all about learning the Spanish way of life. To be Spanish was to be a farmer, rancher, carpenter, blacksmith or weaver. And of course, to be Spanish was to be Catholic. The church was the centre of life here at the missions.”

FOOD & DRINK, TEXAS STYLE
This is not a place where one goes hungry.

A campus of the Culinary Institute of America (one of three in North America) anchors the happening Pearl district. The hub of the CIA is a campus to full-time students but visitors can watch demonstrations, take hands-on classes or enrol in multi-day culinary boot camps. For a colourful and flavour-filled experience, foodies head for the weekend CIA operated taco stand, on campus and right next to San Antonio's largest local farmers' market.

Located in the industrial complex of the former 19th Century Pearl Brewery, Pearl is shaping up to be San Antonio's epicentre of retail and culinary ventures. In the years before Prohibition, the city was home to a dozen breweries but when the law clamped down the brewmasters went south to Mexico, establishing breweries like Dos Equis. Small craft breweries are popping up again, revitalizing a longstanding San Antonio brewing tradition.

No food trip to Texas is complete without barbecue. The young Rattray brothers operate The Granary 'Cue & Brew in the old cooper's house at Pearl. Tender meats are wood-smoked on site, pickles and buttermilk bread are housemade, and there is delicious house-brewed root beer made from liquorice, cherry, sarsaparilla, sassafras and birch bark roots. An on-site seven-barrel microbrewery pumps out four different brews at any one time, including a popular Brown Ale and IPA.

Food and drink are serious business in this city and restaurateurs are always incorporating new food trends, staying on the cutting edge of their trade. At Bohanan's, a special occasion cocktail lounge with a distinct Old World Feel ““ picture dark wood panelling, soft jazz and a mixologist behind the bar who really knows handcrafted cocktails ““ they helped spearhead the annual San Antonio Cocktail Conference (January). Fodor's named it one of the three best cocktail festivals in the country. For four days, tastings, special events and small cocktail classes led by some of the country's best instructors are held in some of the city's most historic venues.

They serve food and drink 24/7 at the colourful Mi Tierra in downtown's Mexican Market district. If you're looking for Tex-Mex and traditional Mexican recipes served with pizzazz and celebration, this is your place. What began as a humble family-owned eatery in 1941 has expanded to fill an entire city block. Diners eat under a canopy of pií±atas, flags and twinkling lights ““ dishes like moles, chile relleno and goat cabrito are still handmade using original family recipes.

ARTS & CULTURE
The great American author John Steinbeck captured the quirky side of the Lone Star state when he said, “Texas is a state of mind, but I think it is more than that. It is a mystique closely approximating a religion.”

Translate this fervour into a “we can achieve anything” state of mind and you've pegged San Antonio. All across the city centre, the old and historic is embraced. Spanish Colonial, Neo-Gothic Revival and Art Deco buildings are repurposed into funky eateries, hip bars, independent shops, museums and galleries. Many of them sit on, or near, the banks of the San Antonio River, the twisty ribbon of water once the lifeblood for early settlers in an unforgiving desert.

Consider the much-lauded San Antonio Museum of Art. As part of the city's urban renewal movement, the old Lone Star Brewery was renovated and repurposed into a new home for an eclectic collection that includes a colour-splashed ceiling of Dale Chihuly glassworks, world-class specimens of Asian art, Egyptian, Roman and Greek antiquities, Latin American art and the largest collection of 17th and 18th Century Irish silver outside of Ireland.
Pieces like a Central American silver chocolate pot ““ part of the display of Irish silver ““ prove how some things remain the same, despite the passage of time. Globalization has been around for hundreds of years, but at a much slower pace.

In the heart of the city's River Walk district, the Briscoe Western Art Museum is one of San Antonio's newer museums in one of its older buildings. The Art Deco/Neo-Classical building once the city's first public library was painstakingly refurbished into a space dedicated to art of the American West. Multi-media stations bump up the experience of displays like an authentic Wells Fargo stagecoach, the Mexican revolutionary general Pancho Villa's saddle and a sword once brandished about by Santa Anna, the megalomaniac leader of the Mexican forces at the Battle of the Alamo.

On a peaceful hilltop overlooking the city, the San Antonio Botanical Garden is an oasis of formal gardens, a soaring glass conservatory and trails through areas showcasing native vegetation. Drought resistant varieties like rosemary and cherry sage fill planters in the Braille-signed Sensory Garden. A fence of hand-tied bamboo encloses 30 classic elements of an exquisite Japanese garden including a traditional tea ceremony house constructed without nails. Tall Japanese maples shade two small mounds, symbolizing Japan's Mt. Fuji and the Texas Hill Country. Walking trails are a respite from the city's busyness, meandering through three of Texas' ecosystems ““ the Hill Country, Pinewoods and Plains.

If you go
Getting there
Air Canada (aircanada.com), Delta (delta.com)
and American Airlines (aa.com) fly from Toronto
into San Antonio.

Where to stay
The Westin Riverwalk (westin.com/riverwalk) is an upscale property located within walking distance of restaurants, shops, museums and historic sites like the Alamo. Spacious Junior Suites overlook the River Walk.