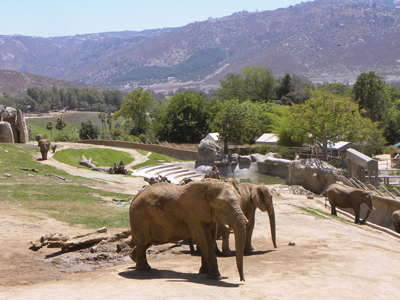 It's a stunning end to a picture-perfect day. A Southwest jet casts a shadow over Balboa Park, the sun slips in the sky and far below the aerial car, in which I am a passenger, a silverback gorilla ambles around his outdoor quarters.

The sense of satisfaction I have at this moment cannot be transcribed to paper. It's a memory to be forever tucked away in my mind. I have accomplished something on my to-do list: a trip to the San Diego Zoo.

I can't recall how the zoo became one of the must-dos in my life. Perhaps it's my love of animals (or California) that led me to this brilliant day in August. The fact, too, that I had just finished waging a war against breast cancer made this trip all the more pressing and memorable. But here I am, high above the shimmering treetops, enjoying a ride on the zoo's Skyfari with my husband of 29 years.

Like everything else at the world-renowned San Diego Zoo, the Skyfari is incredible. It offers breathtaking views of Balboa Park and the zoo's phenomenal plant and animal collection.

The gorillas, located in an area known as the Lost Forest, were what I hoped to see as soon as we arrived at the park. Like a child on Christmas morning, I was anxious to make my way to their enclosure. There is something incredibly moving about watching these amazing creatures interact with each other. Their luminous dark eyes, wonderful expressions and their likeness to us kept me mesmerized.

But my mad dash to the Lost Forest had to wait until later that warm morning. My husband had signed us up for a special Inside Look Tour, where we enjoyed a two-hour trip around the zoo on a golf cart. It was during this time, I fed a Red River Hog, got up close and personal with a sleeping koala bear, took a sneak peek at a baby hippo and watched as a panda munched on bamboo shoots while gently swaying in his hammock. In addition to overusing the battery in the camera, I was busy making mental snapshots at every turn.

The zoo offers various special tours and animal interactions. It is suggested that visitors investigate and sign up for these additional experiences prior to heading to the zoo. It is well worth ponying up extra cash to familiarize yourself with the variety of animals and the layout of the facility.

The San Diego Zoo's programs are far reaching and its wildlife conservancy is global and enviable. Visit the facility's website (sandiegozoo.com) and you can see why the zoo is a leader in this area. From restoring nature, to preventing disease to educating people of all ages about the plight of animals and their habitat, the zoo is keen to ensure that its human visitors become well versed in conservation. It's an interactive classroom for children and adults.

We learned about the zoo's highly successful involvement in restoring some hope for the California condors. By the 1980s just 22 of these imposing birds were left. Thanks to the destruction of their habitat and poisoning, among other things, the condor was slipping into oblivion. The zoo's global California condor program succeeded in hatching 165 chicks and releasing 80 birds into the wild, according to the zoo's website. The numbers were discussed with great pride by the zookeeper on our tour.

In addition to the gorillas, I couldn't wait to witness the giant pandas in action. These wonderful endearing creatures seemed to pose for cameras as park visitors snapped at their every move. The panda viewing area and exhibit afforded great access to these beguiling animals.

Just prior to leaving for California, my husband  and I learned of the San Diego's Zoo Safari Park located in Escondido, about an hour's drive north of its sister property. We decided to make it part of our trip and I am thankful we did.

The scenery was breathtaking, the variety of animals inspiring and the layout incredibly interesting. From an African Outpost to a Nairobi Village to the Elephant Valley (my favourite), the Safari Park was worth every penny. The park gives visitors a chance to walk on the wild side and for the briefest of times you forget you are in bustling California.
Comfortable walking shoes and loose clothing are a must when taking in either park. I quickly discovered that one bottle of water was not going to get me from the Tiger Territory to the Gorilla Forest. Yes, more gorillas. I couldn't get my fill of these gentle giants.

As we wind our way to the primate habitat, I see a woman, obviously in the throes of chemotherapy, dabbing tears from her eyes as she watched a new mother gorilla cradle her baby. The male was born at the safari park on June 17, 2011. Animals, especially ones as majestic as these primates, reach your soul in the most unexpected ways.
Like the zoo, the safari park offers behind-the-scenes tours and wildlife experiences. The Africa Tram Safari allows visitors a chance to rest their feet as they take a guided tour around some of the park's field exhibits. For those seeking a bit of adventure, you can get an overview of the park by taking a zip line some 160 feet above the ground that is dotted with the wonders of African wildlife.

Our short time in San Diego and at these two parks ends far too soon. We've already begun planning our return trip.

Fast Facts
The zoo, located adjacent to downtown San Diego in Balboa Park, is 100 acres in size and houses more than 4,000 animals comprised of more than 800 species from the forests and jungles of the world. It is viewed in several ways, first and foremost by walking along pathways, into aviaries, and through bioclimatic zones.

The Safari Park is located approximately 35 miles northeast of the zoo, in Escondido, California. The Park spans 1,800 acres (more than half of which has been set aside as protected native species habitat) and cares for more than 3,000 animals comprising more than 400 species (not including the species that inhabit the protected California native habitat which is a part of the Park). The Park showcases herd-style animals from the plains and savannahs of Africa and Asia that normally roam together in the wild, such as rhinos, giraffes, and antelope.