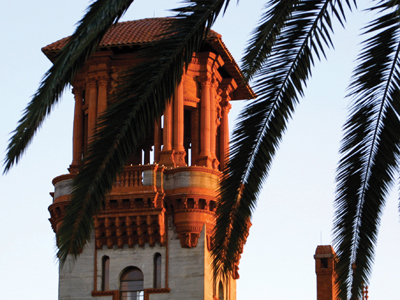 Stepping off the plane in the northern part of Florida state I wasn't sure what to expect. My destination on this visit to the sunshine state is St. Augustine, population about 13,000 and about an hour's drive south of Jacksonville.

Located on the northeast coast of Florida, St. Augustine is closer to the Georgia state line than the infamous streets of South Beach. While it doesn't share the notoriety of Ocean Drive, it boasts a rich history that dates to the first Spaniard stepping off his ship and laying claim to the lush land of “La Florida.”

The entire state will raise a glass to toast its birthday as Florida celebrates a major milestone in 2013. This year will mark the 500th anniversary of Spanish explorer Ponce de Leon's landing on the state's east coast, somewhere near where St. Augustine stands today. A year of celebrations and special events are planned throughout the state, and St. Augustine will play a major role.

A bit of a history lesson
The city is the oldest in the United States, officially the oldest continuous European settlement in the country, and will itself soon celebrate its 450th birthday. The settlement here was founded in 1565 as a way to protect the investments of Spain in the New World.

The Spanish Admiral Don Pedro Menendez de Aviles was sent by King Phillip II to explore and colonize what is now the state of Florida, instructing him to rid the area of pirates and non-Spanish settlers. Menendez de Aviles arrived on the coast on the Feast Day of St. Augustine with 600 soldiers and settlers. He named the village St. Augustine in honour of the day and its namesake saint.

It's a city with many a tale to tell. From the Spanish and the English, and the Native inhabitants they met, to more modern day entrepreneurs, set out to make their mark on the world.

As the American Civil War was coming to an end in 1865, the prosperous area drew land developers to Florida for the first time, spawning the beginning of the tourist industry.

One of the men of dreams to arrive was Henry Flagler. He was enticed by the city's warm climate and in 1885 started to build his version of a winter resort and playground for wealthy Northerners to visit during their summer vacations. Flagler was a co-founder of the Standard Oil Company along with John D. Rockefeller, and put his bank accounts to work building his vision.

Construction began on the 540-room Hotel Ponce de Leon and it opened in January 1888. The grand building featured ornate hand-carved wood, panels of imported marble, elaborate murals, and Tiffany stained glass windows. The hotel was an immediate success with guests being required to book the entire “season” to secure their suites, regardless of the amount of time they wished to stay at the hotel. A stay at the hotel was an extravagant holiday, with season rates at the time being up to $250,000 in today's funds.

Today the storied original Hotel Ponce de Leon is home to the campus of Flagler College, housing students and all their daily requirements, along with some very prestigious historical elements and preserved spaces. A tour is well worth the time to sneak a peek into the vast spaces that once played host to the elite for their entertainments. It is a working college campus, and it's an intriguing play of new against old with students grabbing lunch in the dining hall and it's soaring architectural elements along with some of the original dining room chairs.

Where to Stay
We arrive in St. Augustine mid-afternoon and make our way directly to the historic Casa Monica Hotel to check in. It seems like any other typical small city, until you enter the old city. Quaint streets lined with shops and galleries extend from the central square; lined with live oaks, Spanish moss dripping from their broad branches.

The Casa Monica is tucked into the centre of the old city along a pretty stretch of fashion boutiques, gourmet food shops and art galleries. The entrance is subtle, with guests now walking through the cobblestone alley that once was the drive for carriages and automobiles, to the guest entry and a waiting valet.

This property was initially developed as competition to Hotel Ponce de Leon ““ just across the street ““ by architect Franklin W. Smith. The Casa Monica Hotel opened in 1888 with just three guests, and was sold to Flagler a few months later. Flagler renamed the property Hotel Cordova (a slightly less grand place to stay than his jewel Hotel Ponce de Leon) and it thrived, along with his third, the Hotel Alcazar.

The building has undergone several uses in its lifespan, and was lovingly restored to operate as a hotel once more by The Kessler Group. The large lobby was restored to its original 1888 grandeur prior to its reopening in 1999.

Once inside the Casa Monica of today, it's all sumptuous materials, rich colours and fine detail in carvings and ornate decoration. The rooms have been renovated to be very comfortable and functional guestrooms with all the modern requirements of a traveller, with a touch of the rich baroque style the hotel was originally fitted with. It's an impressive site to walk up to ““ much like walking up to your own Spanish castle.

Where to Dine
The charm of the old city of St.Augustine continues to the food scene. Strolling through town there is another charming cafe or pretty bistro on every street, along with plenty of pubs and bars to spend the latter hours of the evening. The brillant thing about St. Augustine is that you can walk everywhere. From the Casa Monica's central location, it's a mere few minutes stroll ““ even in sky-high heels ““ to the evening's meal.

Check out Bistro de Leon for classic French fare prepared by Chef Jean Stephane Poinard, a fifth generation chef from Lyon, France. Sitting in this little bistro, polishing off a glass of Beaujolais, looking out across the city square, it's easy to imagine you might be in a quaint European village, save for the occassional palm tree.

Flagler College
Check out the site for information about tours of the college campus, the former Hotel Ponce de Leon.
flagler.edu