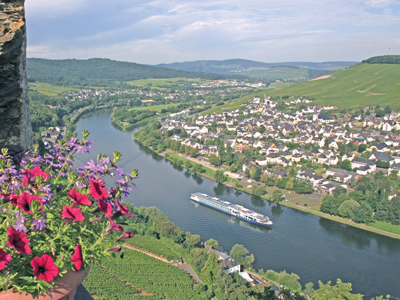 Gamblers know how a man can sit for almost 24 hours at cards, without looking right, or left ““ or so wrote Fyodor Dostoevsky in The Gambler. It was the roulette table at the Casino Wiesbaden that seduced the 19th-century Russian novelist, emptying his bank account but eventually filling his pages with the prose of a novel.

For centuries, one of Germany's oldest casinos has been a magnet for those with loose change jingling in their pockets. I am taking no chances: my euros are locked up tight in a stateroom on the Avalon Tranquility II, safely parallel parked at the city docks. Roadways aplenty snake alongside Germany's Romantic Rhine, but it seems that to truly understand the mystical pull of the Rhine River, it's best to actually travel on the river. Euros tucked away, suitcase unpacked; for four days, Tranquility II is home.

Wiesbaden counts thermal springs, classical architecture, Henkell sparkling wine and five-star spa resorts among its pedigree. Over the centuries, aristocrats and the intellectual elite would congregate here ““ a town dominated by gardens and parklands, hot springs and steep terraces where the Rhine reflects warmth and light onto the region's celebrated vineyards. Dostoevsky lost his shirt in Wiesbaden (but gained a novel). Empress Elisabeth of Austria visited the riverside spa town, as well as the composers Richard Wagner and Johannes Brahms, and the Brothers Grimm, masters of the German fairy tale. Lord Byron and Victor Hugo were obsessed with the flowing waters ““ creating works of art that captured the Rhine in all its glory.

Local guide Marion Schoenherr has seen visitors drawn by a myriad of temptations. Her takeaway lesson: “You experience Wiesbaden with all your senses.”

The sulphurous hot springs soothe and relax knotted muscles ““ something the Romans discovered more than 2,000 years ago when they first dipped into the therapeutic waters. A glass of local Riesling from the Rheingau, one of Germany's 13 major wine regions, is fruity and spicy in aroma. In the old centre of Wiesbaden, tastebuds find heaven at traditional coffee houses that serve squares of Blechkuchen, a sweet sheet cake topped with plums and a buttery crumble.

I hadn't thought of river cruising as a lavish experience of the senses, but it is. It's an intimate, gentle way to travel, with a sense of style and a pace that allows me to deeply inhale the scents of sycamore trees, meadow flowers, those calorie-laden coffee houses and poetry. Yes, in this part of the world, even poetry has a smell. Onboard, there is a Goldilocks point of stasis ““ not too big, not too small ““ when craving solitude there's always enough elbowroom; mealtimes and shore trips satisfy the need for companionship.

The Rhine is the longest river in Germany and, for millennia, a route favoured by explorers and traders. From its headwaters in the Swiss Alps to its outpouring into the North Sea, the river passes through four countries: Switzerland, Germany, France and The Netherlands. The ancient Romans considered it the northern boundary of the civilized world. During a time known as the Germanic Heroic Age, there were tales of golden treasure and the slaying of dragons along the riverbanks. For more than half a century, a large portion of the Rhine constituted a contentious border between France and Germany, a sort of nationhood ping-pong that saw land ownership bounce back and forth through war and annexation.

I am surprised at the amount of industrial traffic along the river. We share the shipping lanes with long barges loaded with heavy containers and the occasional small tugboat. The shoreline is marked with factories, cement works and dockyards. Small towns exist, but for long stretches they are set far back from the shoreline, safely on high, dry ground above the wide floodplain. While it is not the castles and the vineyards of the “Romantic Rhine,” this busyness of everyday life is a part of what has made this river a force to be reckoned with. Long before there were high-speed autobahns, the river linked trade routes of the Mediterranean and the north. Many of the Rhine's castles were massive tollbooths constructed by feudal lords, taxing for safe passage through their fiefdom.

The stretch know as the Upper Middle Rhine is where most of the eye candy lines the banks of the river. A 65-kilometre stretch through the erosion-carved Rhine Gorge is listed as a UNESCO World Heritage Site. There are slopes blanketed with vineyards, small villages with scores of half-timbered homes, and dozens of castles and fortresses from the Middle Ages. I find the best view from the top sundeck, where I sit quietly and try to etch my brain with the 360-degree panorama.

Downriver, at Koblenz, we dock on the Moselle River, a tributary of the Rhine that feeds the mother river with water from the Vosges Mountains to the west.

“Nowadays the Moselle is a chain of 14 lakes,” explains guide Elmar Bretz. “But the region is known for its steep vineyards, some dating back to Roman times. When the Romans came to the area they already had a lot of knowledge about viticulture. The built terraced walls positioned to face the sun all day, planted vines, and then covered the soil with slate to keep it moist and warm. Some of these terraced vineyards have been here for thousands of years.”

Through the Upper Middle Rhine, the gorge creates a special microclimate well suited for growing grapes. Along the Rhine and Moselle Rivers, wine villages specialize in top quality varietals: Riesling, Pinot Gris, Pinot Noir. Some of the terraces are as steep as a roof pitch ““ in the winter months the workers use alpine climbing equipment to tackle the off-season maintenance. In autumn the area is a beehive of activity, when migrant workers arrive to pick grapes and one wine festival after another rolls out the red carpet to celebrate another successful harvest.

You can do, at most, only one thing on a river cruise in one day, even though an activity should take only an hour. It's the nature of the cruise to be on the move: bedroom, living room, dining room are in leisurely, but constant, motion. The half-day shore excursion to the castle Burg Eltz near Koblenz is an irresistible opportunity to poke around in the one per cent's living space. Perhaps not an opportunity to rustle through their bureau drawers, but as close to it as one can hope. Built in the 12th century, the castle has been privately owned by the noble Eltz family for 33 generations. It's what is explained to me as “a living castle,” built by the family forefathers as a place of solitude. In 1689 French troops under Louis XIV stormed through the valley, razing much in their path but sparing Burg Eltz. Now it is an Eltz family countryside retreat, with a large part open to public tours.

There are 80 rooms and 40 fireplaces in the castle. Most of the building is original, including many of the furnishings, Flemish tapestries and artwork. Inside, the stone walls are hung with 14th-century bows and arrows, knight's armour, red and gold striped jousting poles, swords, metal breastplates and weaponry of all shapes and sizes. It was a busy time for battles, the Middle Ages.

The castle was attacked only once. It was under siege for five years, catapults were fired but they never found their target.

Near misses and point blank hits. Over the centuries these rivers have seen it all, and survived. Two thousand years ago, when the Romans were travelling the Rhine, they decided it should be a “male” river, because it was steadfast and true, always reliable. These are the kinds of things a ship's captain would be able to discern. As a passenger I only feel the mystical pull of the river. I can't attach a gender to that. It just is.