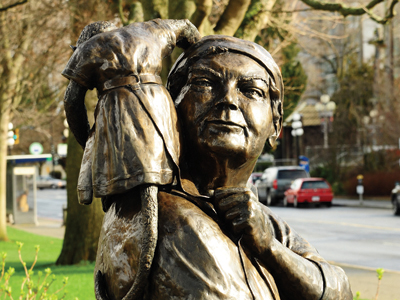 It is a funny old town. Simply gorgeous in the sunshine and mystical in the rain. Tourists love it, so do insiders ““ but for different reasons. Visitors do the grand tour first with High Tea at the Empress, then a wander around the waterfront shopping for tourist trinkets, but there is a lot more to this town that professes to be almost more English than England. It's a warren of interesting shops, delicious food emporiums, and a haven for even more interesting artists.

Victoria has dozens of hidden corners that don't receive much media exposure. One of the best is Fisherman's Wharf just west of the downtown core. You can tell how good it is from the number of locals who visit its docks to eat fresh seafood or bring their kids so they can feed the resident seals.

Fisherman's Wharf is a colourful, mixed seaside community. There are whale watching tour operators, restaurants, kayak rentals, coffee shops and floating homes. It's simply a great place to sit in the sunshine for lunch.

The floating homes are reminiscent of Sausalito's houseboats. Painted with an almost psychedelic palette, the homes are substantial, multi-storied and whimsically decorated. Residents are tolerant of visitors as long as tourists respect their privacy.

The seals are patient. They know if they wait long enough someone will feed them. If no one does, you can. The Fish Store sells seal food ““ plates of unusable fish bits. Not aggressive, the seal will leap straight up out of the water to catch a piece of fish on the fly, but they don't bite people. Even the gulls get in on the act trying to beat the seals to a meal. On Saturday mornings, dozens of kids line the wharf to scream with delight as the grey and black torpedoes almost leap onto the docks. It's one of the few urban places you can get so close to sea mammals like this.

Fisherman's Wharf was a real fishing port until the 1990s with all the rowdiness that comes with commercial fishermen. Fishing boats, and there are still dozens that tie up here, primarily went after salmon and herring following WWII. With the decline of the salmon fishery they changed over to Albacore tuna, which is pursued sometimes a thousand miles out to sea. Other fishermen catch crabs and prawns.

If you have a rental unit that has a kitchen, this is the place to come for fresh seafood. Don't miss the sweet, deep-cupped West Coast oysters like Kusshi and Royal Miyagi.

During the 1990s live-aboards inhabiting everything from Chinese junks to triple-hulled trimarans moved into this part of Victoria's harbour to squat for as long as the city would put up with them. They set the trend for the residents who followed over the past two decades.  While the fishermen are still there, the squatters were asked to move on and the more elegant, if light-hearted, floating homes replaced them.

At the corner of Fisgard and Government Streets, 300 metres uphill from the central harbour, the Gate of Harmonious Interest rises above Chinatown's main thoroughfare.

Victoria's Chinatown was founded in 1858 making it the oldest in Canada and it still has a slightly mysterious feel to it.

British Columbia wasn't much of anything in 1858. Then word leaked out gold had been found on the Fraser River (the river's mouth lies a short distance across Georgia Strait on the mainland). With the gold fields in California playing out, the miners ““ including a large contingent from China's Guangdong province ““ began heading north to the new source of wealth.

Victoria was the largest city in B.C. and capital of the province. It was also a bustling port with ocean-going ships from around the world calling in to drop immigrants off before loading raw resources destined for factories and mills
in England.

The gold fields proved to be the making of some miners, but for many they were another disappointment. Those Chinese immigrants who saw the writing on the wall began putting down roots and a community of restaurants, food
markets and other more picaresque delights quickly sprang up.

Remnants, like Fan Tan Alley, hang on in Chinatown and you can't get a feel for what it must have been like in its heyday.

Fan Tan Alley is a narrow aperture between the brick buildings leading explorers from Fisgard through to Pandora Avenue. You have to look carefully for the Alley's sign.

The Alley was once home to brothels, opium dens and the gambling houses that gave it its name. Fan-tan is a complex game played by the first Chinese miners and the immigrants who followed them.

Modern-day Fan Tan Alley is now more populated by small boutiques than dens of iniquity. There are still vestiges of this secretive street if you look carefully. One of the best ways to really get a feel for both Chinatown and Fan Tan Alley is to take one of Discover The Past's walking tours.

Lunch in Chinatown is a great option. Venerable restaurants like Shanghai City and Don Mee Seafood now rub up against the city's ubiquitous coffee shops. Asian dining rooms offer fixed menus of familiar Chinese dishes, but if you're adventurous, they will make you a feast of traditional cuisine.

Another stop for foodies is the Victoria Public Market At The Hudson just a couple of blocks south of Chinatown on Douglas.

Relatively new, the Victoria Public Market At The Hudson is a collection of outlets set up like French indoor market. Vendors offer both ingredients to take home and light meals to eat onsite. It doesn't feel like a food court.

Further out from the city centre is the gently undulating coastline along the Strait of Juan De Fuca. This is a very pleasant hour-long drive that is easily reachable from the heart of the city. Just follow the road (Belleville) past the legislature buildings. It will change names several times before you hit Fisherman's Wharf, but you can't go wrong if you keep the water on your right hand side. It eventually becomes Dallas Road.

There are sweeping bays where you can park the car and walk along the shore. The beaches are packed with so many logs, you almost feel that Nick, along with his faithful First Nations partner Jesse Jim, will pull up in the Persephone to salvage the wayward timber.

Victoria's loveliest homes are spread out along this shore in the neighbourhoods of Ross Bay, Oak Bay and Uplands.
Backtracking to the corner of Government and Belleville Streets, visitors are met by a statue of an unlikely heroine of Canadian culture. This dumpy old woman, who was considered by many of Victoria's upstanding citizens to be something of a local “Crazy Cat Lady” during her day, was the painter who's prices are now steamrolling into the stratosphere with the likes of Sotheby's and Christie's.

Emily Carr was both a painter and writer of prodigious talent. Her book Klee Wyck won the Governor General's Award for Non-Fiction in 1941. She followed this with The Book Of Small and The House Of All Sorts among others.
Her treatment of First Nations carving and symbolism through painting launched a major interest across Canada in west coast native art.

According to author Laurie Carter, “Emily had an ambivalent relationship with her home city. She felt she wasn't kindly treated by the locals and that they viewed her and her menagerie as completely eccentric.” Carr was well known for wheeling a baby buggy, laden with her monkey Woo and assorted dogs along with her groceries for the boarding house she ran.

Carr's life was hard, but not terrible. Carter, who wrote the recent travel book Emily Carr's BC: Vancouver Island explains, “Lot's of people don't realize she was a great teacher and she supported herself for many years by teaching art to children.”

This alone should have endeared her to the locals, but after studying in France her painting style changed. Victorian art buyers loved her delicately feminine watercolours. In Europe she underwent a profound metamorphosis and upon her return she began tackling more thematically complex subjects. Her treatments didn't sit well with the locals and sales plummeted. Nonetheless she kept on making painting expeditions around the province.

After her death, peace between she and the city was made and the beautifully cast bronze statue of Carr, her monkey and dog Billie ““ Our Emily ““ by renowned sculptor Barbara Patterson now sits in a place of honour at the crossroads of Victoria's major streets ““ just across the road from the provincial legislature.

Victoria is redolent with locations important to the Carr story. A ten-minute walk past parliament buildings brings you to Emily Carr House. Where Carr was born in 1871 and it remained her home until 1906. She gave her first art classes in the home's small studio.

Around the corner at 646 Simcoe Street is Hill House, which became the The House Of All Sorts. Today it is privately owned and visitors are not permitted. Further on, down St. Andrew Street is the bright yellow cottage that belonged to Emily's sister Alice. In 1940 Emily moved in and was the last place she lived. Many of her towering masterpieces were painted here.

Often Carr would walk her dogs in Beacon Hill Park ““ another short walk away.  “If you go to the top of the hill near the centre of the park,” Carter points out, “you'll feel like you're looking at an Emily Carr painting ““ that's because you are.” Some of her earliest work was painted here.

Emily was interred in the family plot in the Ross Bay Cemetery. Her grave is a frequent stop for her fans whom leave personal mementos by her grave.

The grave is hard to find. It's location is not well-marked, but if you park on Fairfield Road (pay attention to the parking signs ““ Victoria's finest lack a sense of humour) on the north side of the graveyard, near Arnold Street. Enter the cemetery on the main path and follow it around to the right. Opposite the junction with Arnold, you'll come to an inset marker pointing toward her grave.

Her actual tombstone is as unassuming as the woman who lies beneath it. Beside the marker is a small plinth with an inscribed quote by her. The plinth is covered with personal offerings of art or artist-related materials.

From the gravesite, it's time to take a look at Carr's work. Situated on Moss Street in the shaded heart of a pleasant neighbourhood just north of the cemetery is the Art Gallery of Greater Victoria. It holds a permanent, rotating collection of Carr's work and is worth the visit.

It took time, but this funny old town has taken the funny old genius to their hearts and celebrate her with gusto as it does many other things off the beaten tourist trail.

If you go:
Discover the Past Walking Tours
These leave every Saturday morning at 10:30 from the Bright Pearl Statue at the corner of Fisgard and Government.
discoverthepast.com