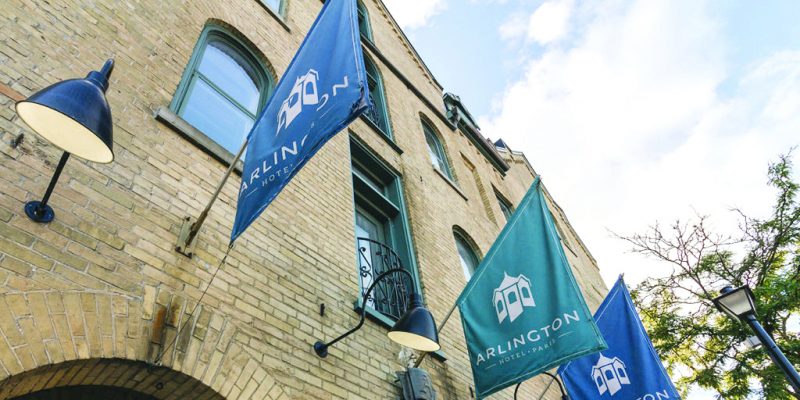 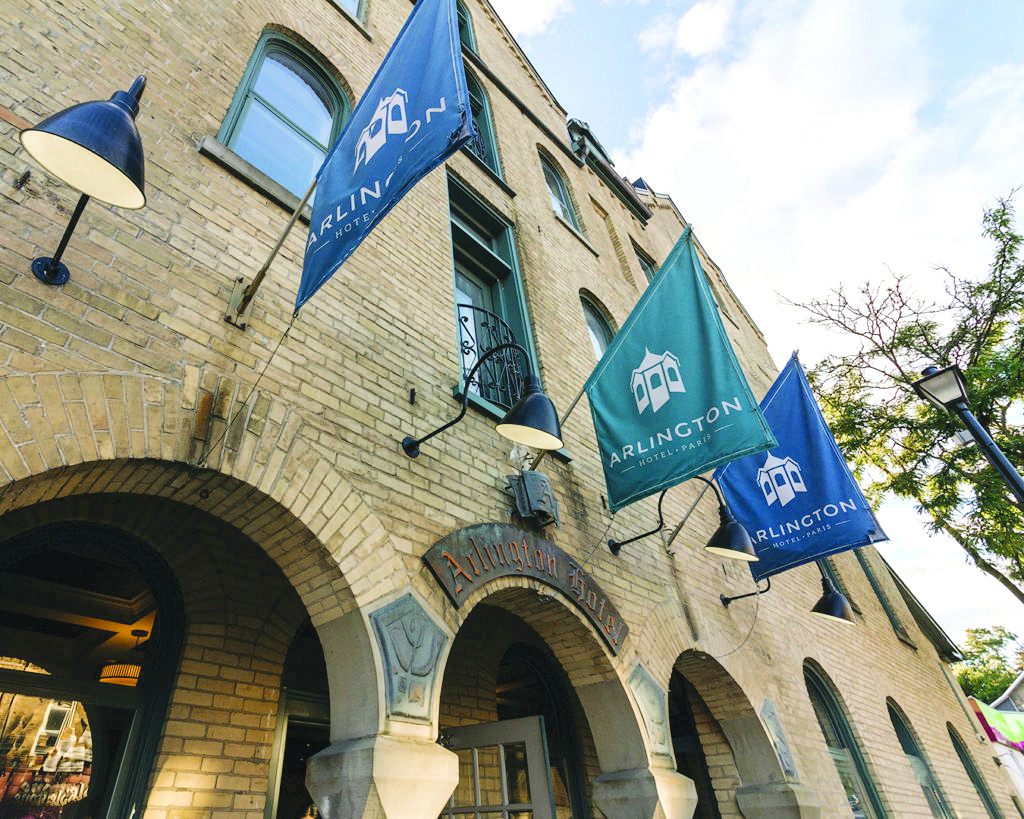 I’ve driven by Paris dozens of times, whizzing along highway 403 with little more than a glimpse at the sign as a passenger casually quips about the thrill of living so close to Paris… Ontario. Certainly, the town is famous for sharing its name with the world’s most romantic city. Our Paris, however, is so named because of the large gypsum deposits it once mined to make the building material known as plaster of Paris. Not very romantic. However, when I learned the town had a boutique hotel owned by Hamilton’s hospitality group, The Other Bird, I decided it was time to experience Paris for myself. Our Paris.

The Arlington Hotel was purchased by The Other Bird in 2016. Burlington and Hamilton foodies might know the company for its popular restaurants, specifically Burro in downtown Burlington and The Mule, Paper Crane and Odds in Hamilton. The hotel originally opened in 1851 and, today, it maintains the charm, simplicity and elegance of that era. The front reception desk is steps from the front door in a lobby that is small yet sophisticated and flanked by two doorways leading into a restaurant on the left, and a bar (for private receptions) on the right.

What makes The Arlington especially unique is that the décor of each suite is inspired by a celebrated author or scientific mind. Among the 24 rooms to choose from are: Sigmund Freud, Albert Einstein, Emily Dickinson, Jane Austen, Earnest Hemmingway, J.R.R. Tolkien, Lewis Carroll, Agatha Christie and Dr. Seuss. As a proud card-carrying member of the public library system, this thrilled my inner book nerd; there are few activities I love more than perusing bookshelves for the perfect read. For my one-night stay, I booked the Leonard Cohen room as a nod to my Canadian roots and the wannabe poet in me. The timing was serendipitous. Three new stamps featuring the beloved icon were introduced by Canada Post this fall (one week after my stay) and his posthumous new album, ‘Thanks for the Dance’ is released in November.

The Leonard Cohen room was simply decorated, capturing the essence of the musician and the era in which he made his mark. Books he’d written were stacked by the bed and on the coffee table; his vinyl albums leaned next to a to a turntable. Macramé hangers with tropical plants hung in the corners and artwork prominently featuring the female figure adorned the walls. The other hotel rooms were similarly decorated with artwork and furnishings that evoked the spirit and time of the person represented. It’s a nice touch of whimsy for hotel guests and great fodder for getting in touch with one’s inner creative genius (we’ve all got one in there somewhere). The rooms are designed with simplicity and elegance, remaining true to the roots of this small Ontario town.

The hotel restaurant, called Edit (an acronym for Eat. Drink. Indulge. Together.) is one of several eateries along the main strip of downtown Paris. While some of the restaurants along the street boast patios overlooking the Grand River, I preferred the atmosphere of Edit. I had high expectations for the food, too. Having previously eaten at both Burro and The Mule, I knew the high calibre of dishes that The Other Bird’s restaurants are known for.

Edit’s daily menu is scrawled in chalk across a blackboard, changing regularly to keep the dishes, and ingredients, fresh. I ordered the Caprese salad with pesto to start and fish cakes for the entrée. Both dishes were prepared with the freshest of ingredients and seasoned nicely. The highlight of the meal was definitely dessert – Chocolate Pavé. A mix between a velvety chocolate mousse and a thick chocolate bar.

The next morning, I set out for my kayaking adventure along the Grand River. I recommend a visit to Paris include an excursion with the outdoor adventures company, Grand Experiences, conveniently located across the street from The Arlington. The company offers a host of tours by kayak, canoe, raft and hiking including packages in combination with guests at the hotel.

The Grand runs through the town and is surrounded by lush Carolinian forest which is home to Canada’s most bio-diverse region. Who knew? Not me – until I was well into my two-hour kayaking tour from Paris to Brantford.

It was a sunny day with cloudy breaks as I paddled along the river, navigating relaxing portions as well as fast running currents. I got soaked through one particularly rocky section of the river – fun, yes. However, I was especially grateful for the sun to keep me from shivering.

The owner of Grand Experiences, Jamie Kent led our tour with an encyclopedic knowledge of the region. For the most part, we rowed in seclusion which I found surprising given the beautiful day and stunning surroundings. This, Kent explained, was likely related to the river’s history.

The Grand used to cause a lot of flooding for the residents of Paris and, thus, was more a source of frustration than joy for decades. Now that the river was actively managed, the flooding had virtually disappeared. Even so, many of the locals had yet to really embrace water activities on the river.

For those who would prefer to keep their feet on the ground rather than float on water, there’s the 18 km Cambridge to Paris trail. The path is leveled with fine gravel, making it ideal for cyclists, hikers and runners. I ran the trail and can attest to its natural beauty and easy terrain. If you’re looking for even less exertion, take a stroll along the main downtown street. It’s a brief walk but offers a variety of boutiques with one-of-a-kind housewares and clothing.  Be sure to visit The Wincey Mills that’s a one-minute walk off the main strip. This historic building has been repurposed to house a year-round market with local artisans, an urban style café and various fresh food vendors.

The market is a fantastic place to stop for a tasty bite if you’re craving something different than typical restaurant fare. Think fresh Buddha bowls, smoothies, grilled cheese sandwiches and freshly baked goods, as well as seafood, sausages and cheeses to take home.

My trip to Paris was a perfect mix of literary inspiration, farm-to-table dining, small town charm and outdoor adventure. If you’ve got a week’s vacation, go ahead and book a flight to France, but for a lovely getaway close to home, you’ll have a wonderful time in the Paris that’s located right here in Ontario.