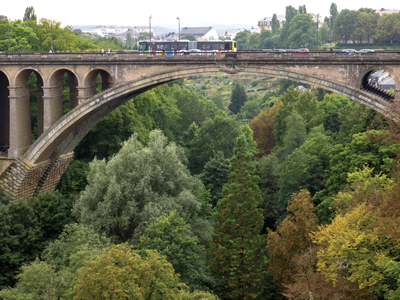 Somewhere between the immense stone towers and the genteel palace in the centre of Luxembourg City I crossed paths with a vacationing group of Franciscan monks. Clad in billowing brown robes and sandaled feet, they were listening intently as their guide pointed and gestured, peppering them with a patter of numbers and facts. I shamelessly eavesdropped. Cathedrals, chapels and abbeys. A goldmine of history for me. More of a busman's holiday for them.

Around us is one of Europe's smallest capital cities: a centre of international banking and finance with a transient workforce that shuttles back and forth from Germany, France and Belgium. In addition to their business acumen, they bring a cross-pollination of language, style and appetite. And it has always been this way in Luxembourg ““ the city has a centuries-long history of occupation, defense and annexation. Sovereignty shifted back and forth between Europe's great royal houses and continental powers.

The history of Luxembourg City, they say, is a mirror of the history of Europe. I am tracing this arc of history, by eavesdropping on my group of Franciscans and by letting my stomach lead me through the capital's sweet and savoury personalities.

“French-based cuisine with German-size portions,” points out Antoinette Schroeder, my guide on a gourmand walking tour that intertwines the food and bygone times of a city that now counts Europe's highest number of Michelin-starred restaurants per capita. “We are seeing a revival of Luxembourger cuisine as people go back to the basics. This can be quite rustic and heavy with lots of beans, potatoes and pork. But it also sits side-by-side with more refined French dishes.”

At Luxembourg's very beginning, there was a tower built to guard the crossing of two Roman roads at what is now the Grund, the UNESCO-protected old village built in the ravine. This lower part is “where Luxembourg was born” explains Antoinette. “At one time people did not want to live here because it was a working area with a prison. But now it has become an expensive, desirable place to live.”

Our first stop would be a bit of a gastronomic pilgrimage for the gaggle of monks. The Big Beer Company is in a 500-year-old warehouse where the backroom is filled with the pipes, vats and pressure valves needed to brew small batch niche beer.

“This area was first settled by monks who brewed beer. The Clausel Pils and Clausel Gezwickelt are still brewed using recipes close to the monk's original ones.”

Our tabletop is crammed with mugs of the pale pilsner served with a sampler spread of typical Luxembourger dishes: cups of warm bouneschlupp ““ a soup of potatoes, cut beans and strips of pork ““ miniature quiche Lorraine and chicken pot pie, and tureens of beans mixed with crispy bits of roasted pork.

Up to 1867, Luxembourg was a fortress town. In the year 963 a castle was built on the plateau high above the Grund. Fortifications ““ including the world-famous casemates, a capacious system of tunnels and rooms chiselled from the rock to house soldiers, horses and artillery ““ were built, dismantled and built again as the city flipped between the Burgundian, Spanish, Austrian and French empires. With its rocky plateau and strategic location, Luxembourg was nicknamed “Gibraltar of the North,” and known as one of the most impregnable cities on the continent. As various regimes took the reins, they brought with them ingredients and cooking styles that mixed and mingled, then took root.

It's a short walk along cobblestone streets to Hotel Parc Beaux-Arts, a small inn and elegant restaurant in one of the city's oldest townhomes. A tray appears, with glasses of Crémant de Luxembourg, a sparkling wine that comes from the Moselle Valley, the Grand Duchy's bewitching wine region. It's followed immediately by another tray of artistically arranged bite-size dessert samplers: raspberry tartlets, tangy lemon squares and a sensual chocolate ganache spread atop nibble-sized crispy wafers. I indulge. Even if I had room ““ and I don't ““ I wouldn't want another bite of delicious pork or quiche to mar this perfectly sweet ending to the day.

There's a magic to the city: it's small and easily walkable, unpretentious, almost Disneyesque in its tidiness, largely devoid of sightseers and . . . accessible. It's a point of pride with most Luxembourgers ““ I hear stories about rubbing shoulders with the duchess at Saturday market, just a few steps from the Grand Ducal Palace that sits smack-dab in the middle of Old Town.

For royal watchers, the most comfy seat to see the palace's changing of the guard may very well be at the Chocolate House café, on the second floor of the house immediately across the street from the royal residence. The 500-year-old building is one of the few remaining and best-preserved patrician residences in the city. On the main floor is a popular gourmet chocolate shop but upstairs is where the don't-miss action takes place: it's worth every step up the narrow staircase for an enormous slice of calorie-laden carrot cake or chocolate torte and a mug of steaming hot cocoa.

One could eat for weeks in the city's Old Town restaurants and never face the same dish twice. What may have begun as a culinary tiff ““ largely between French and German chefs ““ has settled into a comfortable and delicious détente. I find this welcome philosophy of openness at Kniddelkinnek, an Old Town eatery known for the traditional kniddel dumplings of Luxembourg. The main plate comes as advertised: hearty, filling flour dumplings smothered with salty bacon, onions and wild mushrooms. My peasant leanings are satiated, making way for the gentrification of dessert. The glass bowl that arrives is a work of art ““ filled to the brim with scoops of homemade sorbet and a rainbow of fresh blackberries, strawberries, blueberries and raspberries. And, with a nod to the delicate nature of French cuisine, a triangle of sugar-dusted waffle beside.

The next day I am on my way out of town and stopped to fill my car with gas. It's in this most unlikely of places ““ a small gas station at a busy city intersection ““ that I find a barometer of the casual elegance that is so typically Luxembourger. Inside, racks of foods to-go include fresh baked baguettes, small wheels of Camembert cheese and chilled bottles of French Champagne.

The very modern Hotel Simoncini is in the heart of the Old Town and just a few minutes walk from the Grand Duchy Palace and the market square.
hotelsimoncini.lu

By train is a convenient way to get to and from Luxembourg City. Eurail passes for train travel must be purchased before leaving North America. A free offline timetable app is now available to navigate European rail travel. Once the Rail Planner App has been downloaded no Internet connection is needed to access the timetables.
eurailtravel.com