Story and Photography By Gary Crallé

The city of Victoria, at the southern tip of Vancouver Island, is almost too cute to be true. Voted second best small city in the world by Conde Nast readers in 2017, it’s seemingly built on a human scale of pleasantries.

Indigenous cultures and modern artists have long praised the spiritual and physical beauty of the Pacific Coast. By happenstance and by design, Victoria has managed to develop into a place that’s almost Disneyesque. Pretty gardens boast Canada’s warmest climate despite ocean waters cold enough to chill the evening air at any time. Spring comes earlier here.

Downtown is quaintly modern and pleasantly walkable. Northward from the city, rolling hills, forest and rocky coasts are quickly reached by car. As expected, hiking, biking and kayaking are big in this green-conscious, fitness-oriented enclave.

Good food is part of the lifestyle too. West Coast cuisine is synonymous with fresh ingredients prepared in a range of gastronomic styles, now joined by an exploding brewpub scene. Little Vic has developed its own vibe. 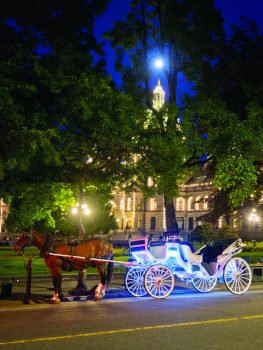 Edwardian Fairmont Empress is the undeniable Queen Mum of hotels in town. Positioned at the center of Inner Harbour, it casts a regal gaze over the downtown. Sunsets from Q Bar and Restaurant are splendid. The hotel’s recent $60 million renovation continues a tradition of timeless elegance, including afternoon ‘Tea at the Empress,’ since 1908.

Across the bay Inn at Laurel Point is a fine example of modern coastal design by Arthur Erickson.

Like its high-end colleagues, The Oak Bay Beach Hotel on the eastern edge of Victoria overlooking Juan de Fuca Strait offers all the luxuries one would expect. Ocean views are spectacular from the hotel, pool area and adjacent Victoria Golf Club. Cuisine is regional and there’s a choice between fine dining, pub or café fare. 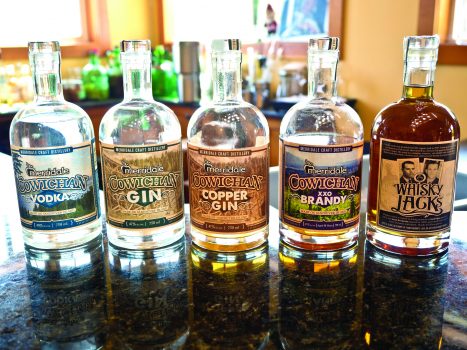 In addition to luxury hotel dining, Victoria serves up some fine independent fare.

Afternoon tea at Butchart Gardens is elegantly served in the original Butchart family residence, surrounded by flowers and greenery. The Dining Room serves local foods paired with the best BC wines. Harbour Air has a Fly ‘N’ Dine flight from downtown that includes garden admission, dinner and a limo back to town.

Less known despite its classic West Coast plantings of Garry Oaks and Japanese maples, the Abkhazi Garden and Teahouse is currently run by volunteers with the Land Conservancy of British Columbia. ‘A romantic garden setting,’ says Fodor’s.

Two restaurants on the ‘A’ list would be the Agrius and Courtney. The Courtney Room in the Magnolia Hotel is proud of its beverage list, meats and seafood, including a tasting menu. Agrius Restaurant supplements its fanatically organic ingredients with BC-favoured wines and beer plus custom breads and pastries.

Meanwhile, in nearby Cowichan Valley and Saanich Peninsula, cideries, distilleries and wineries are chalking up awards. Small group tours are offered by several companies such as Luxury Wine Tours and Cheers Cowichan.

Two hours north/northwest of Victoria at Merridale Cidery, Distillery & Eatery in Cobble Hill, brewer/distiller Rick Pipe, his lovely wife Janet and stepson Kevin are on a mission to bring the world back to sustainability. Ciders are made from heritage apples shaken from the trees, gaining awards for quality even in ancestral Britain. Try Rick’s 47-botanical gin or ciders made with hops. Future plans include a LEEDS distillery. Under the stars, if not the influence, luxury yurts are available for overnighting.

Nearby, Unsworth Vineyards is cultivating 12 acres of grapes tested expressly for the climate and soil conditions of the Cowichan Valley. The oldest grapes are 2007 Marechal Foch, which have produced the winery’s award-winning Ovation. Sipping a Prosecco-style sparkling white Charme de L’Ile, I pronounced my taste buds satisfied. Owners Tim and Colleen Turyk have long family ties in the area and share a genuine concern for agricultural sustainability. An innovative partnership with local farmers assures fresh seasonal cuisine.

Sea Cider Farm & Ciderhouse is an upscale property with panoramic views of orchards and the sea. A flight of ciders paired with artisanal meats and cheeses make a picture-perfect picnic. Complimentary tours of the orchards and cider making process are available too. 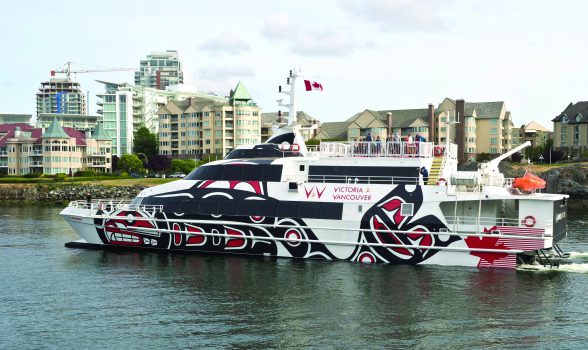 Slip into a kayak to view sea lions up close and the city skyline at your own pace. Ocean River Sports sells, rents, teaches and guides kayak tours under the banner of an eco-responsible pledge to help spread the word.

Always free and invariably entertaining is a walk along the Inner Harbour and shoreline pathway to Fishermen’s Wharf, past artists and vendors, ferries and floatplanes, patio restaurants, the château-style Empress Hotel and 1897 Parliament Buildings topped with Captain George Vancouver, Royal British Columbia Museum and adjacent Thunderbird Park totem poles, plus throngs of other people soaking up the views.

For those wishing to arrive in style, North America’s first carbon-neutral airline, Harbour Air Seaplanes, has constant flights from the mainland. Deplane at the Inner Harbour airport terminal with its eco-friendly roof supporting 50 solar panels and a colony of 10,000 honey bees. Buy their honey in the coffee shop and step into downtown.

Seaborne arrivals have two choices. BC Ferries offers daily direct service from Vancouver (actually, Taswassen, just south of the city). The modern fleet carries passengers and vehicles year-round among the Gulf Islands. Scanning the horizon on a sunny day it’s easy enough to immerse oneself in an Alex Colville print. Or just lie back and soak up the rays.