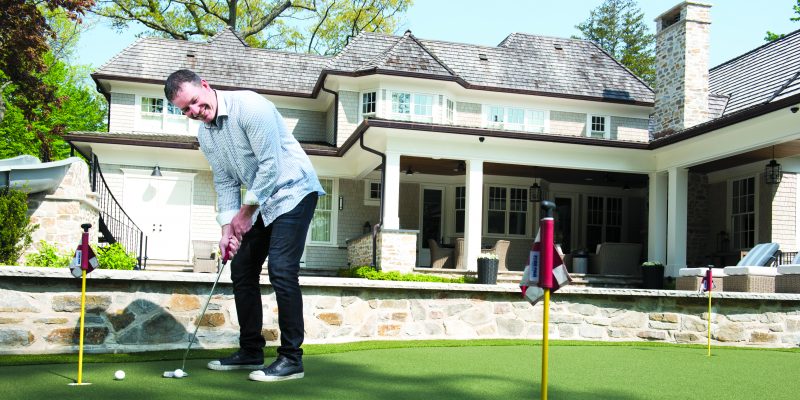 Vikings, A Series of Unfortunate Events, Reign and The Handmaid’s Tale. These are just some of the popular productions behind John Weber’s name.  Beginning his career in 1996 in the accounting department of the television series Kung Fu: The Legend Continues, Weber expected nothing more than to put his Wilfrid Laurier degree and accounting designation to good use. Little did he know, years later, that job in accounting would lead to an Emmy, six Canadian Screen Awards and his very own production company. Through the evolution of Weber’s career, he has served as Executive Producer on over 350 hours of some of the most popular and acclaimed television dramas — and in 2009, founded one of Canada’s leading production companies, Take 5 Productions. From the beginning of his career to the importance of Toronto in film and television, Weber gives us an inside look on his success and Canada’s growing role in the industry.

Prior to founding Take 5 Productions, you worked with Dufferin Gate Productions from 1999 to 2007. How did your career evolve during your time there?

When I started with Dufferin Gate we were producing about 10 movies a year for Showtime. For the first four years, my role was strictly dealing with the financing aspects of our productions. In 2004, my position expanded to include all areas of production for the company. In 2005, I acquired a majority share of the company and took over the position as CEO for the company. In 2007, we sold the company to a publicly traded entertainment company. Through this period, I worked for veteran producer Patrick Whitley, who was the founder of Dufferin Gate Productions. I learned from the best and Patrick’s mentorship allowed me to learn how to build and run a production company.

In 2009, you founded the Canadian production company Take 5 Productions. It’s already an industry leader in its niche — not to mention its impressive portfolio. What has gone into making this company a success?

Our team. We have some of the most talented producers and artists in the country working on our projects. Although we operate in a freelance industry, most of our team has been with us since our company’s inception. We have learned how to consistently deliver quality work, and to put value on the screen. Everyone at Take 5 takes pride in their work and this care translates to a high degree of quality in all our projects.

Why establish yourself and your business here in Toronto and not Hollywood or New York?

I started in the Toronto industry and from the beginning of my career could see the potential of this business in Canada. The Toronto film industry has the talent and infrastructure to compete for film and television production with any jurisdiction in the world. We have studio and supplier infrastructure, government support and diverse locations for filming. All of this is complemented by some of the most talented cast and crew in the world. We have produced in many other global jurisdictions and can confidently say that Ontario can compete on the international scale. It is tough to argue that sentiment when the top awards at this years’ Academy Awards (The Shape of Water) and The Emmy Awards (The Handmaid’s Tale) were awarded to Toronto-produced productions.

Toronto has become a hot destination for filming hit television shows and movies. Do you see this trend continuing?

Yes. Like any jurisdiction, we have our challenges. It’s critical that we expand the availability of studio facilities and that we continue to train and develop crews to service the growing demand for content.  Toronto competes for projects with other large North American production centres including New York, LA, Vancouver, Montreal, Atlanta and Chicago. Provided we remain competitively priced, our crews and infrastructure will allow us to see continued growth.

What was your favourite television show growing up?

Cheers. There still has never been a better cast of characters created for television.

I can’t say I have a “favourite.” There are over 400 scripted series airing on television each year and I have limited time to watch television. I watch numerous versions of all our projects and beyond that, it’s difficult to follow many other series. I also have three sports-crazed children and therefore it’s rare that our televisions are not dominated by hockey, basketball, baseball, football or golf tournaments.

What has been the biggest surprise about working in this industry?

Undoubtedly the talent. The crews in this industry can pull off anything. I am constantly blown away by the talent of the crews. We almost never hear, “That is not possible.” Producers and Directors are constantly pushing to be the best and therefore the creativity and innovation of our crews are challenged. Even after 22 years in this industry, rarely a day goes by that I am not shocked by a brilliant solution to what seemed like an unachievable ask.