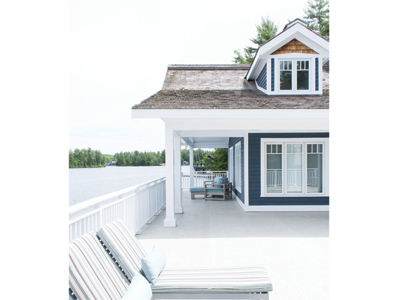 When your view is the cascading Muskoka background and crisp blue waters of Lake Joseph in one of Canada's most prestigious cottage country regions, interior design inspiration is literally outside your window.

“Look outside and pull from that,” is what the client asked of interior designer Pamela Lahey of Burlington's Elizabeth Interiors when they sat down to discuss the design, concept and colour palette for the impressive four-bedroom waterfront lakehouse with  accompanying two-bedroom boathouse.

“The homeowners wanted to bring in the light, and be sympathetic to the beautiful surroundings and create a look and feel much different from their home in the in city,” Lahey says, “different from some of Muskoka's traditional heavy wood association.

The result? A coastal feeling meets soft rustic look creating a cheerful, bright, airy and useful lake house that appeals to multiple generations. Situated along the largest of Muskoka's three major waterways, it's in good company. Lake Joseph is host to an area dubbed “billionaire's row” thanks to property prices reaching as high as $25 million and a list of celebrities including Shark Tank's Kevin O'Leary, Kenny G and Cindy Crawford calling it their second (or third or more) home.

Now there's one more inspirational residence along the lake, designed by the team at Elizabeth Interiors.
Lahey, the lead designer, and Elizabeth Law, owner of Elizabeth Interiors, took one year to complete the project from the time the clients approached them with photographs of the property they had purchased, to full usage of the four-season vacation retreat.

“It's very much a two-sided process,” Law says. “They give us the inspirational idea and we run with it. We take what the homeowner wants, enhance their ideas, and maybe offer some options they hadn't thought of then pull it all together.” On this project, both clients were involved every step of the way.

“Pamela took the lead in the project,” Law adds. “I just added the icing. Then again, the icing is important. It's what makes the cake scrumptious,” she says with a laugh.

Definitely, this is an Elizabeth Interiors magnum opus.

Mostly sourced from Elizabeth Interiors or Liz at Home store, the items were chosen to fit the vision and function the owners had for their lake house property. Radiating light from one end of the interior to the other was a priority, and today sunlight reflects off the clean white walls, accented by a dark wood staircase. Similarly toned wooden accessories, such as breakfast bar stools in the kitchen and main floor master bedroom bedposts continue the accents throughout. Attention-to-detail is everywhere; for instance  pictures of sailboats mirror the building's peaked ceilings.

Crisp clean colours define the overall design theme running seamlessly throughout the two-storey house. The home embraces clean crispness: white walls, white panelling, white sheer drapes and subtle, white architectural features. Punctuating the airiness of a white base, are dabs of blues and greens, such as aqua, teal, moss, and brown mustard, on simple patterned upholstery, in pictures of boats and on throw cushions. “This is not the traditional style of a Muskoka property,” Lahey says, “but rustic and soft ““ not pretentious, and welcoming to guests.”

A sweeping, wide entrance sets the tone for the cottage, providing visitors a view of floor-to-ceiling windows at the back of the cottage. Flanked by a distressed bureau on one side and a vintage wooden bench on the other, the corridor invites guests further into the house.

“There is a bit of a surprise in the entry way,” Law says. “Here, we added some citrus orange and watermelon colours in the form of a tasseled area rug in the middle of the floor.”

It's a little unexpected, Lahey adds, but suited to the personality of the well-travelled homeowners.

On the floor of the entryway, punctuated by a solid dark wood staircase leading upstairs to the bedrooms, is locally-sourced granite providing a touch of stone echoed in a floor-to-ceiling A-line stone fireplace, the focal point of the main floor gathering room.

“Rustic and tactile is the intention,” says Law. “The fireplace stone is very free form, and the dark wood accents throughout are planed rough to look as though you built it yourself, rather than bought something manufactured.”
Yet professional intervention is clearly the mark of the property, extending into the two-bedroom boathouse and back deck, which retain the design aesthetic.

Whether a house is a primary residence or vacation home, furniture arrangement is very important, says Law. “You can have things look very lovely but not work for conversation, socializing, putting your feet up, relaxing or watching television. We sit down with each person and ask about the function of each room. Is there a need to accommodate a lot of people? This will determine the type and style of seating.”

For example, in the conversation room off the cottage's dining room, there is no television, so chairs are grouped for conversation, but they can be easily moved to look out and appreciate the expansive view outside.

Conversely, Lahey says, “the Muskoka Room with stone fireplace is a multi-purpose room with so many elements we had to make it functional by including such things as hidden liquor, games and storage cabinets and a television. It's not stuffy, but had to be organized with a space for everything that's going to be used in that room. Design must always consider the function of the room and what makes sense.”

What's unique about a cottage property, however, is the emphasis on the outdoors. There are generally more widows and more access to outside, which is true with this project.

“This house has a back porch that extends the full length of the house,” Law says. “We created an outdoor living room and they really do live there in good weather. We repurposed existing white wicker furniture by reupholstering it in the colours that create continuity with the rest of the house. But we added some navy blue to add a punch and avoid too much repetition and sameness. It really did set off nicely.”

After a year of careful preparation, this cottage is officially open.