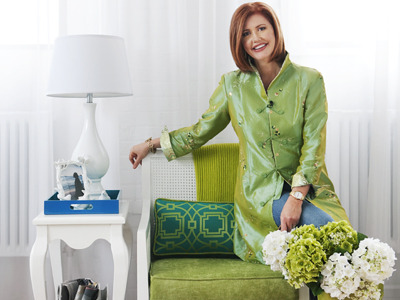 Two years ago, when Cobi Ladner resigned as editor of Canadian House & Home magazine, there seemed to be a collective gasp of disbelief across the country.

For close to 18 years, thousands of Canadian home design enthusiasts ““ amateur and professional alike ““ had been curling up with their House & Home magazine over tea, eagerly reading Cobi's Editor's Message, and soaking in the decorating advice the magazine proffered under her stewardship.

Under her editorial direction, Canadian House & Home (H&H) had become the bible of decorating for all Canadians. During her tenure as editor, readership grew from 619,000 to an astounding 2.5 million, propelling the magazine into the top five of Canada's favourite publications.

With her departure I think many of us felt we were losing a dear friend ““ the one you look up to for worldly advice, who helps you make sense of choices around you, and gives you the confidence to stay the course.

Well, good news: she's back! Cobi Ladner, one of the country's leading design and decorating authorities, has returned to the design world in true Cobi style: like a breath of fresh air.

After two-and-a-half years of product development, Ladner is introducing, fittingly enough, cobistyle ““ a collection of home accessories that bursts with colour and life. At the same time she's giving us the comforting assurance and nudge that colour is okay.

“Your home should make you happy,” enthuses Ladner. “It should be a personal reflection of you and your family's journey, full of life and personality. Colour is an easy way to add personality and pop, and cobistyle is all about offering the elements you need to create a joyful backdrop for life ““ one brimming with colour, comfort and character.”

An idea takes shape
The idea for cobistyle took root during Ladner's days at H&H. “What I was learning from Canadians was that our homes are becoming too beige and homogenous. And while I love neutrals and there's definitely a place for them, overall our homes are now a neutral envelope. The question is: how are we going to fill that envelope?”

Ladner was also amused whenever she was out on the talk circuit and people approached her asking how they should redecorate their living rooms. “I always got a chuckle out of that ““ and still do ““ because decorating your home should be a reflection of you. You're never going to love it unless you've been part of the process and it reflects your personality and character. I realized people were losing their individuality when decorating.”

And so the idea for cobistyle was born: a rich and vibrant product line of furniture, accessories, fabric and drapery from which consumers can choose to create the colourful backdrop to their lives.

Ladner agrees that while there are certain design rules that should be followed, ultimately one just needs to decorate to reflect who they are. “My design philosophy is pretty simple,” she says. “I believe that homeowners should feel happy and comfortable in their home when they use it, and it should showcase their unique journey through life to others when they entertain.

“We've been so concerned with creating things in “˜good taste', we've forgotten about creating things that are fun to look at, or even pretty.”¯ You would think “˜pretty' was a bad word in many design circles.”¯I don't think that's true however for most homeowners. I think people respond to pretty things and colours, and frankly feel starved for some juice in their interiors.”

Living a dream
The decision to leave H&H did not come easily to Ladner.

“At first I was putting it on hold because I was having so much fun in my role as editor. I loved that job very much,” she says. “But there comes a time, when you still have the energy, to just go for it. It was very hard to leave but I had always felt the desire to do something that was my own vision and creation.”

Ladner took that summer off, spending time with her family and fixing up a new summer home on Prince Edward Island. All the while she thought about her idea for cobistyle and decided it was time to bring the idea to life.

With the decision made, Ladner jumped in with both feet. She set up a studio at the Port Credit home she shares with husband Bob Brehl and their two children. Since her husband works from a home office as well, they set up a small cottage-type building in the backyard to serve as her work space ““ one that would give her ample space to lay out samples and artwork.

Ladner has worked hard for two years developing her product line. She laughingly admits that if someone had told her at the beginning that two years was the typical time span for product development she wouldn't have believed them, but says she now fully understands the process and that the two year wait has been well worth it.

All about cobistyle
According to Ladner, cobistyle is all about character, colour, conscience and classics. The products available in the line all reflect a down-to-earth style, high functionality and bear a “˜stamp of approval' that brings confidence and guidance to consumers across the country.

In developing the concept she has worked with leading companies in their respective fields to bring the products to life: Canadian company Décor-Rest for the furniture; fabrics made in conjunction with Sunbrella and Joanne Fabrics; accessories by Canfloyd; and drapery and coordinated cushions by InVU Drapery Co.

“Ultimately this is a line that presents like a colourful bazaar, allowing you to find your own hidden gems that reflect the pop of your own personality,” states Ladner. “All the items have classic sensibilities but many will have a global influence as well, which gives them character. A global influence is also very Canadian.”

The concepts of colour and pattern are also strongly evident and are an easy way to add personality to any room. With the neutral palette in so many homes today, Ladner comments that it's easy to use this as a frame into which to throw colour and character. One tip she gives is to choose two colours and add them to a room for instant punch.

I think homes should be lived in and enjoyed,” concludes Ladner. “¯”At the end of the day, you want to come home to a place that makes you happy and where you have a personal connection. I think the best interiors happen when someone has not only great taste, but the creativity and confidence to show their personality in their choices.”
For more information on cobistyle and a list of where to buy, please visit cobistyle.com