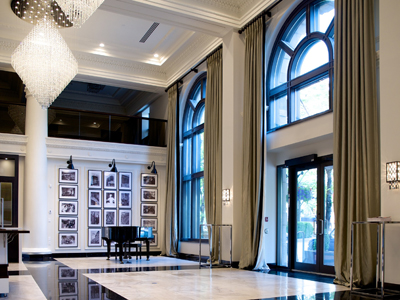 After sitting vacant for more than a decade, Hamilton's historic Royal Connaught Hotel is undergoing major renovations striving to restore grandeur to the city with luxurious condo living.

In 1914 the decadent building, formerly the Waldorf Hotel, was purchased by Harry Frost of Hamilton's Frost Fence Company and converted into the luxurious Edwardian-style hotel, opening its doors in 1916.

Prior to its re-opening, Frost held a naming contest with the winner awarded a grand prize of a $10 gold piece. Alfie Richards, an Ottawa Street School student, suggested the name “Connaught” after Canada's Governor General Prince Arthur William Patrick Albert, 1st Duke of Connaught and Strathearn, and he won. In 1914, while the building was still under construction, the Duke of Connaught granted permission to add “Royal” to the name while helping to lay a cornerstone, and thus, The Royal Connaught Hotel was born.

Built by Pigott Construction, whose CV includes the Skylon Tower, the Burlington Skyway and the Royal Ontario Museum, the opulent 13-storey hotel boasted 244 ensuite bedrooms, all with baths and marble flooring, a convention and banquet hall with seating for up to 1,500, a grill room and bar, barber shop, shoeshine parlour and electric elevators with uniformed operators. Chippendale style furniture, mahogany woodwork and decorated glass dotted the lobby while the sweeping marble staircase invited guests to saunter into the mezzanine.

The ballroom and rooftop patio provided visiting dignitaries and international entertainers with room to dance the night away or take in the breathtaking rooftop views of Lake Ontario and the Niagara Escarpment. The “it” hangout for the well-heeled, celebrity guests of the hotel included Pierre and Margaret Trudeau, Prince Philip, Louie Armstrong, Shirley Temple, Johnny Cash and June Carter, Roy Orbison, Debbie Reynolds and Bill Cosby.

Today, The Residences of Royal Connaught will feature an opulent art-deco lobby with crystal chandeliers, expansive 23-foot ceilings, restored columns and the original glass staircase and mezzanine. Ebony and granite coalesce with white limestone, some original to the building, creating a glamourous feel while gold and bronze accents tie the space together with an air of affluence.

“The Royal Connaught is something incredibly unique, it is an architectural landmark with such a rich and storied history. It truly cannot be replicated or replaced so we wanted to get it right,” says Rudy Spallacci, president of Spallacci Group, who is developing the property in partnership with Valery Homes.

Phase I of The Residences of Royal Connaught will offer 122 new condo suites in the original 13-storey building ranging from 555-square feet to 1084-square feet with units starting in the mid $200,000s and additional phases including units in two new condo towers.

“The Royal Connaught is truly a legacy and its rebirth reinforces the excitement that everyone in this city feels,” says Ted Valeri, president of Valery Homes. “Hamilton is back.”

Phase I occupancy of the building is expected for 2016, exactly 100 years after first opening its doors as The Royal Connaught Hotel.