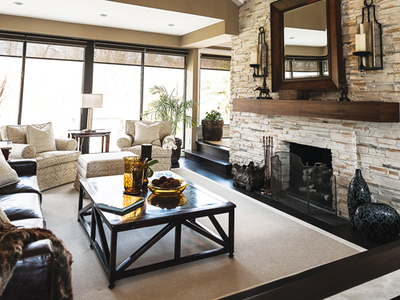 Many people have shown me their homes, proud of the flawless end result that reflects their lifestyle and personal taste. Then they usually share stories about the trials and tribulations of the long ““ sometimes years ““ time it took to see the renovation or design project to completion. Most homeowners exclaim they're not going anywhere anytime soon (if at all) and are looking forward to reaping the rewards of their efforts and investment.

This is not the case for Mississauga resident Roy Aubie. True, he's proud of the house he renovated and designed with Mark Cox, president of Mississauga-based Cox & Ciccone Interiors Inc., but at the completion of the project, he's ready to let it go.

It's a pattern he's repeated four times now. Like an artist he labours over the creation of his home, paying attention to details such as interior lighting, trim and ceiling moulding, energy flow, family usage, and over-seeing trade workers on a daily basis until his artwork is finished. Then when he's done, he's over it and ready to let it go to someone who appreciates it as much as he does.

“Roy loves the process,” Cox says, “maybe more than the end product.” He's remarkably unsentimental about material things, including houses and furniture, sometimes taking only a few personal accessories or artwork with him when he moves out.

“The last house I renovated and sold the buyers took everything: furniture, accessories, even the bedcovers,” Aubie says with a shrug. “So, I dry-cleaned the bedding and they moved in.”

For him, it's a passion more than a task. Formally a clothing buyer and then manufacturer, Aubie, originally from New Brunswick, retired recently and made home renovation and design his hobby “to keep busy,” he says. And all the properties he's purchased have been in Port Credit. “I love this area. Outside the door, behind the large backyard is a marshland conservation area with walking trails, beach, stairs, bridges and streams. It's a great place to walk a dog,” he says, “and something families should have access to.”

Dark tones, some wood paneling, balanced with neutral colours: beige, white, animal prints and natural accents such as the stone walls in the living room and downstairs den define the aesthetic of this home, predominately masculine in feel with clean lines and boutique hotel tailoring. “My friend, who is also an interior designer, says it has an island feel,” Aubie says. “I'm not sure what she means, but I think it's a compliment.” The home does have a vacation, or resort, vibe and thanks to the forest that surrounds it, there's a sense you're miles from city conveniences, when in truth they are walking distance away.

From the front entrance, the backyard is spotted easily through the floor-to-ceiling windows, past the square living room two steps down, that is softened by the textured stone wall surrounding the fireplace and complimenting a large chandelier, a find from North Carolina. When lit, an alabaster globe glows in the centre casting a primitive hue over the dangling feather-shaped droplets individually decorated with gems. The subtle ornate fixture balances the streamlined modern furniture in the rest of the room.

During the renovations, another passage from the sunken living room was added to the kitchen, where dark wood cabinets above the stove, fridge and below the island dance with traditional white cabinets elsewhere. “I've done this type of kitchen a number of times now,” Aubie says, “and I think white kitchens with marble countertops are on their way out.”

Designer Cox doesn't agree that white kitchens will ever be out entirely. “It is a classic,” he says, “but people are slowly tiring of it and changing things up slightly by using taupe or cream.”

Walk down the only hallway, past two guest bedrooms sharing one ensuite bath past a reclining reading chair in front of corner bookshelves, past the dark wood staircase (moved from the front of the house) leading to downstairs and you'll end up in the large main-floor master bedroom. This is a room James Bond would love: it's complete with elaborate square moulded white ceilings, walnut wood paneling behind the bed and a custom tiger-print headboard across from solid built-in cabinet housing an entertainment unit. A small balcony outside the sliding glass doors offers a private view of the pool.

The unique feature of the room is that the dressing area was originally three closets. It's now opened up and visible but organized behind built-in cabinets creating more floor space and flow in the room.

Cox & Ciccone Interiors has worked on four projects with Aubie so far. “He walked into our store 14 years ago,” Cox says, “We've been working together ever since and have become good friends.” This professional relationship works well, and has been renewed each time Aubie finds a new project (including his cottage on the East coast where he drives frequently with his constant companion: a charming terrier named Willie, who sports the same colour palette as Aubie's last two houses).

“Furnishings are all custom from Cox & Ciccone,” Aubie says, “and the fabric was selected and designed by Mark.” However, some furnishings, Cox adds, are Aubie's own, now recovered and re-imagined for the new space.

With a plan from architect David Small, Aubie opened up the entire living space, including the basement that is level with the backyard and an easy walkout to the patio and pool. “The house had been renovated about seven years ago by the previous owners,” Cox says, “and it needed a lot of correction.” For instance, one of the first things both the designer and the owner point out is the windows. There are now more floor-to-ceiling windows framing the outdoor recreation area and larger windows replaced a lot of the narrow 18-inch width cutouts that accented the exterior like ribbons cutting through stone facade.

Another significant change is the removal of a cramped home theatre downstairs, replaced by a bright mudroom, additional storage and a bar and wine cellar adjacent to the plush pillow adorned party room. Beside that is the fourth bedroom, with sliding glass doors to the patio, powder room and additional laundry (there's another in the upstairs) welcoming longer stay guests.

Staying long, however, is not something Aubie does well. He bought this house based on a love of its square boxy architecture ““ very different from the rest on the street ““ and peaked roof that reminded him of the orient, a place he's travelled to often. “When he bought this place, he said “˜this one is the one,'” says Cox gearing up for the next challenge. “Roy loves doing the renos and living it, no problem. Each house and new design is a learning experience for him.”