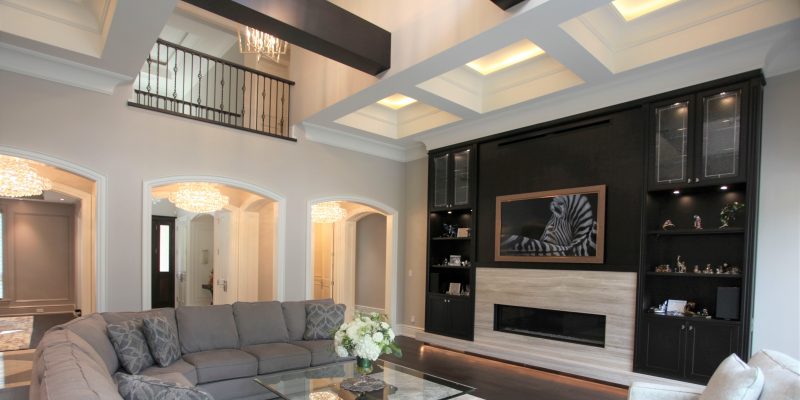 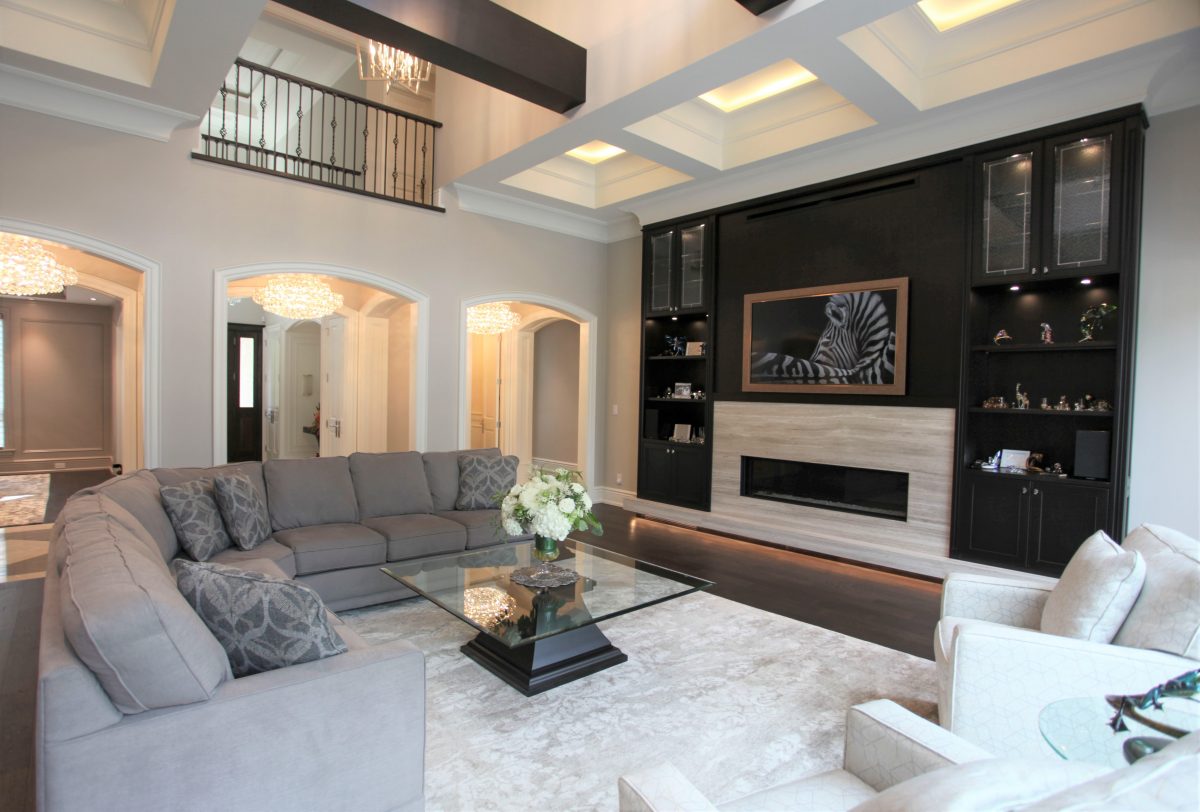 As nature lovers who enjoy spending time outdoors, the Watersedge Road location in Clarkson-Lorne Park ticked several boxes as an ideal location to build their dream home. It was within a two-minute walk to a park and walking trails on Lake Ontario and the backyard was large enough to add a pool and outdoor living space. Despite the expense of having to remove a dated older home that stood on the property, the homeowners forged ahead, with visons of their ideal home dancing in their heads.

“Our vision was to have a home with all of the principal rooms, including the master bedroom, on the main level,” explains the homeowner. “We also wanted easy access to the backyard and to enjoy the view of the yard.”

The home’s timeless stone façade and the sexy curved accent over the front entrance offer a hint of the contemporary elegant design waiting to be discovered in the interior.

Step into the foyer and immediately your eye is drawn upward to admire the soaring ceilings and the stunningly beautiful egg-shaped crystal chandelier. This sparkling beauty adds the eye candy to the entranceway and that can only be topped by the uninterrupted view of the dining room, great room and the backyard beyond. 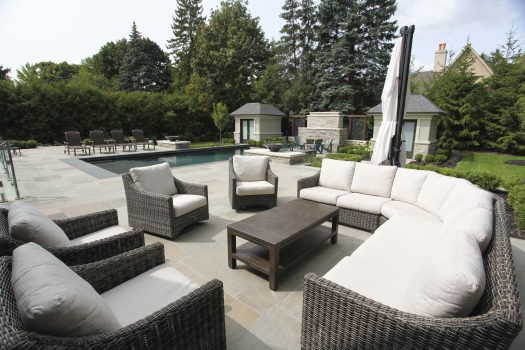 The two-storey home with 9,000 square feet of living space (including the basement), took just over a year and a half to build. The happy homeowners moved in last December.

“Providing detailed drawings allows the construction to move along quickly and efficiently,” explains McLennan. “Contractors really appreciate the level of detail in these drawings, as it allows builders, such as PCM Now, to exceed their already high standards and timelines. We used a consistent colour palette of soft greys, beiges and white throughout which adds a level of elegance, and then we added layers of interest by trimming out the arches, adding coffered ceilings and plenty of crystal and glass chandeliers. The chandeliers act like jewellery and add a touch of glam.”

The dining room is an elegant, welcoming space, wrapped in pristine white wood panelling accented with custom millwork. The crystal chandelier hangs from a mirrored base set into the coffered ceiling. Each rectangle is accented with a relief-like art effect which adds depth, dimension, and interest. “We used various shades of paints to punctuate the coffered ceiling and to really set off the chandelier,” says McLennan. 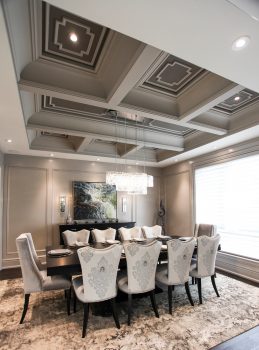 Tasked with the challenge of creating an open concept on almost the entire main floor, McLennan cleverly created a series of curved arches along the main hallway that act as entranceways to the great room, kitchen and master bedroom wing.

“The homeowner wanted columns to create that feeling of openness, so we designed the curved arches to create interest while opening up the space,” says McLennan. “The flooring has three diamond shapes in creamy white porcelain which is inlaid into the light grey porcelain to break up the expanse of the corridor and add layers of detail.” Centred over each diamond are three identical circular crystal chandeliers. Perfectly situated in the centre of the home is a three-level, open-concept staircase with open treads in white oak (stained dark) flanked by custom wrought-iron railings.

Like a magnet, we are drawn to the kitchen which is unquestionably the heart of this home. The homeowners have just made fresh coffee at their custom coffee bar which they serve at one of the two enormous kitchen islands. One serves as a prep area while the other functions as a breakfast bar and backs onto a four season linai room.  The counter tops and islands are topped in light-coloured Caesar stone provided by Marble Plus, while the rich, dark custom cabinetry by PM Fine Cabinetry, adds a dramatic backdrop. The same custom cabinetry is used in the adjacent walk-in pantry/bar area as well as on a feature wall in the Great Room.

The kitchen/great room/linai room are ‘action central’ when the homeowner’s children and grandchildren come to visit. The linai room doors can be left wide open to the kitchen or can be closed to create a separate space. The corner fireplace takes off the chill on cooler days.

The two-storey high ceiling in the family room makes the great room worthy of the name. A section of the ceiling is coffered while two large beams add architectural interest. 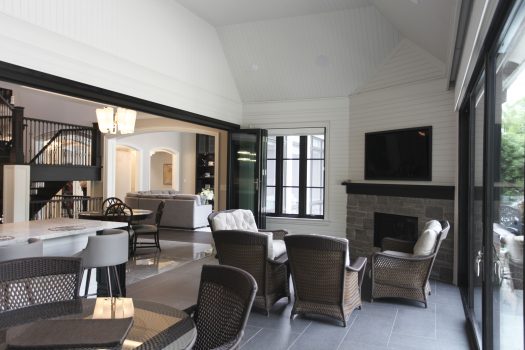 The backyard oasis has a Muskoka resort vibe complete with a linear infinity-edge swimming pool, a globe-like water feature, an expansive stone patio, and a massive stone fireplace which becomes the perfect gathering place for making s’mores.

That stunning backyard can also be enjoyed through the expanse of windows across the entire wall of the master bedroom. Dark-stained white oak flooring adds warmth while the coffered ceilings add interest. Above the modern glass fireplace is a large mirror that transforms into a big screen TV. On the way to the master ensuite, McLennan opens a set of double doors to reveal a huge his and hers walk-in closet outfitted with custom cabinetry in the same rich tones used in the rest of the house.

The homeowners had a few other items on their bucket list for this dream home: a home theatre room, a gym, a sauna, a large family room on the lower level, and four more bedrooms—two in the basement and two on the second storey.

The castle-sized family room features a wall of windows and double walkouts to the pool deck accessed by two sets of stairs with a stepped-up garden feature in the middle. The oversized windows along with the use of more chandeliers work in unison to fill the lower level with light. “We used the same arches and inlaid diamond-shaped porcelain flooring and more chandeliers on the lower level to add glam to this space,” adds McLennan.

Originally the owners intended to build a bungalow but opted to add a second storey to have additional guest rooms. There are two large guest rooms with hotel-like ensuites along with a home office on the upper level. The showstopper however is the hallway that is open on two sides to show off the soaring ceiling while offering a bird’s eye view of the great room and front foyer. Just one more added detail that makes this custom-designed home special.

As Charles R. Swindoll once said, “The difference between something good and something great is attention to detail.”