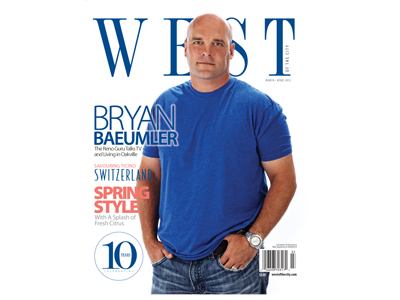 Celebrating 10 years publishing these pages is no small feat. In a world where someone is always harkening the death of “print” we continue to strive for quality and continuity, delivered in as pretty a package as possible. In a decade we have interviewed, photographed and written about more wonderful people than I could possibly name even if I were to fill the pages of this entire issue.  To all those not mentioned here, WEST of the City thanks you for letting us tell your tale. Without your stories we would not be able to celebrate our 10th anniversary. Here are a few of the highlights of a decade in print.

2002
In our first year of publishing, the September cover girl was Ainsley Vince, along with her horse Catch 22. The story was about locals with a passion for riding and included Chris Delia, and was shot at Chris Delia Stables in Oakville, along with fellow riders Glen Yates and Linda Fuciarelli. In 2002, Vince was 25 and a member of the Canadian Show Jumping Team and had claimed victory for Canada with Catch 22 in both 2001 and 2002.

Now, Vince is riding and training students in the hunter, jumper and equitation divisions throughout North America. She has been named Ontario Hunter Jumper Association Jumper Trainer of the Year in both 2010 and 2011. In 2011 Vince and the Darling Syndicate purchased a new mount and Grand Prix prospect “Darling” and are setting their sights on the Grand Prix ring again.

2003
The autumn cover was graced by music legend Oscar Peterson. Editor of the day, Irene Gentle, was granted an interview at his Mississauga home. She was expecting the Peterson of legend: in demand, demanding, and testy with the media. Instead, she and photographer Liesa Kortmann were enchanted by the 78-year-old jazzman, his wife and daughter. They found a humble historian of jazz, living legend and man who could recount memories of days past with Ella Fitzgerald and Billie Holiday.

Sadly, Peterson passed in December 2007 in his home. The music lives on.

2004
It didn't make the cover, but in 2004 local entrepreneur Russ Fearon and his business Throat Threads Apparel Inc. was fast building a reputation for marketing and distributing men's apparel. He was known largely then for his neckwear design company (hence the name), and a fearless plunge into an industry in which he had no formal training. Fearon found a $160 million firm with lines including Tommy Hilfiger, DKNY and Ted Baker that had little Canadian infrastructure. He became their Canadian distributor and Throat Threads topped $7.5 million in revenue by 2002.
Today, Fearon is still based in Burlington ““ in an ever-expanding restored Victorian ““ that houses showrooms for some of the hottest menswear lines of today including Robert Graham, John Varvatos, Napapijri and Ping.

2005
Affectionately known as “Pinball”, Michael Clemons was riding high on a career wave when we interviewed him in 2005. He had coached the Argos to a Grey Cup victory in the 2004/05 season and was named one of Maclean's most accomplished Canadians and was noted as a strong contender for Canadian of the Year, although he wasn't a Canadian. In a word Clemons was “nice.” In fact he could not have been nicer, more gracious or more humble.

Today, he continues his work with the Michael “Pinball” Clemons Foundation (MPCF) by inspiring hope and empowerment through philanthropy, and still lives west of the city.

2006
The Longo family was planning a year-long celebration at their chain of independent grocery stores to mark their 50th year in business. Anthony, one of 10 children of the original three Longo brothers working in the business, and CEO posed for our cameras. It was a time of growth and change in their industry, and Longo's was right there with the big guys, moving into gourmet prepared foods, new products and a great shopping experience at their 14 stores.

Today, there are 24 Longo's locations plus a distribution centre, and they are arguably still at the top of their game.

2007
This was the year of “green” in publishing. We were all answering readers calls for better, healthier, more organic and ecological. In our summer issue we visited a local business Jelinek Cork, whose family owners had been involved in the ecologically sound venture of cork since 1885. The Jelinek brothers ““ Sonny and Jay ““ were a charming duo, who explained the renewable resource while showing off their restored 1816 home that acts as showroom for a myriad of cork products.

Today, you can explore some of the innovative cork products in their showroom, and as I do, think of them every time I have a bottle to uncork.

2008
The restaurant dynasty of Oliver & Bonacini was about to unveil their move into Oakville. The restaurant had been quietly built and kept under wraps ““ even the signs in the parking lot were installed without a name ““ to make the reveal a surprise. Chef Michael Bonacini invited us into the kitchen to watch him work, while he shared his story and some of his favourite foods.

Today the soft-spoken Welsh chef continues to expand his dining empire with Bannock and Luma and has penned a cookbook with fellow chefs Massimo Capra and Jason Parsons.
2009
This cover, with Khachi grinning away as we photograph him in a client's Mississauga home, marks the start of a wonderful friendship between he and WEST of the City. Khachi had already made a name for himself with television appearances, and invited us to one of his latest finished projects. The article and images were beautiful, but even more so was the personality and demeanor of the interior designer.

Since then, Khachi has done us the honour of playing host for a number of consumer events WEST throws in the community, as well as being an invaluable resource in the design world.
2010
Cover girl Harmer had been in the news while speaking out for the protection of the Niagara Escarpment, and as founder of Protecting Escarpment Rural Land (PERL). We did our best not to get completely focused on the ongoing political fight to talk about what was happening in Harmer's musical career. She had just released her fifth album, Oh Little Fire, to critical acclaim. Harmer's heart belongs in Burlington and that can be seen in her social activism.

Today, the decision of an OMB hearing about the fate of Mount Nemo is awaited.

2011
Ron MacLean makes the second of his two appearances on the cover of WEST. In 2002 he had just been reinstated to his Hockey Night in Canada post, after the CBC bowed to massive outcry from fans after severing a 17-year relationship. He was sidelined for just three days.

We visited with MacLean again in the winter of 2011, hotter than ever with appearances on Hockey Night in Canada as well as the newly minted Battle of the Blades, also on CBC. We shot him relaxed, at his Oakville home where he still lives with wife Cari and their beloved dog Lewis. His first book, Cornered, was recently published.
2012
The first issue of the year debuted with a bold new look as the start of celebrations for our 10th anniversary. The reviews were good, and were even better when we put home reno darling Brian Baeumler on the second edition of the year.

It's early June as I write this, and I am still getting compliments and fielding questions about Baeumler. Brian, if you're reading this, your fans really, really love you.