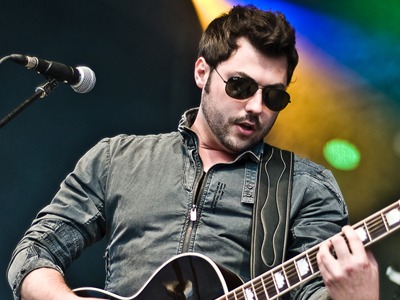 Ah, the challenging life of the singer/song writer. Financial obstacles aside, it's a careful balance. First, you need the introspection of a writer who lives primarily in his head quietly cloistered away writing and composing songs. Then, you need the extroverted personality of a performer desiring the stage, the spotlight and the validation of an audience. Add to that the hurdle of making a living as a musician marketing his own debut CD at the age of 28 and you begin to understand Oakville resident, Andrew Cole's intensity, oscillating viewpoints, and unwavering belief that a Canadian-born, British-raised crooner with a strong Liverpool attitude can beat the odds and dominate itunes download charts.
Released in June of 2010, Why We Wonder is Cole's debut CD of his own songs, produced on his own label called Crier Records and distributed in major music stores in Canada, and of course via download from Cole's website (andrewcole.ca). Artists Tom Cochrane and Kathleen Edwards also perform on the disc.
It's an introspective collection about love, yearning and the little beautiful things that complicate the youthful mind. Like good wine, Why We Wonder gets better when you let it breathe ““ don't judge it the first time, but let each seemingly melancholy song seep in, one at a time, while sipping … well, a rich merlot.About his first release, Cole says the title is intended to be sarcastic not heavy. “I'm cheeky,” he insists over coffee at an Oakville coffee shop, “I didn't want anyone to take the title too seriously. It's the kind of humour Mike Myers would get. I considered calling my first album The Best of Andrew Cole, and then the second would be Greatest Hits.”
Now, that would have been funny and a joke most would get. But listening to the dark-eyed, nattily dressed Cole with a Jim Morrison-like intensity describe his creative process, musical background and opinions about the Canadian music industry, it's hard to believe serious isn't an essential part of his vocabulary.
“Before I record, I know in my head what a song in suppose to turn out like,” he says. “While in the studio, I already hear the record done. But it's difficult to get the pieces out of my head and they don't always turn out like I thought they would, which is good.”
He says he finds recording a challenging process, both because he's a self-proclaimed perfectionist and technology has allowed artists to work in isolation when recording. “Everyone has their own equipment at home they prefer using, so they send me their parts of songs over the internet or we discuss it on the phone instead of working in a studio together. It kind of ruins the recording experience for me,” Cole says. “For instance, I hope to work with Ron Sexsmith on my next CD and I want to be in the same room with him because I'd learn so much.”
Although Cole arrived at our interview just back from talking to Alex Lifeson of Rush fame about playing on a new song, he says his next CD is very much in its embryonic stage. He does, however, know his sound will evolve (like a personality) and his next effort will be “full-on rock and roll. Like George Harrison meets…” He doesn't finish that thought but recalls a friend saying a song on Why We Wonder sounded like a ramped-up John Denver tune. “That really put me off,” Coles says candidly, but then retracts. “Don't get me wrong, I love John Denver.”
So are we to assume the next album is George Harrison meets a “Rocky Mountain High”?
Not likely. What he can confirm is more danceable music. “My mother says I can't keep playing mournful songs because people can't dance to them. However, I have no intention of being upbeat for the sake of it.”
It will also be the first time he's written a song with someone else, and true to Cole's style, he aimed high. Marc Jordan, who has written hit songs for Cher and Rod Stewart, will apparently be given co-writing credits on an upcoming Cole offering.
Despite claiming it's not about who you know in the music industry, Cole seems to have benefitted from connections. A photographer who works often with fellow Oakville resident Tom Cochrane, connected Cole to both Tom and his wife Kathleene who is now Cole's manager. It was the Cochranes who in turn connected Cole to song writing collaborator Jordan.
And somehow, it all gels in Oakville ““ not exactly known as the new music incubator of the country. Yet, Cole says he loves this city and arrived here about four-and-a-half-years ago on holiday to check out houses and neighbourhoods. He came to Oakville to visit a friend, and one house in that neighbourhood was for sale. He bought it right away, even before he sold his own home in England.
Cole, born in Toronto to a father from Liverpool and a mother from Wales, says his parents moved from Canada back to England (a mistake he says they'd make another six times during his childhood) shortly after he was born. “After my father died, I was sick of being a yo-yo. So I decided to settle in Canada.”
Despite a notable English accent and a vocabulary littered with English idioms (i.e. “Tom is always banging on about Oakville.”), Cole says he feels more Canadian than British.
“I love the community here,” he says, “and the lake, and the things that happen here. I play a few pubs in Oakville and everyone has my CD. My hairdresser plays my CD in the salon, my mechanic, my butcher, has bought my CD and they know me in the HMV in Oakville Place.
“When people want to hear you and your music it's important because it really is about the fans. I used to think that was garbage, but it's really true. I've got more to say, which is good because if I don't people are going to get bored.”