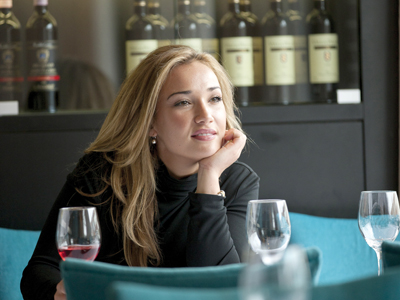 For years, actress Ashley Burton shared stories with friends about her hilarious Sicilian family. But in the summer of 2008, when Burton ran into an acquaintance, something “magical” happened.

The producer of SummerWorks Festival UnHinged asked Burton if she had a show for the upcoming festival just 30 days away. Immediately Burton said yes and went home to write Nonna's Party.

“In my mind, I always had a show. My passion is telling stories, so when I sat down to write it came very easily,” says Burton from her Oakville home. In three days I had a one hour, one-woman show done!”

In 2008, Burton directed, produced and performed in Nonna's Party at the UnHinged Festival on Kitchener's Victoria Park Island, and starred in Cabaret at Stratford Shakespeare Festival. After the Stratford company actors heard that Nonna's Party received rave reviews at UnHinged, they asked Burton to perform it for them.

“Stratford's artistic director and all these amazing Shakespearean actors were listening to my little comedy,” proudly explains the Oakville-born resident. “They said I had to take this to Toronto!”
Nonna's Party had its Toronto debut at TIFF Bell Lightbox with a sneak 20-minute performance on January 28, 2012 where guests enjoyed a five-course meal featuring celebrity chef Jason Bangerter from Oliver and Bonacini, Canteen, and Luma.

Burton's not interested in the glitz and glam of show biz. “I want to have the confidence to pursue my passion and have the courage to put it out there, that's what I want to inspire other people to do.”

This triple-threat artist has been performing for audiences since the age of five. She became a competitive dancer with Oakville's Canadian Dance Company and competed across Canada and the United States for more than ten years. She majored in drama at Oakville's St. Ignatius of Loyola Catholic Secondary School and, at 18, took up singing before studying musical theatre at Toronto's Randolph Academy for the Performing Arts.

Four months after graduating from Randolph, Burton got an unexpected present the night before Christmas. “The actress who played Lisa in Mamma Mia! was offered the role of Penny in Hairspray, so I auditioned for the role of Lisa with 50 others. On elimination day when they were down to 12 of us, they called me in to sing “Honey, Honey” and asked if I wanted the role,” explains Burton. “It was a dream come true when they said “˜Merry Christmas, it's yours!'”

After a successful two-year run in Mirvish's Mamma Mia! at the Royal Alexandra Theatre, Burton starred on television shows like The Latest Buzz, CTV's Instant Star, XIII, and Nothing Personal opposite The Sopranos' star Steve Schirripa. Ashley also performed in Mirvish Production's Rock of Ages.

For Burton, integrity and authenticity is most important in the roles she chooses. “That has to come through my work. Without that I'm not interested. That's why I think Nonna's Party is doing so well right out of the gates, because it comes from the heart,” admits the multi-talented artist. “It's out of love that I do this. It's
been a gift.”