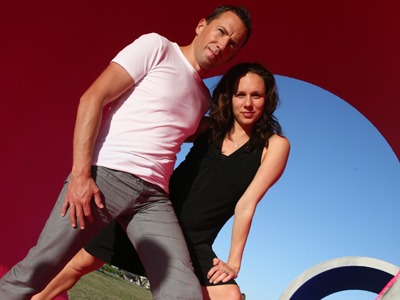 It took a massive crane to lift the weighty 13 tonne sculpture, Eye See You by artists Barbara Glazar and Ryan James, onto Australia's Bondi Beach last November.
The concrete art forms ““ one eye-popping blue and the other vibrant pink ““ both eight feet long and seven feet in diametre were exhibited at Sydney, Australia's Sculpture by the Sea, the world's largest outdoor sculpture exhibit. The innovative husband-wife team created an interactive sculpture for the free-to-the-public art event.
“We really like it when the audience is engaged. Eye See You is a very social piece, so it was really nice to see everybody going through it and really experiencing the colour,” recalls Glazar. “It's all about them participating.”
Glazar and James named the commissioned sculpture, Eye See You because of the connections made between their contemporary concrete structures.
“There's a relationship between them,” Glazar explains. “The way they were situated up on the hill overlooking the ocean ““ you could look through them ““ they seemed to be looking at each other on the cliff.”
“The name is also about the relationship between Ryan and me ““ looking at each other when creating Eye See You,” says Glazar who was pregnant with their daughter, Allegra at the time.
James who grew up in Oakville, knew Barbara through her sister, his high school acquaintance, but it wasn't until the couple was living in British Columbia that they became friends and formed a working relationship.
Their first collaboration was in 2005 on a CTV Bravo!FACT short film, Wearing the Unknown featuring Barbara who is a ballet dancer trained at Toronto's National Ballet School and Stuttgart, Germany's John Cranko Schule.
“I always wanted to do a dance film. I kept talking about the project and asking for Ryan's opinions ““ everyone involved loved his ideas, so we asked him to be art director. That's where everything started.”
James, who earned a Bachelor of Fine Arts from the Ontario College of Art & Design and a Masters of Fine Arts from Istituto Marangoni, London, UK, created sculptures and installations for the Bravo!FACT film.
Soon after, the couple worked on another dance film, Traces of Emotion and a painting commission in Vancouver. Once they started travelling, they expanded their repertoire to include international and larger scale work like Eye See You.
They've also completed more than 40 commissions for Lululemon Athletica in North America and Australia. “Toronto's Bloor Street location has a lot of our art. You'll notice on the Bloor Street storefront that the colours we used relate to those in Eye See You in Sydney,” explains James.
The duo travels worldwide for their work, especially to Switzerland's international art fair, Art Basel.
“We love to see other artists' work and love participating and communicating with artists,” remarks Glazar. “Art Basel is a huge show with art collectors, writers, critics, academics and artists, from all over the world.”
Recently Glazar and James formed a non-profit company to improve hospital environments worldwide with innovative art by leading contemporary artists, architects and designers.
“We want to inspire patients, visitors and doctors in hospitals. I think hospitals in the future are going to be designed friendlier and become more of a place for healing, not the sterile environment that it is right now,” remarks James.
The artists are installing a private commissioned piece in Los Angeles later this year, and look forward to the opportunity of showing their work at Oakville's Gairloch Gardens in the next two years.