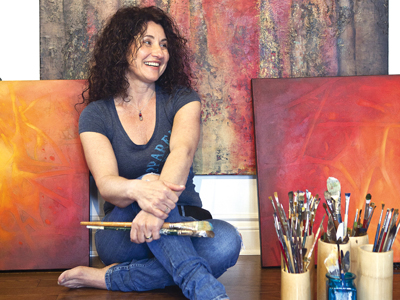 As the morning light streams through the picture window of artist Beata Goik's Oakville home, she sits back to think about what inspires her.

“My subject is always light and texture. That's been my focus for a very long time and of course colour too. Light is very symbolic for many painters throughout the ages ““ many focus on light and the contrast between light and shadow,” explains Polish-born Goik.

“For me, light symbolizes divine presence in a person's life,” says Goik who studied pastoral care and worked as a Chaplain On Call at Mississauga and Toronto hospitals. “What I have experienced naturally leads to subject matter dealing with life and death.”

Goik's vivid paintings are shown at Toronto's Arta Gallery in the Distillery District. Her new series focuses on organic elements symbolizing inner emotions. As her work evolves, elements like natural environments, trees or faces change, but colour and light are prominent in her textured vibrant art. “This series is much more courageous than I've ever done,” says the artist.

After studying at York University in 2004 and earning a teaching degree, she helped to develop the Visual Arts Department at Mississauga's Bronte College. “With the support of their dynamic principal, Mr. Dave Davis, we built a portfolio of students from around the world,” she says. When Davis left Bronte, Goik's husband encouraged her to fulfill her dream of being a fulltime artist, so she put her teaching career on hold.

Last year, Goik was invited to the Jordan Art Gallery, near Niagara-on-the-Lake for their Guest Artist Exhibition. In May 2011, she was one of 12 international artists invited to a painter's symposium in Greece, but suffered a tragic loss when her husband suddenly passed away during their travels there.

Looking for solace and tranquility, she found inspiration on a recent trip to Kinsale, Ireland. “I fell in love with Ireland immediately ““ the contrast between the sky and ocean and between the green grasses ““ they have 40 shades of green there,” comments Goik. “Kinsale is a lovely small town, something like Oakville, located around the water. I tend to choose towns like that because the community is much closer.” After spending several months painting there in a room with a view, she created 10 paintings now on exhibit at one of Kinsale's local galleries.

Whether it's showing her artwork, teaching or writing, Goik remains involved in the arts community. When she co-directed and co-produced a multi-media show for Mississauga and Toronto audiences, collaboration came together at the Oakville Jazz Festival.

“There were gospel singers at the lake and people were sitting on the grass really enjoying their music,” recalls Goik. “I was looking for music to accompany my script, so when the group ““ mostly from Jamaica performed ““ it was fantastic. I told them about my vision, invited them to my house and a half a year later we put on the show in Mississauga at John Paul II Polish Cultural Centre on Cawthra Road.” The first performance had more than 700 people in attendance including dignitaries from Jamaica and Poland.

As Goik prepares for her upcoming solo show, she reflects, “Art is about vocation and not about training ““ that's more about technicalities. Art is like a calling that penetrates your entire being!”