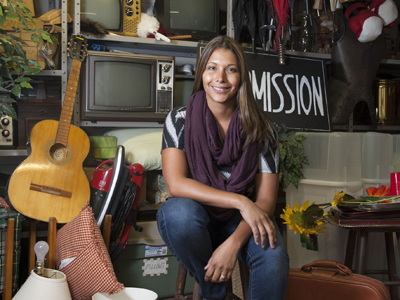 After receiving an Ontario Trillium Foundation grant, Burl-Oak Theatre Group contacted Chantal Forde. “They wanted to put on a family friendly show, a pantomime and asked if I'd be interested,” explains Forde, director and co-writer of this year's performance: Snow White: A Holiday Pantomime.

“Most of their shows are for adult audiences, so this was new to them.” Not so for Forde. She had been doing pantomimes for years. In fact, that's how she met Tim Cadeny, her husband, and co-writer of this year's Burl-Oak holiday show. The couple ended up working in the same pantomime in Vancouver.

When they moved back to Toronto, Forde and Cadeny created Oakville Pantomime with Burl-Oak Theatre Group. Forde directed the holiday productions of Cinderella in 2013 and Peter Pan in 2014, with Cadeny performing the lead role in both.

Forde wanted to change things up for this year's production. To reach an older audience as well as children, Forde and Cadeny chose some of their favourite fictional characters to  include in the Snow White script. “Everything from Star Wars to Pokémon to The Hunger Games,” she says. “What inspired us to choose those different characters is we wanted the humour to hit at all the levels ““ that was our main goal.”

Directing a cast of 30 can be challenging, as performers have to adjust to everyone's ability. Striving to make the performance the best it can be, Forde taught the large group to dance, and worked on comedic timing as some cast members are performing for the first or second time. “Getting timing and pace is always a challenge or it's not funny anymore,” she explains. “Sometimes it's a cross between a rehearsal and an acting class, which is fun.”

What can audiences expect this year? “Lots of audience participation. There is always a dame, who will be our evil menacing, Harry Queen,” says Forde.  “Audiences are encouraged to cheer for the good guys and boo for the bad guys. They are in charge of warning the good guys if they are in trouble ““ they are their saviours.” Audiences will receive special magical wands to help save characters in need.

Forde is also an instructor at Shadowpath Theatre Productions where she teaches drama to seniors. Last month, Forde was the first to garner Shadowpath's Artist of the Year award on Culture Days, for her outstanding contribution to the organization for performance, playwriting, drama instruction and concept creation.

Defining moments in Forde's career date back to the summer of 2009 when she acted in the Fringe Festival. “In those short summer months of being back in Ontario, we got so much artistic education and experience that we made the move back because of the richness that Ontario offers through the government and all the communities that have events,” she says.

It was a turning point in the director's career when she attended a Canadian Stage workshop with William Finn that summer.

“After he read one of the songs that I had written for his workshop, he stood up and said, “˜There is something genius in this,' and that may have been an influential moment, where I thought writing was where I wanted to go.”

It's been a slow transition from actress to writer/director for Forde. “The more I did that the more I fell in love with it. Definitely, writing and directing have become my passion!”