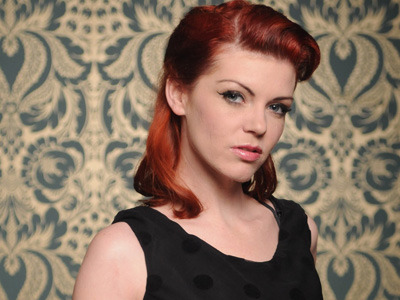 As her name would suggest, Ginger St. James is a red-hot singer with looks that could thrill and who teases and tantalizes her way through a performance with brazen reckless abandon. She ain't no saint; she's a sinning singer who's having a whole lot of fun.

In 2002, St. James first landed on stage ““ legs and all ““ in Toronto as a member of Les Coquettes, one of the first burlesque troupes in Canada to revive the old vaudeville tradition. Her love for Broadway tunes, dance and theatre, outlandish costumes (or lack thereof) led her to form her own group in Hamilton, the Steeltown Sirens. “That opened a lot of doors because it gave me a platform for singing,” she says. People took notice of her voice (and a little more). “I was asked to participate with various events and that gave me the confidence to pursue different projects.” One of St. James' trademark acts was a comedic burlesque routine where she would get stuck in her clothes. “I'm a klutz, so it was kind of funny,” she admits.

Born and raised in Binbrook, St. James always had a deep-seated desire to sing, and she did when she was little, though only to herself. “I'd never let anybody hear me,” she recalls. “It didn't really come until later when I started going out seeing live bands, seeing there was this whole other world, especially with the music, burlesque, and theatre that I thought “˜I want to do that and be up there'.” The voice was always there, but she didn't become a gal with a guitar until later, being mostly self-taught. “I took a lesson ““ or two ““ when I was young,” she laughs,  “but I never stuck to anything.”

St. James' bio reads like a sexy thesaurus, but does she consider herself an exhibitionist? “I suppose at one point I would have when I was running the burlesque,” she admits. “But I think just as a performer you are kind of an exhibitionist because you have to be unafraid. Performing a song that you've written can be compared to taking your clothes off in front of somebody because you're really bearing your soul ““ baring it all ““ to the audience.” Interestingly enough, the stage is her platform, the only place she says she feels totally comfortable. “I just like to entertain and people can see that when I am on stage.”

Do people perceive her the same way they might interpret her songs: naughty, brazen, bawdy, sultry or sassy? “Ya, if you get to know me,” she laughs. “There're a lot of different sides of me. I'm a joker, and a jackass quite often. I'm sarcastic, I can be smart-mouthed but I can also be sweet. I think my songs do represent all sides of me and they come from different experiences.”

St. James' musical taste is a list about as long as a feather boa. In the car she blasts dance music; other times jazz, punk, rock and roll or rockabilly are the playlist of the day. “I grew up with such a diverse influence of music,” she says, owing her paradoxical preferences to her grandparents, who listened to big band and swing, and loved musicals. During her early years, car rides with her dad meant listening to country hits. Trips to hot rod shows gave way to the backdrop of rock and roll. “All of the influences are genuine,” she states. “˜I don't peg myself as one certain way. I draw influences from everything.”

In May 2010, St. James finally released her first album, Spank, Sparkle & Growl, which she recorded with The Grinders (Snow-heel Slim (Guitar), Andre Tellier (Drums) Greg Brisco (Keys), and Tyrone Ramsey (Bass)). “Most of the songs were ones that I'd had already in the bank for a long time,” she says. “Swing About You”, “Boom Boom Room” and “Lullaby” were the ones that I'd held onto for the longest.” The CD itself is a potent cocktail of vaudeville, cabaret, and rock and roll filled with double-entendres and rhythms that tease, but all in good fun.

With plans to record a new album this year, and probably a tour, most of the material is already written in her latest lyrical style that resembles “Lonely Cryin' Blues” and “Devil Dance” (on her current CD), with more of a country blues sound rather than swing. Keeping her finger on the pulse (or the pasties) of the art of the tease, St. James is an affiliate with Great Canadian Burlesque, producing shows. “One way or another I'll be involved (with burlesque) ““ but the clothes stay on!”

See it Live!Don't miss Ginger St. James performing live music at West of the City's Girls Night Out on May 25 at the Oakville Conference Centre.
For more information visit www.westofthecity.com.