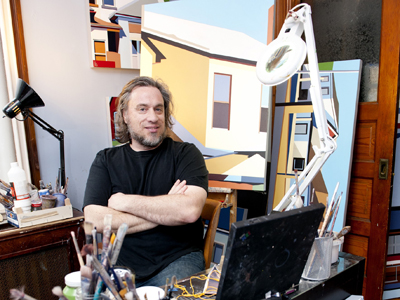 It was in 1996 that Gordon Leverton moved to Hamilton from Chatham, Ontario. A life-altering repositioning, Hamilton would become not only home, but a city that propelled  Leverton to become one of today's most talented Canadian artists. It is Hamilton that is key to his inspiration and subsequent success.

Referring to his paintings as “urban landscapes”, Leverton's claim to fame began with his semi-abstract light and shadow creations of Hamilton houses. Not as much about the houses themselves, Leverton explains, “It is more about finding the abstract in them. It is less an homage to the houses as it is my way of expressing colour, form and shape. I use the houses as a conduit.”

Born not of an artistic family, Leverton, 46, was unaware of his own talent until his early thirties. Though adept at writing and music, it wasn't until the birth of his son when he surprised himself. “I was doodling to fill in the napping hours to discover I loved the outcome! I was latent, and that part of my life allowed me to focus on something and it happened to be drawing. I couldn't get enough…I would draw pictures of babies…anything…my creativity was vented.”

Leverton took on this creative dawn with a passion and the result was an unique artform that portrayed urban architecture and decay. Soon experiencing a career boom in 2007, one of his paintings was launched at the University of Toronto, which he says in turn gave him a sense of legitimacy.

Significantly, it was again in 2007 when Leverton's work first appeared at the Toronto Outdoor Art  Exhibition at Nathan Phillips Square. Having been an avid devotee, this was monumental in both Leverton's life and future as it introduced him to a Toronto audience of buyers and galleries for the first time. Says Leverton, “That was a big coup as it gave me the confidence I needed to say “˜I belong here'.” Proving a major boost to his self-reliance and career, July 2014 will celebrate eight consecutive years that Leverton's art will be showing at the Annual Toronto Outdoor Art Exhibition!

“When you have successes it is never as big as the first one. Where once I was in awe as a spectator ““ suddenly there I am. Where most people gauge success in terms of monitory, in the arts success is rated on a more personal scale. It was a very big step for me and my career.”

Leverton was unveiled from that moment on and has since experienced levels of great success. His use of buildings or their fragments and negative space created through shadow and light technique has created a national stir. A valued component of the Hamilton community, he is a member of several guilds and artist groups including The Art Gallery of Hamilton, Hamilton Artists Inc., and The Artists Network, and is an elected member of The Society of Canadian Artists. His artwork has shown in The National Gallery, Art Gallery of Hamilton, Todmorden Mills Museum, Ogilvy Hall in Montreal and the Tom Thomson Memorial Gallery. Currently, his work “Duckworth Street” (2012) can be viewed on the set of Big Brother Canada 2.

Not one for looking ahead, Leverton's shifts in his art are gradual. Using sharper lines and brighter colours as of late, he says, “I can see me becoming more abstract…but honestly I look forward to what I will be doing in 20 minutes.”

Leverton is a happy man. Less driven and more at ease with his art, he rides the waves and works fluently. In tandem with his loving family and the city he adores, his life inspiration lies in his own backyard.

“I love, love, love what I do. I think it is a way to find out who I am. I get to diagnose myself through my painting and at the core it has given me people I could never have hoped to meet otherwise. Gifted I am by talented and humbled people and the community of Hamilton.”

To view the art of Gordon Leverton, visit The annual West Hamilton Artists Tour May 10 and 11 when 10 studios throughout Hamilton's Locke Street South neighbourhood open to the public, including his studio/residence at 114 Stanley Ave.