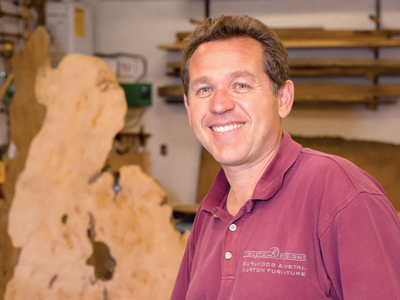 John Koletic of Koletic Designs in Campbellville doesn't necessarily live on the edge, but his furniture is all about it.

Koletic specializes in “live edge” furniture, notably dining room tables, coffee tables, desks and cabinets. This edge, though no longer living, is the unfinished strip of bark left on a piece of lumber often sawed off at traditional lumber yards, but not if Koletic finds it first. In all his designs, he leaves hints of the wood's origins celebrating grain, bark, uneven edges and even the shape of burls.

Burls are gnarly growths on tree trunks or roots resulting from some kind of environmental stress, and vary from the size of a fist to the size of a car. In fact, Koletic is the owner of a ten-foot slice of California Redwood burl, a possession so prized it shares garage space with his red Corvette, which he shows off (the burl, not the car) with pride, musing about the stunning signature piece this asymmetrical slab of rare wood could manifest, with his help of course. In fact, his two-floor studio located next to his family home is filled with wood, and he fawns over each grainy plank, each slice of burl, as proudly as he shows off his finished products.

What is the source of all this raw material, especially the rare and exotics? “That's the question everyone asks,” Koletic says, “especially regarding endangered species.” Clearly, he's not looking for that type of wood. He buys from a number of suppliers: locally, tree removal services give him trunks that would otherwise get burned or chipped; internationally, he buys from only FFC certified companies. “Every tree is traceable,” he says. “All taxes are paid and certified suppliers make sure trees are replanted and land owners are remunerated properly, similar to fair trade coffee.” That's important, he adds, because there is a big black market for rare wood.

Once the municipality called him after chopping down a 150-year-old maple to expand a landfill site. “Instead of dumping the tree,” he says, “it became a piece of furniture that's a legacy to that tree.”

In addition to the uneven edges that nature creates, a hallmark of Koletic's designs is intense wood grains that result when wood is slow dried (unlike commercial lumber) over months if not years. “The cells don't collapse fast,” Koletic says, “and this helps stabilize the wood bringing out the grains.” These are further enhanced by oiling the wood and sometimes applying layers of lacquer.

The beauty of the materials in their natural form is what clearly inspires him, and has for 22 years since starting his business after leaving a career as an aerospace instrument technician.  His precision technique is not about mass production but old world craftsmanship and attention to detail, such as metal-free joints. He says there's a six to eight week turn around time for a custom order based on an existing design, and up to 12 weeks for an original design. Two full-time carpenters assist in the shop producing custom crafted furniture reminiscent of Frank Lloyd Wright meets the Sierra Club. Yet the style he's perfected, which he calls “refined natural” not rustic, is new in the eyes of trend chasers.

What Koletic has been doing for decades ““ blending the natural and unfinished with the polished and modern ““ is now en vogue, resulting in attention from condo dwelling urbanites who might have dismissed his work as “cottage-y” years ago. Once reserved for Muskoka retreats, this look is currently the earth chic of city lofts and suburban homes. The wood tones of visible exotic grains warm the minimalist concrete and stainless steel interiors.

According to Koletic, designers are attracted to his combination of metal accents with natural woods, and people are especially drawn to the grains of rare species, such as Italian Olive and red-infused Manitoba Maple, because they don't see them much. As someone who creates pieces intended to last for generations, he's not worried about bucking, or outlasting, the trend.

“What I think about trends,” he says, “is they make more people aware of the look, so more people will like it. Yes, some people will move on to the next thing, but others will continue to like it for the rest of their lives.”

People are also attracted to the drama of his large scale pieces, such as hefty eight or 12 seat dining tables sporting deep red and brown grains, highly lacquered finishes, and asymmetrical live edges that make the furniture the focal point, if not conversation piece, of a room. These are the items Koletic uses to garner attention at the One of a Kind show in Toronto every fall, and on his website, that lead to the residential commissions, now the bread and butter of his business.

Today, about 90 per cent of his business is crafted custom work based on a catalogue of styles Koletic Designs has to offer, and all can be modified in size and wood type making each piece individual and scaled to the customer's requirements. However, not all clients dole out thousands for his pieces; side tables start at $400, coffee tables $600 and candle holders $50. His work is surprisingly accessible.

One of Koletic's inspirations is George Nakashima, a 20th century American furniture designer who's credited as the grandfather of live edge style. “He was an architect,” Koletic says. “I originally wanted to be an architect, but instead studied aerospace instrument design. I've always wondered where I'd be if I'd gone into architecture.” Watch Koletic in his studio and there's little mystery to that question. Chances are all roads (and trails) would lead him here ““ to a 4,000 square-foot garage-style studio space surrounded by stacks of lumber inside, and acres of live forest outside.