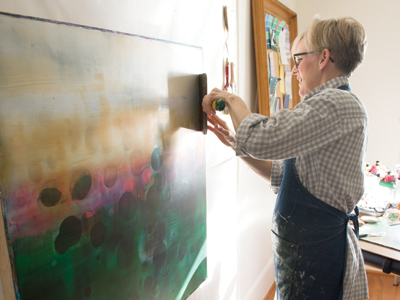 At first glance Julia Mori's “Wedding” collection looks like a series of wedding photographs. Take a closer look and you'll see the guests' faces are blurred in her abstract representation of a faded family photo.

“That started when we were invited to a wedding at The Hunt Club,” says Mori. “The Hunt Club has an infinity edge as it's up at the bluffs. Suddenly I saw these figures that were hanging with the white sky behind them ““ I got so excited!” Two of Mori's first oil paintings from “Wedding” won two years in a row at an Oakville juried art show.

When Mori was invited to another wedding at The Hunt Club, she took 500 photos as the photography perspective is a starting point for her artwork. “Every time you think you're going to see something, it's different, whether the light is different or it's the movement of the people,” she says. Julia's paintings can be seen at Toronto's Abbozzo Gallery and XC Art Restoration, and at Ottawa's Wall Space Gallery.

Last summer when Mori was in Georgian Bay, she became fascinated with smooth rocks and took 1,000 photos. “I had a lot of figures on these rocks. I somehow want to obscure figures into the abstract,” she explains. “We are hardwired to see the human face and figure in any location. That goes back to our prehistoric selves. It's a challenge how far you can abstract the figure, how much can you hide it and still see it.”

Mori's recent work is created using the squeegee method developed by famous artist, Gerhard Richter. Julia's custom wood panels support many layers of oil and wax that she applies using spatulas from metal trowels used for plastering. “I load up my paint and wax, and mix the two together. Scraping the two, I slide them on like butter and scrape it off and butter it on and scrape it off,” she says.

On large plastic resin sheets that look like smooth cutting boards, Julia uses palette knives to mix paint. She puts her spin on Richter's method of sliding on wet paint. “I scrape it off to create an archival quality as I dig back through the layers.” Even though there are 50 layers of paint and wax, Mori's paintings have a smooth “honed” marble quality.

The Oakville artist's work is diverse. “Natural Geometry” is her unique collection of black, white and grey, geometric patterns on live edge planks that are kiln dried, some weighing up to 50 pounds. “In 2012, I went into a lumber yard for people that make musical instruments and furniture, says Mori.  I was only planning on staying a minute as I was looking for a square base for something and I left three or four hours later ““ my head was exploding.”

Up until that point, Mori's “hard line architectonic” geometric patterns were on geometric shapes that presented a challenge for the artist as she needed perfectly square and level panels. “When I saw these completely amorphic shapes for the first time, it was like a whole change of plans,” she says. Mori did three shows with the big planks and had great success, but because they were too heavy to work with, she went back to using custom made squares.

Mori's work is forever evolving. “I have figurative happening in the abstract right now; it literally changes all the time and morphs into the next thing,” she explains. “I strongly believe you can't stop experimenting, you constantly have to explore!”